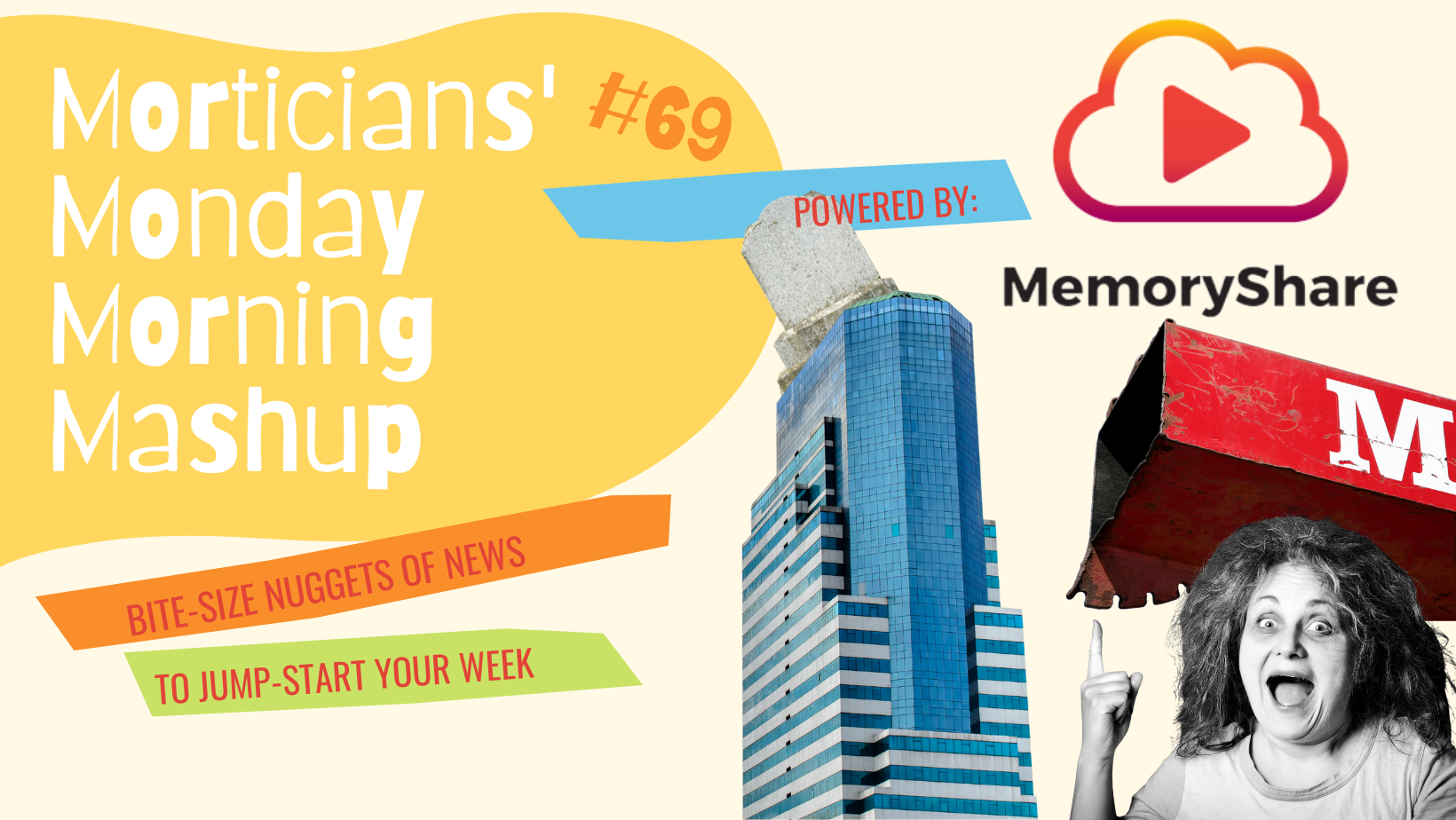 Welcome to the sixty-ninth edition of Morticians’ Monday Morning Mashup, 4M #69, where we’ll serve up bite-sized, easily-digestible nuggets of the deathcare news you need to crush conversations in the week ahead. Bon appetit!

Brazilian soccer phenom Pele was laid to rest last week in a manner deserving of a record-breaking athlete. After an eight-mile funeral procession that purposely routed past adoring fans lining the streets of his hometown as well as his grieving mother’s home, Pele was laid to rest in a record-breaking cemetery. The 14-story Memorial Necrópole Ecumênica is a one-of-a-kind structure that since 1991 has held the Guinness World Record for tallest vertical cemetery in the world. Although it resembles an apartment building or motel, the Necróple contains 14,000 burial vaults as well as crypts, a crematorium, a mausoleum, a tropical garden complete with a waterfall, a small rooftop cafe, and a classic car museum (of course). Pele will reside on the seventh floor.

Another record-breaker, but not a good one

Meanwhile, Trinidad and Tobago, the southernmost island country in the Caribbean (and, incidentally, the birthplace of the limbo and calypso music), has just recognized a less-desirable record-breaking phenomenon: The deadliest year in its history in terms of murder. In 2022, 600 of the island’s 1.4 million residents were murdered. This beats the previous murder toll of 550 set in 2008. The record no one wanted to break is being attributed primarily to a rise in gang violence, with many attacks claiming multiple lives thanks to automatic weapons. Authorities and community groups are grappling for solutions to the issue.

We knew well before New York’s Gov. Hochul signed natural organic reduction into law on December 30 that the practice had its fair share of detractors, including the Catholic church. However, now that the legalization of NOR has been widely publicized, the Internet is reacting in all kinds of ways, including with conspiracy theories and snarkiness.

In case you missed it …

… And if, perhaps, you’re interested in assuming a new role, here’s a portion of a press release that appeared just last week: “Sterling Martin Associates, an executive search firm which specializes in recruiting talent for associations and other non-profit organizations, has been enlisted to find the next executive director for the Funeral Service Foundation (FSF), the philanthropic voice of the funeral profession and the charitable arm of the National Funeral Directors Association (NFDA).  FSF’s executive director is responsible for directing all functions related to the operation, administration, and communication of the 501(c)(3) charitable organization, said Sterling Martin Associates. The foundation has annual revenues of approximately $2 million and a staff of three professionals.”

A nod to efficiency?

A Kentucky woman was charged with a string of crimes last week after stealing a funeral home van and then pulling a gun on an eye doctor and the people in his waiting room. According to local reports, Love Phelps, 48, is charged with attempted murder, wanton endangerment, burglary, receiving stolen property, terroristic threatening, menacing, operating on a suspended license, and resisting arrest after driving a stolen funeral home van to an Eye Health office, asking for the doctor, and threatening to kill him while brandishing a pistol. She eventually left the office, where she was promptly arrested, and, we assume, the van was returned to the funeral home — without the intended deceased body inside, thank goodness.