Last Things: Detailing All the Ways to Die in Maine — With or Without a Funeral Director 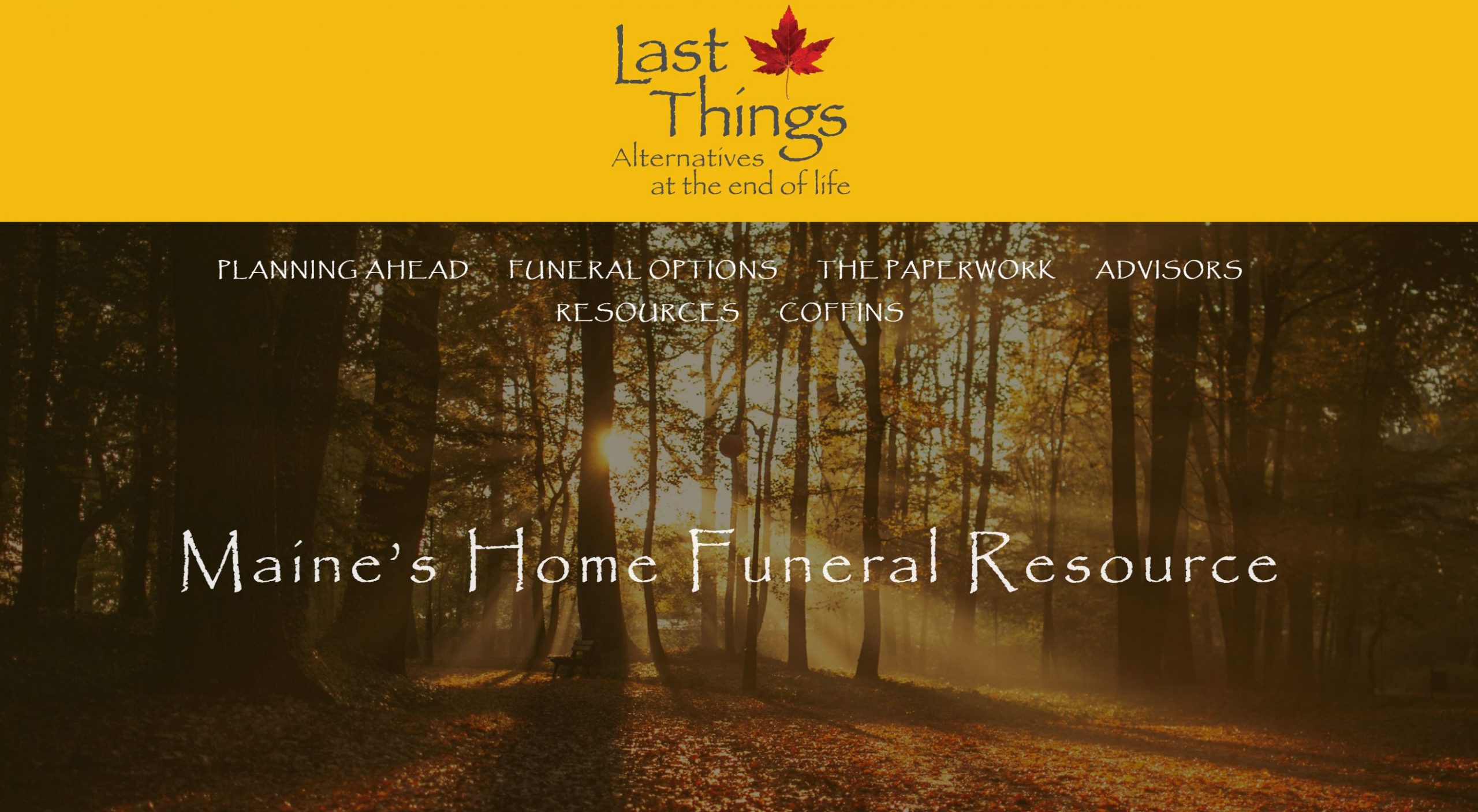 Last Things: Detailing All the Ways to Die in Maine — With or Without a Funeral Director

Chuck Lakin didn’t set out to become one of Maine’s premier authorities on home funerals. A reference librarian by trade, Lakin hadn’t given much thought to embalming, funerals, cremation, or burial at all — until his father was diagnosed with metastatic lung cancer. The handling of his father’s subsequent death would haunt Lakin for decades. The experience also prompted him to create the Last Things, an altruistic, not-at-all-for-profit endeavor that educates others on their end-of-life alternatives.

20 years in the making

“I wanted to be part of whatever happened next,” says Lakin of his father’s passing, “but I had no idea what I could do. We called a funeral director who did what I’m sure he thought we wanted him to do, which was to arrive promptly, zip him up in a body bag and haul it away. Four days later we got a box of ashes in the mail. I just hated that. We didn’t have a chance to say goodbye.”

Twenty years later, Lakin ran across a manual written by someone who helped families take care of their own deceased loved ones at home. The ideas in the booklet struck a chord.

“I started talking to people about home funerals,” Lakin recalls, “not trying to convince them to do that, but to give them the information they would need to have in order to have the experience I wanted to have when my father died. It just kind of grew from there. [Last Things] is my way of giving people the information they need to make a good decision about what happens to their body after they die.”

Although the site is tagged as “Maine’s Home Funeral Resource,” Lakin’s Last Things offers more than just information about home funerals. Likewise, many of the resources and options are available to those outside of Maine, Lakin’s home state.

“Basically, the only stuff that’s applicable just to Maine is how to do the paperwork,” Lakin explains. “You have to follow the laws in your particular state. They’re very similar. They use different words, different forms, or different procedures, but most resources apply anywhere.”

Last Things offers a ton of data in its relatively small site. For example, the Funeral and Burial Options page covers consumer rights, home funerals, green burials, direct cremation, alkaline hydrolysis, burial at sea, and whole body donation, among other options. The Coffins page offers information on compostable coffins, links to coffin-, urn-, and shroud-makers in Maine, and guidelines for making your own coffin by hand.

The Paperwork section walks visitors step-by-step through the death documentation process, including a list of necessary officials. There’s even an incredibly detailed section with links to resources like books, videos, organizations, hospice choirs, and death doulas.

Written in easy-to-understand language and chock-full of helpful hyperlinks, Last Things is up-to-date, clear, and most certainly consumer-friendly — but that doesn’t mean it’s intended to alienate deathcare professionals or discourage anyone from working with you.

Not all or nothing

“When I first started doing an adult education program in the Augusta and Winthrop [Maine] area, a funeral home contacted me and asked me to come talk to them,” Lakin recalls. “They wanted to know what I was doing. At the end of that conversation, we realized we were basically talking about the same thing, except we were coming at it from two different sides. We’ve been friends ever since. But there are a lot of places that will not talk to me.”

For Lakin, Last Things isn’t an anti-funeral home endeavor. He encourages pre-planning to both relieve stress for loved ones and reduce costs at the time of need. For each funeral or burial option, the site provides unbiased guidance about doing-it-yourself, letting a funeral director manage the process, or “blending” these options. A blended option for a funeral, for instance, suggests working with a funeral home, but handling some things themselves, such as keeping the body at home or making their own coffin.

“I keep telling people, ‘Ask for what you want,’” Lakin says of working with a funeral director. “If you don’t tell them what you want, how are they going to know what it is?”

On the other hand, sites like Last Things may not have come about if the same information was always made available by deathcare professionals.

In Connecting Directors’ 2021 Deathcare Survey, nearly 25% of respondents cited “educating families and the public at large” as one of the top professional challenges of 2020. In fact, education efforts ranked right up there with rising cremation rates and working with difficult people. We’ve recently seen that 33 of our states’ regulatory organizations’ websites failed in providing adequate deathcare information to consumers.

If you’re not offering this information either in-person or on your website, and the states aren’t, either, Last Things and other grassroots efforts like Lakin’s will. Frankly, Lakin would love for you to be more forthcoming with both traditional and alternative end-of-life options. Until he’s sure that you are, though, he’ll continue educating the people of Maine and beyond through Last Things.

“I don’t know what most funeral homes talk about,” Lakin says. “[But] I think a lot of people would be pleasantly surprised and impressed if a funeral director would do more to talk to them about all the options, including home funerals or direct cremation, instead of saying, ‘OK, here are your choices and you can pick one.’”