How Do Funerals Work Without Funeral Directors| FFFW #21

How Do Funerals Work Without Funeral Directors| FFFW #21

THE END IS HERE (…THE END OF JANUARY)

We’ve made it, y’all! This is our last Friday of the first month of the new year. Sidenote: how many months does it take before we’re no longer in the “new” year? At what point does it become an “old” year, or even just like a “middle-aged” year? I don’t know, oh well, I’ll ponder that question at some point when I should be sleeping. Anyway, at the ole FFFW, we love to celebrate everything- including the passing of months. With that being said, here are the top three coolest things that happened this month!

What year was the first hearse with a combustible engine created?

Funeral homes and any death-care business NEED a good social media presence. This isn’t always as easy as it seems. BUT… if you’re looking for an easy way to get some likes on your page, we have you covered!

1) Babies. People love babies. They’re chunky, they’re small, and they just randomly stare at people a lot. That being said, if you see a picture of a baby on social media and you DON’T engage with it – you actually are a bad person. Like no joke. Well, kind of no joke.

3) Puppies and Babies. That’s right; it’s not rocket science. Babies do good, puppies do good, you combine them, and you get something simply amazing! This is like french fries dipped in a Wendy’s Frosty; it’s simply a combo that is almost too good to be true!

Now, these three types of content are fantastic, but if you want a social media strategy that REALLY works for you and your funeral home – you need to do a little more than that. You need DISRUPT Media.

DISRUPT Media understands that creative/digital marketing can seem complicated and can be confusing. They take care of all the stressful stuff and make social media simple for you. With years of experience and proven strategies, they know how to use social media to gain leads, build awareness, and grow your business!

Watch this whole GIF for a satisfying ending!

THE MOST REMOTE FUNERAL DIRECTORS

How close are you to the nearest McDonalds? Take a minute and look it up. Right now, I have 23 within 10 miles of me. The truth is, if you’re in America, you’re never too far away from some golden arches. A researcher found out that in the continental U.S. the furthest you could ever be from the clown house of goodness is 115 miles by the way of the crow. That just goes to show how connected we really are here in the lower 48. It’s hard to imagine ever being further than a couple hours away from a Big Mac or a Vanilla Cone (Well, to be fair, the ice-cream machine is ALWAYS broken…). But, where people are, death is. Where death is, funerals/cemeteries are, and where funerals/cemeteries are, Connecting Directors is going to be. That’s why we’re bringing you this story on the most remote place where people hold life celebrations. Welcome to Tristan Da Cunha.

Tristan Da Cunha. This place has been a fascination of mine for the past several months. It’s the most remote inhabited island in the world, and is also a volcano. That’s like two fascinating things tied into one. But then get this, everyone there is British. A relic of the “the sun never sets on the British empire” era of world history. This little colony is over 1500 miles from Cape Town, Africa (the closest major civilization) and is home to 264 British citizens.

So, in a place THAT remote and THAT small, what does the process of death-care even look like?

Well… it’s not like it is here on the mainland. For example, this island doesn’t have any funeral homes on it. Zero, zilch, nadda. All of the body prep for burial takes place in the local hospital. The lack of a dedicated parlor doesn’t mean they don’t give a proper send-off though. Remember this, their current population is 264 people, and that’s made from only 9 surnames. When someone passes away, they’re not just losing a community member, they’re losing family.

RABBIT TRAIL: Woah wait? “Tristan Da Cinha? Isn’t that that song from Lion King?” Yeah, I thought the same thing, but no, Tristan Da Cunha doesn’t translate to “no more worries for the rest of your days,” actually, according to Wikipedia, “The islands were first recorded as sighted in 1506 by Portuguese explorer Tristão da Cunha, though rough seas prevented a landing. He named the main island after himself, Ilha de Tristão da Cunha.”

And according to their website, the whole island treats every death as a family matter. Here’s what they say

“Whether family or not a passing touches the hearts of the whole community and this is when you see islanders not only as a community, but as a family. The flag is flown at half-mast and if this occurs on a weekday work will be stopped as a mark of respect. The Albatross Bar closes for that evening and there are no celebrations unless permitted by immediate family. A group of young ladies will visit island homes to collect flowers that will be made into wreaths by some of the island ladies.

With every funeral a small service is held at Camogli Hospital for relatives and friends, before the departed is carried to the Land Rover waiting outside and then driven through the village to St Mary’s Church. The Reverend and Lay Ministers lead the way with the mourners following close behind. After the church service the procession goes to the cemetery, where the community with heavy hearts say their final goodbyes. Islanders will then visit the home of the bereaved to give them comfort and sympathy.

As with any event on Tristan, the community pulls together whatever the occasion and this keeps us strong.”

Grief dogs are the goodest employee’s. 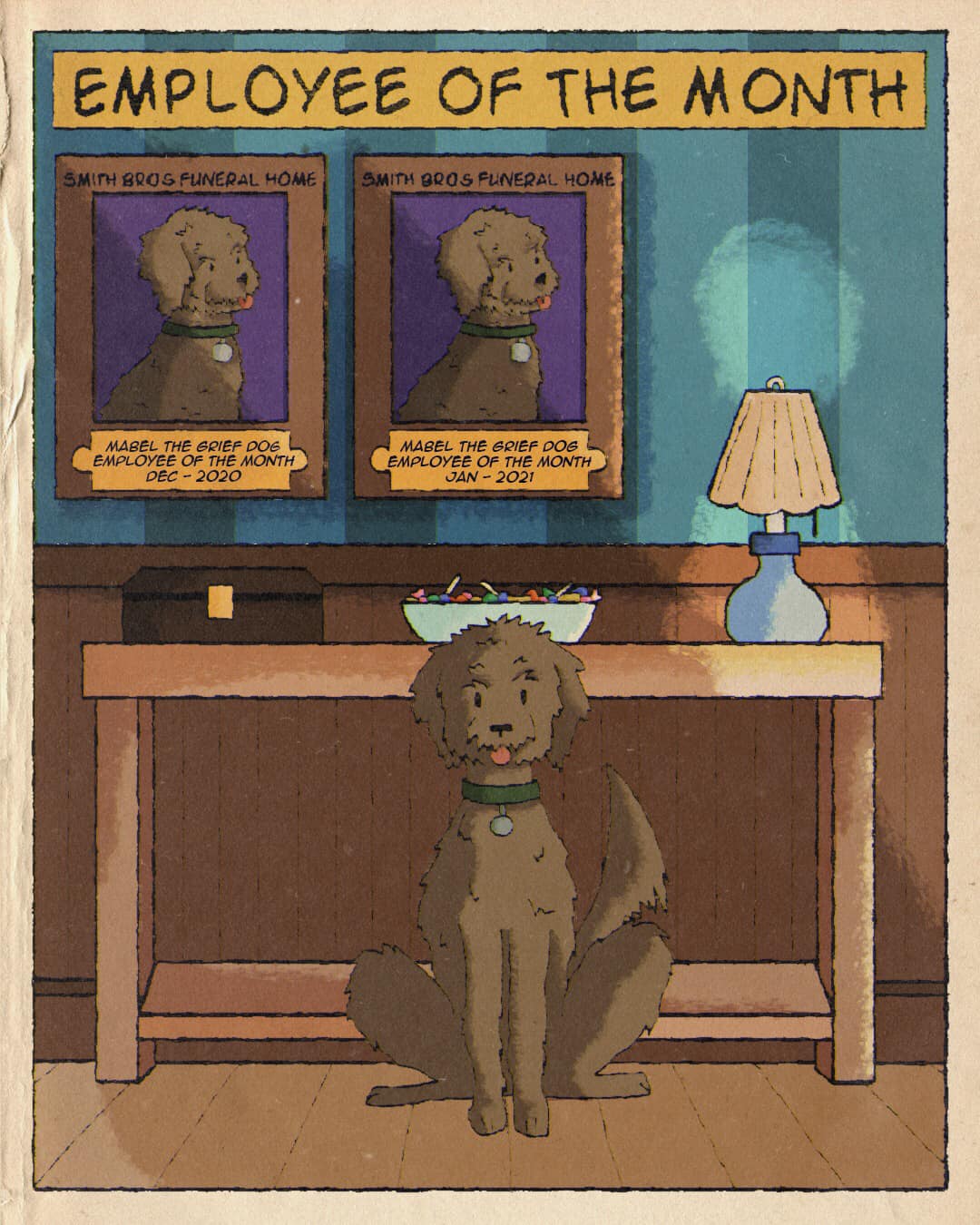