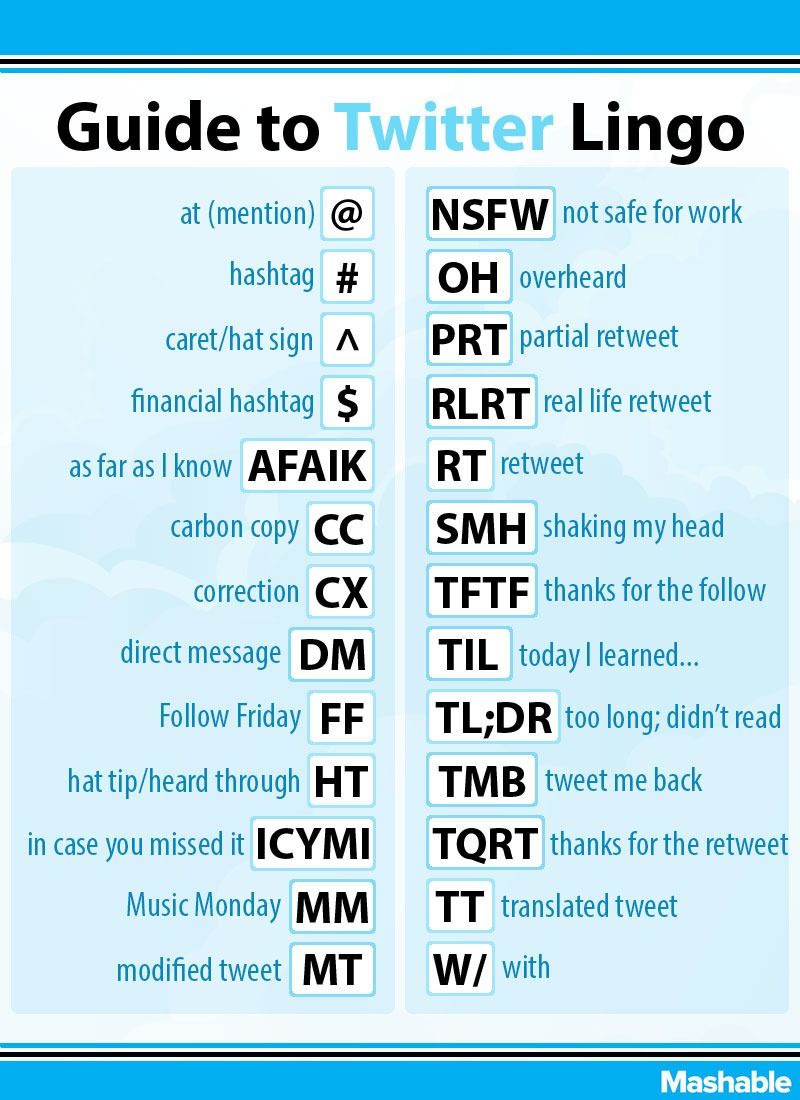 Here at ConnectingDirectors.com, we live and breathe Twitter. However, sometimes we see a tweet containing an acronym or an abbreviation with which we’re not very familiar and many funeral directors face the same issue.

If you find yourself in the same situation, then take a look through our handy list for a complete glossary of terms you may come across in tweets.

While some abbreviations and acronyms may be common across all social media sites, others are unique to the microblogging platform. Browse our guide, and be sure to shout out any terms we’ve missed in the comments below.

The “at” sign is used to mention another Twitter account (e.g., @CDfuneralNews). Within a tweet, it becomes a link to that user’s profile. You may see it used in a geographical sense, such as “I’m @ the office,” but this is just text-speak and not Twitter-specific.

The hash (or pound) symbol is used to highlight keywords, topics, events or even emotions in a tweet. Using a hashtag turns the word or phrase into a link that lets you see other tweets containing the same tag. Examples: “Loving the #weather,” “Watching the #SuperBowl,” “Headed to #NFDA2013,” “#funeralnews.”

The caret, or hat sign, is used to denote a tweet composed and sent by an individual on behalf of a group account used by multiple people (often a company or organization) account. It usually appears at the end of a Tweet and precedes initials, to indicate which user sent the tweet (e.g., ^JS).

The dollar sign is used on Twitter before a company’s shortened stock market name/code as a kind of financial hashtag. For example, $STON (StoneMor), $SCI (Service Corp. International) and $STEI (Stewart Enterprises). Within tweets, codes prefixed with the dollar sign will become links.

CC’s literal meaning is “carbon copy.” As with memos and emails, CC is a way of ensuring a Twitter user sees certain content. Used with an @ mention — for example, “Interesting article – www.urlurl.com – cc @Bob” — it will help draw a Tweet to someone’s attention.

Direct message. A way to privately message someone who is following you on Twitter. As the only way to have a confidential conversation on the platform, it’s usual to see public tweets with “DM me for more info,” or “I’ll DM you details,” etc.

#FF… The excellent @PatrickKingsley, on the ground in Cairo

Occasionally styled H/T, “hat tip” is a way to give a polite nod to the person who originally shared content you are tweeting. Similar to giving someone a “via” (which is a phrase also used on Twitter) a HT will be followed by an @ mention giving a namecheck. For example, “Useful article – www.urlurl.com. HT @Bob.” Some suggest the meaning is “heard through.” This is a less common definition, but is pretty much the same sentiment.

“In case you missed it.” Often employed when a Twitter user retweets his or her own content from earlier.

“Music Monday” used to be a popular way to suggest music you were currently enjoying or artist recommendations. It isn’t used very often now, though you may still see a few #MM tweets at the start of the week.

Modified tweet or modified retweet. This means the same as “retweet” but used to show that you’ve edited the original tweet, usually due to space restrictions.

“Not safe for work.” This term denotes potentially inappropriate or graphic content.

“Overheard.” Although in the wider world, OH is more likely to mean “other half,” on Twitter, it’s a way of reporting a humorous or eyebrow-raising comment.

OH: ‘I’m not kidding, they use IE6 in their office’

Real life retweet. Similar to OH, RLRT is used when you tweet a notable quote from someone “in real life.”

Retweet. Forwarding another user’s tweet, usually with an added comment, letting the “RT” abbreviation mark the end of the forwarder’s comment and the start of the original tweet, e.g., “Must watch! RT @Bob: This video is cool www.urlurl.com.”

Shake/shaking my head. An expression of disbelief or disappointment. Can also be used to express puzzlement — “scratching my head” — although this is a less popular usage.

TIL: Kummerspeck is the perfect word. German for weight gain from stress eating. Literally translates to grief bacon (via @jacoblogansmith)

“Too long; didn’t read.” Can be used literally to indicate content that was too lengthy to wade through to the end. However, the term is more likely to be used in banter, or as a dismissive comment or insult.

“Thanks for the retweet.”