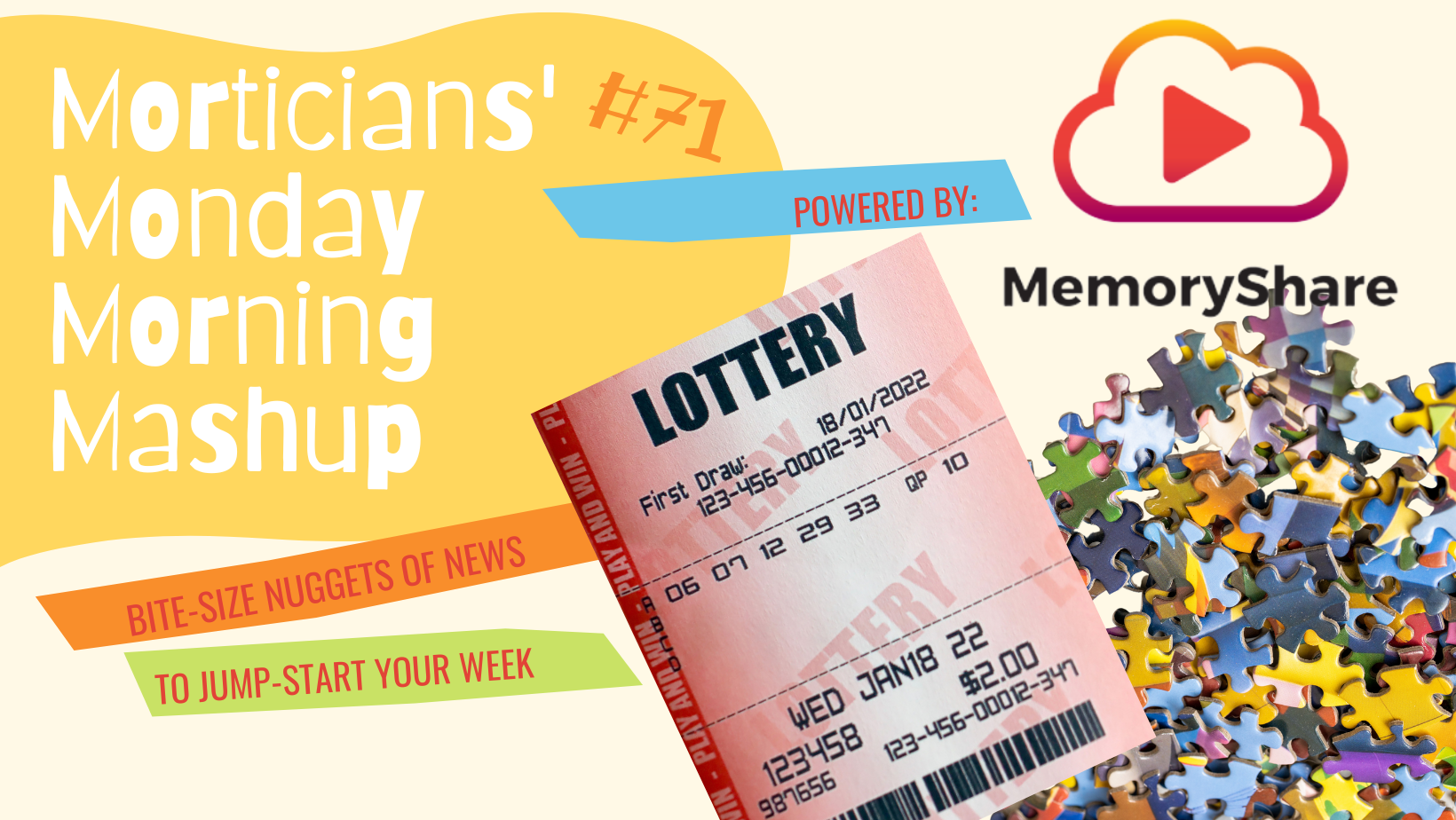 Welcome to the seventy-first edition of Morticians’ Monday Morning Mashup, 4M #71, where we’ll serve up bite-sized, easily-digestible nuggets of the deathcare news you need to crush conversations in the week ahead. Bon appetit!

Putting all the pieces together

Puzzle lovers from all over Wisconsin are gathering at a Reedsburg funeral home — and it’s not to pay their respects to a deceased jigsaw enthusiast. Nina Grasse, owner of Grasse Funeral Home, has opened her spacious building to people of all ages hoping to complete the world’s largest puzzle — a massive 60,000 piece image of the globe that highlights iconic landmarks across the world. According to the folks at Guinness, the record for completion of the jigsaw puzzle with the most pieces (551,232 to be exact) was achieved by 1,600 economics students in Vietnam in 2011. That one measured more than 3,600 square feet in size. There’s no word on the size of Grasse’s finished piece, but even if it doesn’t break any official records, it’s quite an achievement to draw in so many folks from the community for such a fun event at a funeral home.

Is a Corvette hearse next?

Earlier this month we shared the first-ever hearse crafted from the Tesla Model 3. Now, a British hearse manufacturer has come out with an “electric coffin carrier” based on the Ford Mustang Mach-E. According to this piece by Carscoops, Coleman Milne, which also produced a Tesla Model S hearse, recently unveiled the hearse, which features a “coupe-like roofline” as well as  “muscular wings and tapering window line.” Coleman Milne has also created a Mach-E limo that seats seven and offers an additional 4.5 inches of height, which could “make it look almost as wild as the lead car.” If these options are a little outside of your price range, you can be grateful, because as Carscoops comments, you don’t want your funeral procession “upstaging the star of the show” — the deceased.

Makeshift morgues going up in UK

For the first time since the spring 2021 height of COVID, temporary refrigerated mortuaries have been set up outside at least one English hospital. According to the BBC, Salisbury District Hospital erected the facility, which is protected by round-the-clock security, on January 4 to “accommodate an increase in need.” Earlier last week, the BBC published a report showing that more than 650,000 deaths were registered in the UK in 2022, which is 9% more than the 2019 death toll, and “represents one of the largest excess death levels outside the pandemic in 50 years.”

When reporting on Lisa Marie Presley’s death earlier this month, most outlets have detailed the many deaths that punctuated the 54-year-old’s too-short life, including the death of her father, Elvis, when she was nine and the 2020 suicide of her only son, Benjamin, 27. When discussing the latter, some reports have reminded readers that the tragedy prompted Lisa Marie’s daughter Riley Keough to explore death and grief by becoming a death doula. In a 2021 New York Times interview, Keough says of her journey, “That’s really what’s helped me, being able to put myself in a position of service,” she said. “If I can help other people, maybe I can find some way to help myself.” Sadly, that grief was something with which Riley’s mother Lisa Marie was still struggling, as some of her last posts on Instagram shared an essay she had written for People magazine in honor of National Grief Awareness Day last year.

Should he have to pay rent?

A deceased inmate has been a resident of a Mississippi morgue since his November death, and his mortician “landlord” is more than ready to help him find a new home. The man, who died in the state penitentiary, was transported to the funeral home at the request of a family member. When the funeral home contacted the relative to complete arrangements, however, they were nowhere to be found. Now, the funeral home is petitioning authorities to have the case approved for a pauper’s burial. In order for that to happen, the coroner must conduct an investigation to “make a determination of indigence.” Because there was a family member involved, that investigation never happened. An investigation is pending, but there’s no ETA on a resolution.

Ronda Isaac, a funeral director in North Carolina, is $150,000 richer after winning a Powerball prize in the state’s education lottery. Well, technically, she’s $106,876 richer after taxes — but that’s enough to fulfill her oft-delayed dream of double knee replacement surgery. “When you work standing up all the time, that’s pretty exciting,” Issac told state lottery officials.