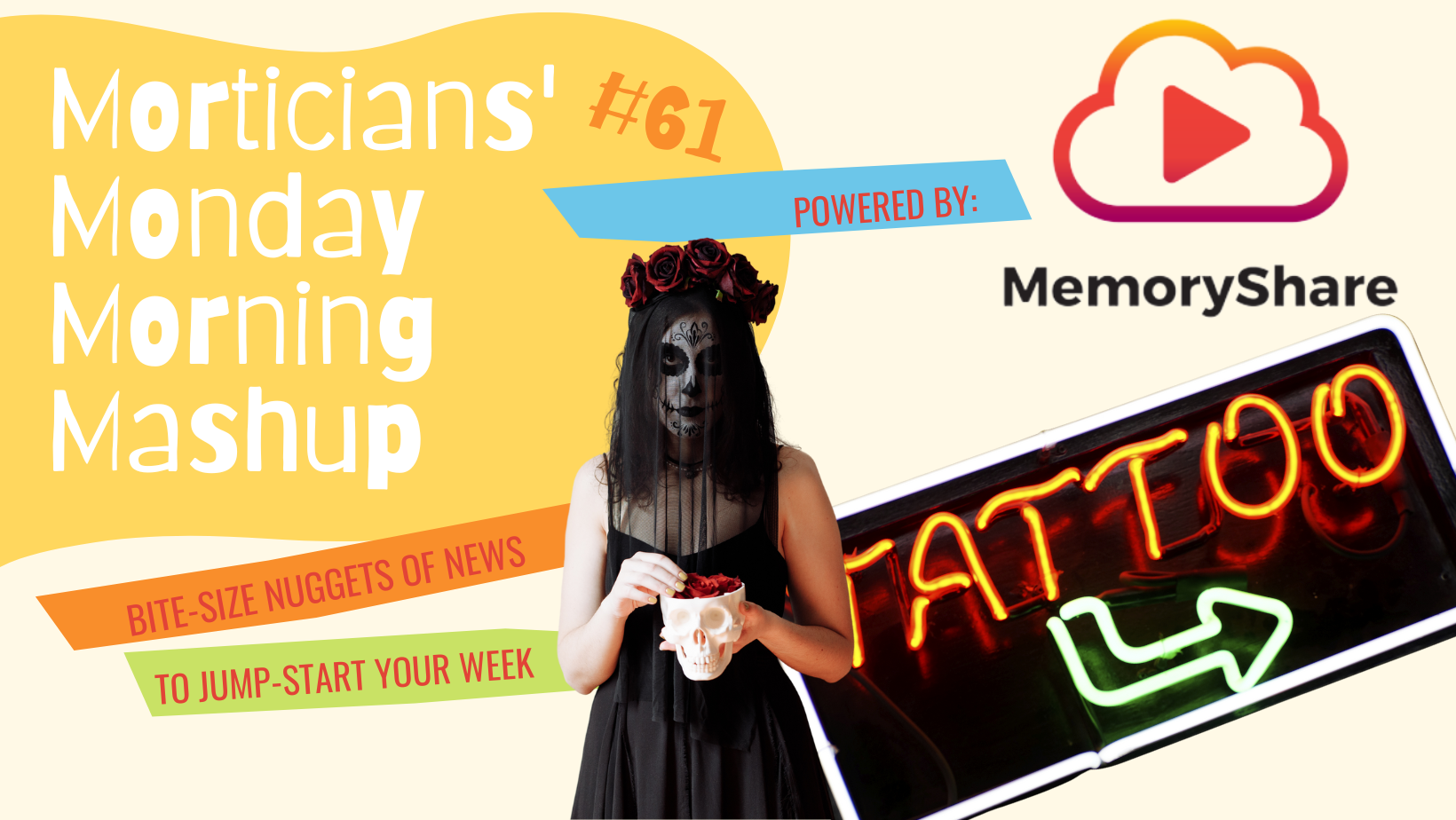 Welcome to the sixty-first edition of Morticians’ Monday Morning Mashup, 4M #61, where we’ll serve up bite-sized, easily-digestible nuggets of the deathcare news you need to crush conversations in the week ahead. Bon appetit!

‘Til death to they part

Talk about being all in on a career … When Axel Nino proposed to his girlfriend Norma, there was little doubt when — or where — their wedding would occur. For Norma, a self-professed “Halloween superfan” and California mortician, the perfect month was October, and the perfect place was — you guessed it — the funeral home where she works. Norma wore a gown with a black lace overlay, arrived in a hearse, decorated with pumpkins and coffins, and professed her vows in the cremation viewing area.

This is not an op-ed column, nor is Connecting Directors an editorial platform, but … some things just need to be said — bluntly. It is never OK for deathcare professionals to share any details about the deceased who have been entrusted to their care. Of course, 99.99% of our readers get that, but here’s a story about that 0.01% who didn’t. Recently, a crematory operator texted her husband a pic of paperwork identifying the young victim of a fatal automobile accident who she was in charge of cremating, apparently just to let him know she was involved in the case, which was a local tragedy. Her husband then posted to social media that his wife was handling the cremation of [insert person’s name here …]. Needless to say, the family was devastated, and the worker was terminated — justifiably. Perhaps the victim’s father said it best: She does not deserve this disrespect in death.

Now on a MUCH more positive note …

Shout out to Hamlar-Curtis Funeral Home & Crematory in Roanoke, Virginia, who offered voters free rides to the polling places on election day last week. President and owner Michael L. Hamlar said, “If someone would like to vote, transportation should not be an issue.”

“Random corpses in Portugal are becoming mummies, and it’s become a real problem”

We couldn’t have written that headline any better! But we’ll give you a moment to let that sink in … So … Here’s what’s behind it. Portugal, like many other countries, is running out of burial space, so cemetery workers depend on bodies eventually disintegrating (ashes to ashes, dust to dust) so the compact remains can be dug up from their temporary graves and reburied in a smaller container to make room for the next burial. The “real problem” that’s occurring is that workers are digging up gravesites only to find that some of the bodies that should be ashes and dust are actually full-size, basically intact mummies. By law, non-decomposed bodies can’t be removed, so they’re reburied and their status is rechecked every two years. A survey found that 55% to 64% of bodies first exhumed from 2006 to 2015 in the cemeteries in Porto, Portugal’s second largest city, were not fully decomposed. Basically, as one brilliant subtitle reads, these bodies are “refusing to rot,” and they don’t yet know why.

No, not the mummies in the previous segment … We’re talking about the ancient mummies that were highlighted in two separate stories last week. First, scientists in Peru studying trophy heads captured in 0 to 450 C.E. found traces of mescaline, one of the main ingredients in the psychedelic ayahuasca. Yes, that’s the same “mind-expanding” drug to which Aaron Rodgers attributed his NFL success. Just look at those pics, though. You can kind of see it, right? Duuuude …

In other news, female Egyptian mummies from 1550 B.C. to 1070 B.C. recovered from the New Kingdom site of Deir el-Medina have been found to have hip and thigh tattoos. Not exactly tramp stamps, but pretty dope, nonetheless.

This op-ed (a legit one, not like the one we vented out earlier) riffs on the November 4 Wall Street Journal article about how deathcare professionals are “putting the fun in funerals.” The article explored all the fabulous and innovative ways you’re making mortality less morbid. WSJ’s research included crashing the NFDA Convention in Baltimore last month and reporting on Gail Rubin’s wonderful “Before I Die” festivals. The article isn’t terrible, though; after all, it IS the Journal. And as the comments on the article show, it was fairly well received. Back to the op-ed, though. This guy manages to be hilarious while at the same time poking sneakily sharp little barbs at deathcare, as in:

Nope, that last one wasn’t funny at all.