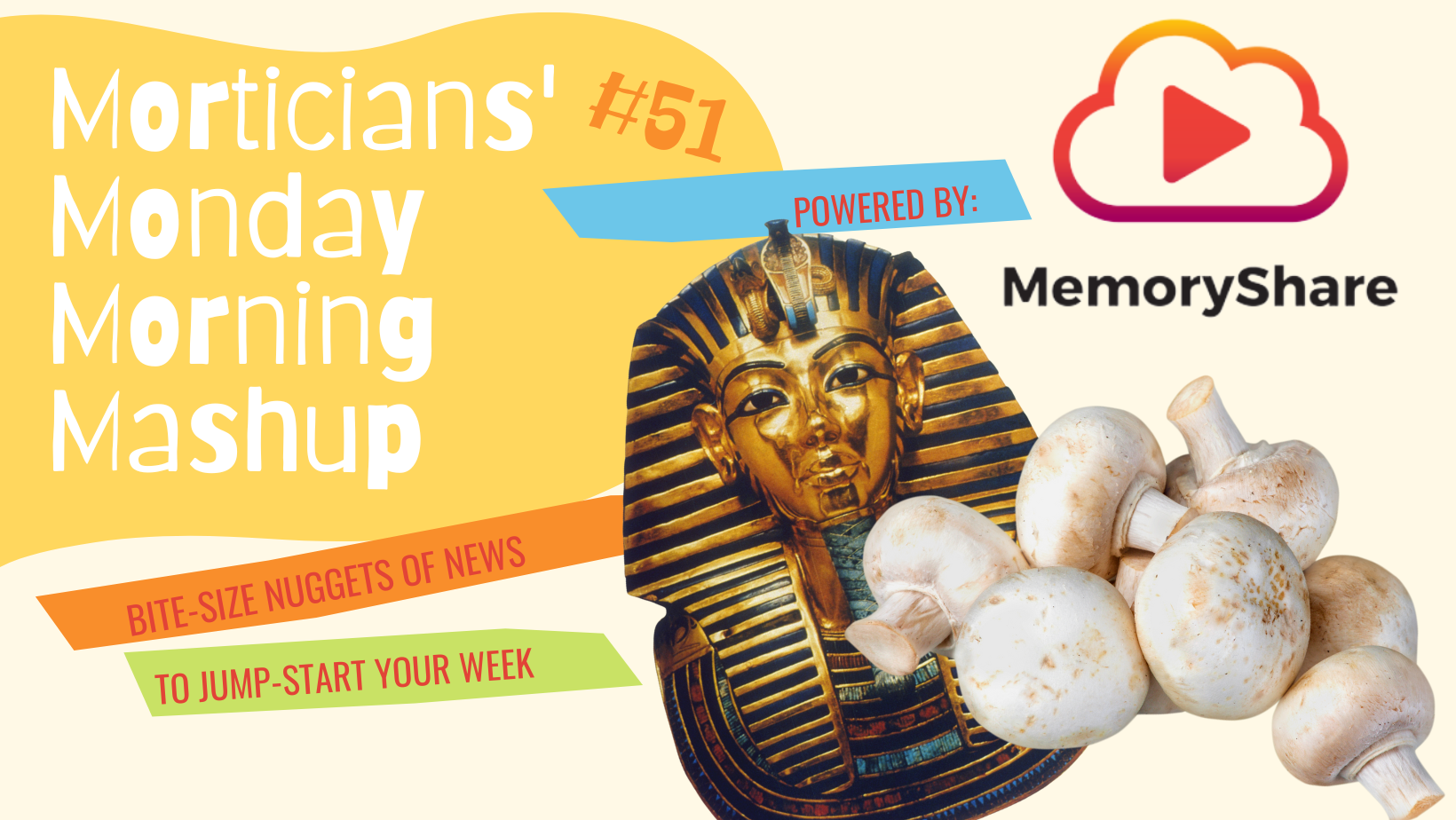 Welcome to the fifty-first edition of Morticians’ Monday Morning Mashup, 4M #51, where we’ll serve up bite-sized, easily-digestible nuggets of the deathcare news you need to crush conversations in the week ahead. Bon appetit!

When hundreds of people died in a cholera outbreak in 1833, residents of the Mexican village of Guanajuato had to bury their relatives quickly to avoid further spread of the disease. Just 40 years later, though, a new tax on cemetery plots forced many of these families to dig up their dead. Remarkably, the area’s unique soil had left the bodies “remarkably preserved” according to one account, so the remains were taken to a warehouse for storage. Word of the mummies spread, and to avoid vandals breaking into the warehouse for a peek, the villagers put the bodies on display — suspended from ropes. Today, the mummies stand behind temperature-controlled glass in an actual museum that still attracts curious tourists. Oh, and that terrible tax was done away with in 1958, so hopefully, there will be no additions to the Mummy Museum.

Taking his cue from the famed mushroom suit, perhaps, a Dutch man has invented a mushroom coffin that decomposes within 45 days. In 2021, Bob Hendriks of Eindhoven in the Netherlands sold his idea to DELA, a Dutch funeral provider cooperative. DELA funded the development of a full-size model and helped Hendriks tweak his design to be more deathcare-friendly; for example, the original design “didn’t allow for the coffin to be carried with dignity.” A DELA representative shared that a number of his clients have requested the mushroom coffin despite its high price.

After a six-year reprieve from deployment, members of one of the U.S. Army’s two active duty mortuary affairs units are being sent to various locations in Southeast Asia this month. Nicknamed the “Sentinel Soldiers,” the unit supported mortuary operations in New York City at the height of the COVID-19 outbreak in 2020. They will now serve a four-million-square-mile area spanning from Egypt to Kazakhstan, locating and identifying bodies in the field, preparing and transporting the deceased, and assisting with arrangements and military burials. Let’s keep these folks in our thoughts and prayers as they set out on their missions.

All about the Benjamins

Following an investigation by the Bereavement Authority of Ontario (BAO) and newspaper coverage of various complaints, Toronto’s largest Jewish funeral home is making changes to become more transparent. Michael Benjamin, managing director of Benjamin’s Park Memorial Chapel, announced that that company is modernizing its website, conducting communication training, and, most importantly, temporarily suspending its practice of “deducting 10% in administration fees to cover the costs of processing charitable memorial donations.” Yes. Apparently, the funeral home established The Benjamin Foundation to hold funds donated in honor of the deceased until families can distribute them. The BAO found that at least one family (which filed a civil suit against Benjamin’s and also complained to the BAO) was not notified of the fee, and has asked Benjamin’s to make the fee more prominent on their price lists and website.

Thanks for nothing, Google Translate

From what we can understand from a New Zealand news outlet, Kaiora and Francis Tipene, the lovable couple who star in the NZ reality show The Casketeers, have decided to take a break from their popular show, which enjoyed five seasons on Netflix. The article says that “despite the Tipene whānau nearing the decision to take a break, their future and ngākau for their mahi is definitely with whānau and tūpāpaku across Aotearoa.” As non-Maori speakers eager to find out why the Tipenes are pausing their show, we plugged this sentence into Google Translate, and got this:

Well, that didn’t help much. After further investigation, we have concluded that the Tipene family is going to spend more time with “extended family and corpses across New Zealand.” OK, so it’s not a perfect translation, but you get the drift.

Coming to a big screen near you …

Great news! Your favorite video game — yes, of course it’s The Mortuary Assistant — is being made into a horror movie! Director and screenplay writer Jeremiah Kipp hopes to “celebrate all of the game that terrified me as well as create a companion piece to it…translating it into the visual storytelling and character-driven horror of narrative filmmaking.” Remember, this is the game we’ve shared with you in previous 4Ms — the one where players take on the role of embalmer and have to hope they don’t run into “unstoppable corpses.” Maybe when the film comes out your team can make some popcorn and host a movie night!

Tut was more just funky … he was loaded

Recently, American author Maria Golia literally wrote the book on tomb raiding — the actual practice of stealing artifacts from graves, not the Indiana Jones adventure. In A Short History of Tomb-Raiding, Golia explains how and why tomb raiders operated as well as how they were punished (slicing off nose, ears, and lips prior to public impalement, etc.). She also puts a modern-day price on the famed coffin of Tutankhamun, which was discovered 100 years ago by Egyptologist Howard Carter. Based on today’s gold prices, Golia estimates the 22-carat coffin to be worth over $6.5 million. So, yes, as Steve Martin and the Toot Uncommons sang in 1978 on SNL, King Tut was funky, was buried in a condo made of stone-a, and was indeed a golden idol — but we’re not sure if he was buried with a donkey, did the monkey, or if the ladies actually loved his style as he was dancin’ on the Nile.