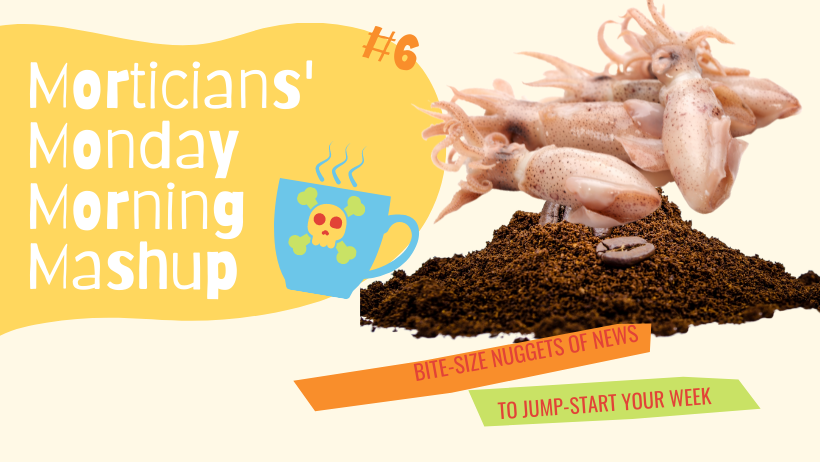 Welcome to the sixth edition of Morticians’ Monday Morning Mashup, where we’ll serve up bite-sized, easily-digestible nuggets of the deathcare news you need to crush conversations in the week ahead. Bon appetit!

We have the NFDA Convention; Spain has Funermostra — and neither event disappointed this year. However, Funermostra had one thing we didn’t see in Nashville: Replicas of the pink-ribbon-wrapped black caskets provided for the indebted losers in Netflix’s Squid Game. As with every. single. aspect. of this streaming phenomenon, aficionados have opinions on why the director picked this odd combo for the caskets, from which we’ll let you choose your favorite:

Yes, a large vessel created to brew coffee is often called an “urn.” But there’s a new “coffee urn” in town, and it’s not waiting to be filled with Starbucks. The Koffie Cinerary Urn was another hit with last week’s Funermostra expo attendees. These ultra-eco-friendly urns are made entirely of used coffee grounds, and are shaped like Stewie Griffin’s head with the two urn pieces secured by a handcrafted leather strap system. Wonder if it comes in a Pumpkin Spice version?

BOLO for This Stolen Fetus Skeleton

The owners of a Chicago-area novelty shop are asking for your help in recovering one of their prized possessions. Adam and Skye Rust recently returned from vacation to find that an articulated skeleton of a 1960s fetus was missing from Woolly Mammoth Antiques and Oddities. “Our whole shop is about confronting your fears, coping with life, looking at death and deciding to live,” Skye Rust said. “It’s our personal ethos of life that we’ve instilled into Woolly Mammoth, and the fetus skeleton couldn’t be a better indicator of that.” If you spot this snatched skeleton, let the Rusts know!

Don’t Run Red Lights if Your Passenger Has Warrants … Duh

Remember Shawnte Hardin? A few weeks ago in 4M #3 we shared that Hardin was being investigated for allegedly running a fake (and illegal) funeral home. Since then, authorities have charged him with 37 charges (including several felonies) related to providing funeral services without a license. Last week, an Ohio trooper pulled over a car for running a red light — and found that the passenger was none other than the much-wanted Hardin. Hardin was arrested and is being held on $250,000 bond.