Medical Cannibalism: When Corpses Were Medicine 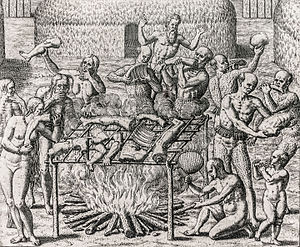 Medical Cannibalism: When Corpses Were Medicine

When we think of eating human flesh, our minds go straight to cannibalistic murderers, horrific life-or-death situations, and ancient ritual sacrifices. But well into the modern era, people all over the world consumed pieces of human bodies for medicinal purposes. Medical cannibalism positioned itself as scientific, placing it in stark contrast to the ritual cannibalism practiced by non-Europeans.

Examples of cannibalism performed for healing purposes, also known as corpse medicine, abound in history. In ancient Rome, people suffering from epilepsy jostled for access to the blood of freshly killed gladiators. They believed it would cure their seizures. The potency of freshly drawn, warm blood resulting from a violent death remained a common thread through corpse medicine for hundreds of years. Into the 18th century, executioners doubled as suppliers for apothecaries, and grave robbers snatched body parts to sell. In an extreme example of filial piety, the children of ailing Chinese parents would cut out pieces of their own thigh or liver in a desperate attempt to heal them.

To medieval Europeans, the dead body held potent mystical qualities that could be isolated and put to use to heal and cure the ailments of the living. According to the sympathetic theory, various diseases could be treated with curatives made from corresponding body parts. Crushed skull for headaches, a bit of powdered dried liver for liver problems, a tincture of blood for blood-related issues. These remedies were in widespread use by the rich and poor alike. A 1679 recipe for blood jam advises using blood of “persons of warm, moist temperament” for best results. Human fat, said to reduce inflammation and pain, also had an important role in early European medicine. In Munich, the city’s executioner delivered human fat to local apothecaries, selling it by the pound.

Before they became embedded in pop culture as a horror fixture, Egyptian mummies were prized by Europeans as a source of medicine. Merchants plundered ancient tombs seeking the life-saving, waxy substance produced by mummified bodies. By the eighteenth century, a lucrative trade in both real and counterfeit mummy powders was flourishing.

Medical cannibalism reached a peak in the late Renaissance. Europeans, of course, viewed their cannibalism as wholly different from the “barbarous” flesh-eating of other cultures. The funerary and ritual cannibalism of many indigenous groups includes eating close relatives or honored elders. In contrast, corpse medicine separates the treatment from the source. Most corpse medicine came from executed criminals, the plundered graves of the poor, dead enemy soldiers, and other marginalized groups. In much the same way as we treat animal meat today, those who engaged in corpse medicine never identified or acknowledged the source material as loved ones or fellow human beings.

Indigenous groups who practice cannibalism, like those of Peru and Brazil, engage in the practice in mourning or as a gesture of respect for elders. However, the Europeans transformed medicinal cannibalism into a quasi-scientific, commercial practice. The medicalization of cannibalism meant the practice became more and more removed from its gruesome source. In stark contrast to the notably social and ritualistic cannibalism practiced by non-Western groups, the English thought nothing of sending the skulls of dead Irish soldiers to Germany for processing into curative powders and tinctures.

Richard Sugg is the author of Mummies, Cannibals and Vampires: The History of Corpse Medicine from the Renaissance to the Victorians. According to Sugg, these bodies were “alienated, in various ways, from ordinary humanity.”

Some characteristics such as youth and virility were particularly prized for their therapeutic effects. However, medieval pharmacists didn’t make any effort to identify, honor, or recognize the humans they harvested. The body became a commodity, with the relationship between the eater and the eaten downplayed as much as possible.

In recent decades, anthropophagy once again gained a mystical significance among some Westerners. Since the late 1960s (and not, as popularly believed, ancient China), some American women engage in placentophagy. They eat their own placenta after giving birth. Despite claims that this practice existed in ancient human cultures and its widespread occurrence in non-human animals, the act has a very short history and doesn’t provide any medical benefits for humans. In fact, because placenta has the potential to be contaminated with opioids, anesthetics, or bacteria, many obstetricians advise against the practice.

Placentophagy aside, using one body to heal another hasn’t entirely disappeared. Thanks to advances in our understanding of human bodies and medicine, it has been refined into demonstrably more effective treatments like organ transplants, skin grafts, and blood transfusions.