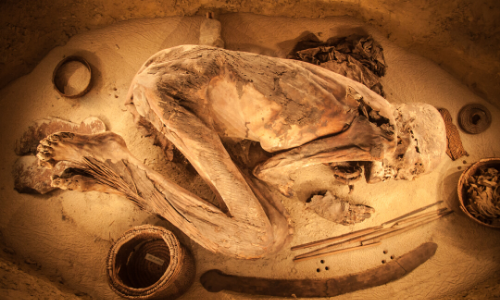 In a discovery that promises to divulge unknown details about ancient Egyptian life, a specialized embalming and mummification chamber found in part of a massive burial complex south of Cairo reveals that it wasn’t just pharaohs and royalty who received elaborate burials. The ancient funeral home shows that Egyptian morticians catered to a wide variety of classes and budgets.

The famously elaborate funerals of ancient Egyptian elites, complete with complicated embalming techniques and extravagant tombs, captured the Western imagination with the renewed interest in Egyptian mummies and rediscoveries made in the early 20th century. Archaeological excavations focused on the burial structures and rituals of pharaohs like the infamous “boy king” Tutankhamen and other royals and priests.

During the 70-day ritual, embalmers followed carefully orchestrated rites and procedures, removing and preserving internal organs, anointing the body with essential oils, and carefully inserting amulets and other symbolic items into the folds of the shroud. The wealthiest in Egyptian society went to great lengths to ensure a comfortable afterlife for themselves, appointing their tombs with as many luxuries as they could afford.

Now, research into a recently unearthed Egyptian “funeral home” shows that ancient morticians provided a wide range of funerary services for all classes of people. Middle-class and working-class Egyptians, having the same strong beliefs in a physical afterlife as the upper class, went to great lengths to ensure a comfortable passage into the afterlife.

Something for all budgets

Archaeologists found the funeral home deep underground in tunnels previously ignored by earlier research. At the bottom of a 40-foot shaft, archaeologists found a large chamber that appears to have been used as an ancient funeral parlor, complete with drainage channels for blood and fluids, ventilation, and an “industrial-strength” incense burner.

Although the most impressive burial rites and grave goods come from royal tombs, this new evidence shows that ancient Egyptians of all economic classes made extensive arrangements for their burial.

The elite buried their own in heavily decorated stone sarcophagi, adorned with gold and expensive jewels. Their tombs were filled with all the tools and accessories they’d need in the afterlife. For the less wealthy, enterprising funeral directors offered cheaper options.

Can’t afford gold? No problem — you can opt for a plaster mask gilded with gold foil. Don’t have the budget for an impressive stone sarcophagus? The funeral home has you covered with a wooden alternative. According to documents from the era and the new findings in Saqqara, ancient funeral directors offered a variety of materials and price points for caskets, canopic jars, masks, shrouds, and other burial accessories. Ancient Egyptian funeral directors, then, were shrewd businessmen, catering to all rungs of society, not just specialized servants of the royals.

In addition to professional embalmers, ancient Egypt also had a class of priests tasked with caring for the dead. Families often paid maintenance fees so the priests would continue caring for the tombs of their loved ones, much like today’s perpetual care fees.

The life and death of an everyday Egyptian

Until now, physical evidence of the embalming process had been scarce. Although we know much about the process of mummification from artistic depictions and ancient documents, the embalming chamber in Saqqara yields the first archaeological evidence of the burial process. The complex provides insight into the burials of middle-class and poor ancient Egyptians, helping to create a comprehensive portrait of the civilization.

Along with the mummification workshop, two 2,500-year-old tombs recently excavated at Saqqara, belonging to middle-class families, also shed light on the lives and deaths of everyday Egyptians. Although the tombs bear no names, they provide useful information to help archaeologists understand how different classes lived and died by examining the materials and intricacy of their casket and the grave goods they included.

The Mummification Workshop Complex, the only intact workshop of its kind, offers valuable insight into the practices of Egypt’s embalmers. Researchers will continue excavating the site to uncover more about the lives of Egypt’s death workers and their diverse clientele.