Dozens Of Clergy Hope To Get People Talking About Death 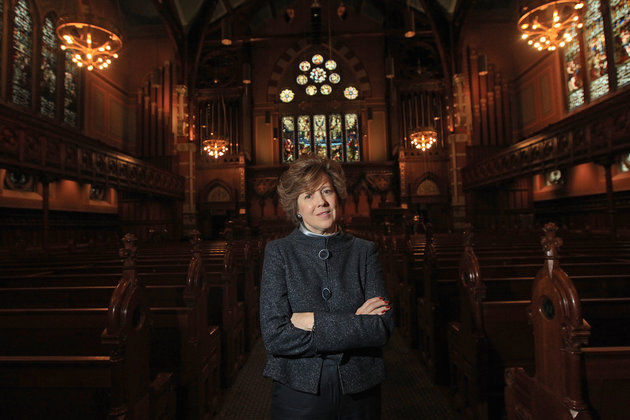 Dozens Of Clergy Hope To Get People Talking About Death

Ninety percent of Americans believe it’s important to talk about the end of life with loved ones. Just 30 percent have done it.

During a recent Sunday service, the Rev. Nancy Taylor, who ministers at the historic Old South Church in Boston, startled her congregation with an unusual sermon.

Taylor pointed toward the pews, telling people that they were going to die. She called out younger and older congregants by name, saying that they, like herself and everyone else in the room, would one day stop breathing.

It wasn’t meant to be morbid or depressing. Rather, it was meant to help the people in the room face a fact of life that everyone has to consider sooner or later. The churchgoers, Taylor said, needed to think about what mortality meant to them — and to their loved ones.

People needed to talk about “how to live until we die… how to live into our dying… how to embrace the inexorable but too often unspeakable: death,” the United Church of Christ minister told The Huffington Post.

For a 10-day period beginning Nov. 6, the Old South Church is one of more than 30 Christian, Jewish and Buddhist communities in Boston and a handful more across the country that will observe the Conversation Sabbath, an occasion for communities of faith to have honest discussions about mortality, grief and the end of life.

“Through a series of sermons, forums and roundtable discussions and an all-church book read, we intend to cradle our congregation in conversations — and maybe even bathe them in lullabies — about this most tender topic,” Taylor said.

Her church, like many others, has already started talking about death during Bible study sessions and small group discussions, and plans to continue indefinitely.

Chaplains, pastors, rabbis and community groups from places as diverse as Bend, Oregon; Reno, Nevada; Springfield, Massachusetts; and Marquette, Michigan, have signed up for the Conversation Sabbath, spurred by a national campaign from a Boston-based nonprofit called The Conversation Project that aims to encourage discussions on the end of life among friends and families.

“We know that dying is not just a medical experience — it’s a human experience. And a deep part of our humanity is our spiritual life, the way we think about our place in the world, our faith, our religious traditions,” said Ellen Goodman, a Pulitzer Prize-winning journalist who founded the organization nearly three years ago. “Yet clergy haven’t always been comfortable talking about how we want to live at the end of our lives, the care we want and the care we don’t want.”

Now clergy are “stepping up to the plate or to the pulpit to begin welcoming their congregations to one of the most intimate and important dialogues about life and death,” said Goodman, who became interested in encouraging conversations around death about nine years ago as her mother was dying. At the time, Goodman realized she had talked to her mother about nearly everything except her wishes at the end of life.

It wasn’t out of the ordinary. A survey from The Conversation Project discovered that 90 percent of Americans believe it’s important to talk about the end of life with the people they love — but that just 30 percent have actually done so. A recentPew Research Center survey found that more than a quarter of American adults have rarely or never thought about how they want doctors to handle their care when they are dying. At the same time, many Americans told researchers that death had already been an important part of their lives. About half the respondents said to Pew that they had a friend or relative who had a terminal illness or who had been in a coma within the past five years.

Organizers of the Conversation Sabbath want to spur those conversations — ahead of time — in the religious communities to which people often turn in times of need.

“We say we live in a culture where we don’t want to talk about dying. But I’ve found if you give people a safe opportunity and space to have a discussion, they will,” said the Rev. Rosemary Lloyd, a retired Unitarian Universalist minister from Boston and the faith-based community adviser for The Conversation Project. Lloyd has spent months attending religious services across Boston to spread the word about the Conversation Sabbath and to facilitate small-group discussions on dying. She’s shared a 12-page, fill-in-the-blanks “Conversation Starter Kit” with several houses of worship.

At St. Charles Health System, a series of hospitals and medical providers in central Oregon, Scott Johnson is a chaplain who splits his time between palliative care and the system’s cancer center. He’s using the kit and the Conversation Sabbath to get spiritual leaders more involved in conversations about the death that he regularly sees in the course of his job.

“Do we really have the courage to talk about living as well as dying? That’s the biggest challenge,” said Johnson, who recently convened a luncheon of Mormon, Buddhist, Jewish and mainline Protestant congregations to launch the Conversation Sabbath in Bend. “We’re hoping the faith communities will have these conversations in partnership with us and that it [will] trickle down to become something natural for everyone.”

At Temple Israel in Boston, a Reform congregation made up of 1,450 families, Rabbi Ronne Friedman is taking a similar approach. “One of the ways we overcome the negatives in our lives is being able to speak about them,” said Friedman, who ministers to a congregation where about 20 percent of the members are over age 75. “We all have stories to tell, and if some of those stories are not permitted in [the] open air, it makes it a lot more difficult to overcome fears.”

Friedman’s congregation plans to print Conversation Starter Kits for the synagogue. He said he’s hoping to “spread an openness to talk about ideas.”

“We have a tradition that exists among many religious traditions of encouraging a deathbed confession,” said Friedman. “My liberal interpretation of that is not so much confession of all the things you have done, but rather an opportunity to share last words of love with your family. The ability to celebrate life in that kind of way is something that is incredibly sustaining and liberating.”

Photo 2: GARY LANGLEY – The Rev. Rosemary Lloyd is the faith-based community adviser for The Conversation Project.