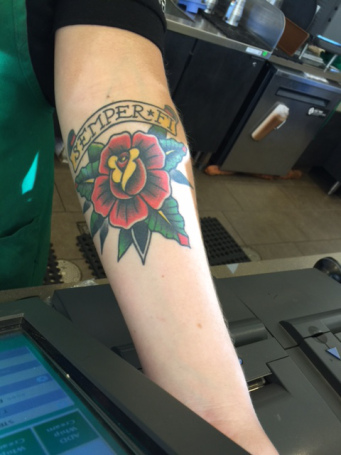 A few weeks ago I made my trek cross-country from Virginia to Arizona to start a new position with The Foresight Companies.  In the back of a 10×10 U-Haul was enough furniture to fill a one-bedroom apartment, my clothes along with living essentials.  My wife proclaimed that if I ever decided to leave her, the truck held everything I would have.  A single day of unloading, unpacking and sorting placed me into my new digs. By early evening I was pretty much set up – even pictures hung.

The next morning, I had to go grocery shopping so I made a list to avoid wandering aimlessly in the aisles wondering what I should buy.  Because of an early morning AO (area of operations) re-con, I knew of a nearly new grocery store about a mile away.  Upon arriving, and since I had no coffee, I found the convenient Starbucks just inside the front entrance.

It was early morning as I had yet to adjust to the Mountain Time zone.  The coffee shop was empty of patrons and I was greeted by a young, smiling gal asking what she may provide for me.  As I gave her my order, I noticed on her right forearm was an unusual tattoo – a banner with Semper Fi atop a flower.  This ink caught my eye because I wondered if she was a Vet; not many Marine Corps tats are adorned with a flower.

So I inquire of her, “Are you a former Marine?”  She answered, “No, but my brother was.”  I asked where and when he served and she told only a few years…and then shared that he was killed in a helicopter crash in Afghanistan.  Tears shot out of my eyes.  I asked her to please tell me about him.

Courtney told me that Justin was killed in a helicopter crash along with several other Marines during Iraq Freedom.  She went on to share that she honors his service and, as a daily reminder of him, got the tattoo.  For those that know me well, there are some subjects that I become emotional over and cannot hold back tears; young people dying for our Country is one of them.

As she made my coffee we chatted a bit and I told her I’m new to town.  Courtney told me where important things were located like shopping areas, good local eats and such.  As she handed me the coffee, she too had tears in her eyes, making mine flow again.  I thanked her for sharing Justin with me, his sacrifice for our freedom, and her kindness to an old sobbing Vet.  I asked Courtney if I could share her story, and she agreed.

I wanted to share this story for a few reasons.  First, pay attention and engage people because everyone has a story.  Second, “those people” with ink have depth (I’m tatted myself).  Finally, God has a way to let you know you are in the right place.  I would have never known about Justin’s sacrifice for our freedom if I had not traveled all the way across our fantastic country, eventually finding myself simply in need of coffee and groceries that first early morning. I’m grateful that Courtney is my barista and friend.

In Memory of Captain Chris Cash.  He gave the ultimate sacrifice June 24, 2004 in Baqubah Iraq. RIP my fellow NCMA Alum.

For all those that gave the ultimate sacrifice, thank you.  For the rest of us, please take a moment to be grateful.  Our freedom did not come for free.  Happy Memorial Day.