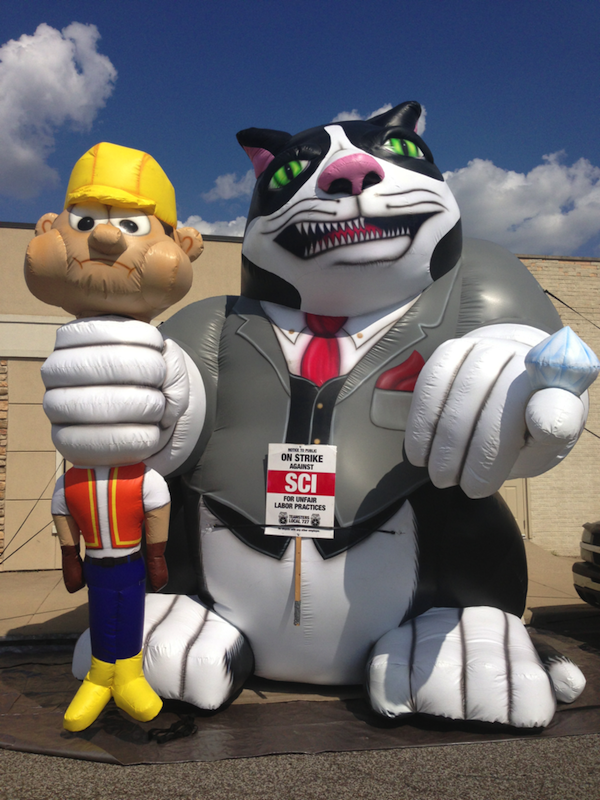 The inflatable, ten-foot-tall feline was placed at Blake-Lamb Funeral Home at 103rd Street and Cicero Avenue, where funeral home employees are embroiled in a labor dispute with Service Corporation International.

Employees from 16 Chicago-area funeral homes walked off the job on July 2 after failing to reach an agreement on a new contract for funeral directors, drivers and embalmers.

In the final hour of last ditch contract negotiations, a union bargaining team made an offer to Dignity containing lower wage increases than they were offering so union members could maintain their pension and health benefits.

The company has brought in out-of-state funeral directors to continue the work at the striking Chicago-area funeral homes.

Whether SCI remains willing to continue contract negotiations remains to be seen. According to the Teamsters, a picketing funeral director in Skokie said he received an email from a Dignity recruiter, offering him an opportunity, that read:

“We are contacting you for a potential opportunity on a temporary basis due to a strike in progress at some funeral homes owned and operated by SCI Illinois Services, Inc. These temporary assignments could lead to permanent positions based on the outcome of the strike and your performance; a permanent opportunity is not guaranteed.
Requirements:

If you fit the requirements and are interested, please contact me for immediate consideration.
Thank you, Amber Kennedy
SCI-Service Corporation International
Recruiter”

John T. Coli, secretary-treasurer of Teamsters Local 727, said in a news release that the strike has had an impact on the number of funerals performed at the affected, Dignity funeral homes.

“SCI’s contingent of out-of-state funeral directors must not be working,” Coli said in a Teamsters news release. “From what we understand, the few funerals Dignity has performed have left families dissatisfied.”

Three funeral services are scheduled at Blake-Lamb this week, where its striking community-based employees are pacing the picket line.

The Teamsters have established a website (www.integrityinillinois.com) and hotline (312-206-4123) directing families to community-friendly, independently owned funeral homes not affected by the strike.

A company spokeswoman for SCI said there is no news to report from their end.

“The company remains focused on providing continued, high-quality service to families during the strike.”