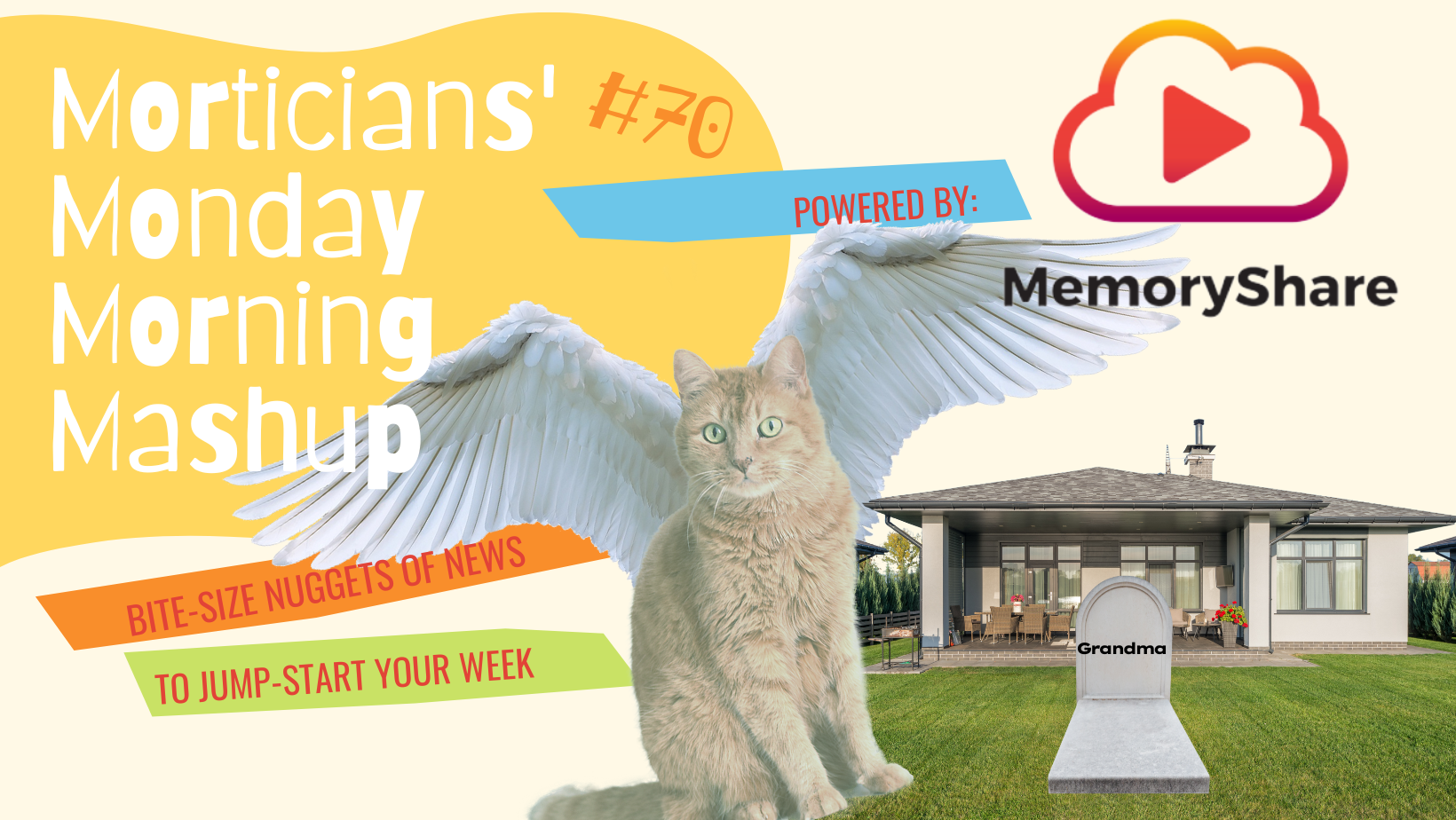 Welcome to the seventieth edition of Morticians’ Monday Morning Mashup, 4M #70, where we’ll serve up bite-sized, easily-digestible nuggets of the deathcare news you need to crush conversations in the week ahead. Bon appetit!

She was an old American

Last week the United States lost its oldest citizen when Iowa’s Bessie Laurena Hendricks died at age 115. Bessie was born in November 1907 in the same town in which she died. A teacher in a one-room schoolhouse, Bessie eventually married and had five children. Her husband died in 1995 just after the couple’s 65th wedding anniversary. With Bessie’s passing, the title of America’s oldest citizen has been passed to California’s Edie Ceccarelli, who turns 115 on Feb. 5.

A family in California has filed a police report claiming an “artist” they found on TikTok is holding the cremated remains of a loved one hostage for $3,000. The seller was supposed to create some sort of jewelry from the cremains, for which the family prepaid, but instead the seller demanded more money — or else, they would not return the ashes. A local news station says the victims are sharing their story “to keep ‘anyone else from falling prey to the same heartless crime.’” Perhaps it’s also a good lesson for deathcare professionals to share with families who mention purchasing memorial jewelry from a TikToker.

What’s next, lions and tigers?

Over the past year we’ve documented stories about the various non-human uninvited guests that roam cemeteries, including wild hogs, coyotes, and scary stray dogs. Some are harmless and happily coexist with visitors while others become nuisances that require fences and traps. One Malaysian cemetery, though, is having issues with a wild animal that takes these concerns to a whole different level. In late December, a grieving husband visited the grave of his recently-deceased wife only to find that her body had been dug up and dragged away by a wild bear that was roaming the grounds. Luckily for North American cemeterians, the small but aggressive sun bear, which this one is thought to be, is found only in Southeast Asia and usually lives in tropical forests.

Now for some deathcare drama happening in the Memphis rap scene. Rapper Big Scarr died in December at age 22. So first, his family was super sketchy about the date of his $60,000 funeral, posting on social media that they paid $15,000 for his casket. Next, rapper Gucci Mane and his wife shared that each had given the family $10,000 to go toward funeral expenses, but Big Scarr’s sister said that $20,000 would only cover “obituaries and flowers.” Big Scarr’s friend, Quezz Ruthless, says Mane promised to pay the whole bill and Mane’s wife has posted they haven’t received a thank you from the family for anything. But BankRoll Tink posted a video of Big Scarr’s father telling Gucci Mane that they were cool and he didn’t expect Mane to pay anything else. At the same time, folks are slamming Quezz for filming a music video during Scarr’s January 9 funeral services, and Scarr’s girlfriend is accusing Scarr’s family of “clout chasing” for wearing his chains on the Gram. Here’s hoping that all parties can put this behind them and let Big Scarr (a.k.a. Alexander Woods) rest in peace — and that the funeral home actually gets paid, one way or another.

A new selection in the pet afterlife book club

In case you’re interested in a book that addresses grief and loss through a different lens, this new release might be for you. Here’s the blurb from last week’s press release:

“Best-selling and award-winning author and pet medium Rob Gutro’s tenth book, “Pets and the Afterlife 4: Messages from Spirit Cats,” published on January 10, 2023. This fourth volume in pet medium Rob’s “Pets and the Afterlife series” of books focuses solely on communications from cats in the afterlife. Readers will learn how cats communicate from spirit and learn about the many signs you can look for from their own cats. In addition, there is a special chapter by a licensed professional on how to cope with loss and grief. Through personal stories, pet parents relate how their cats in spirit gave them signs and messages either directly or through Rob’s communications.”

We buried Mom under the swing set

A new bill that’s up for consideration by house representatives in Washington state could legalize human burials on private property … including backyards. HB 1037 proposes amending an existing law to allow for “family burial grounds” in properties that are wholly owned by “natural persons” and not legal entities. The bill specifies that property owners opting to bury their loved ones in their family cemetery cannot sell lots to others and cannot charge any fees; they’re also responsible for recording the details of the deceased and the plot,, including GPS coordinates, to the county auditor within 30 days. Local planning commissions would be the ultimate regulators of the grounds if the legislation passes.