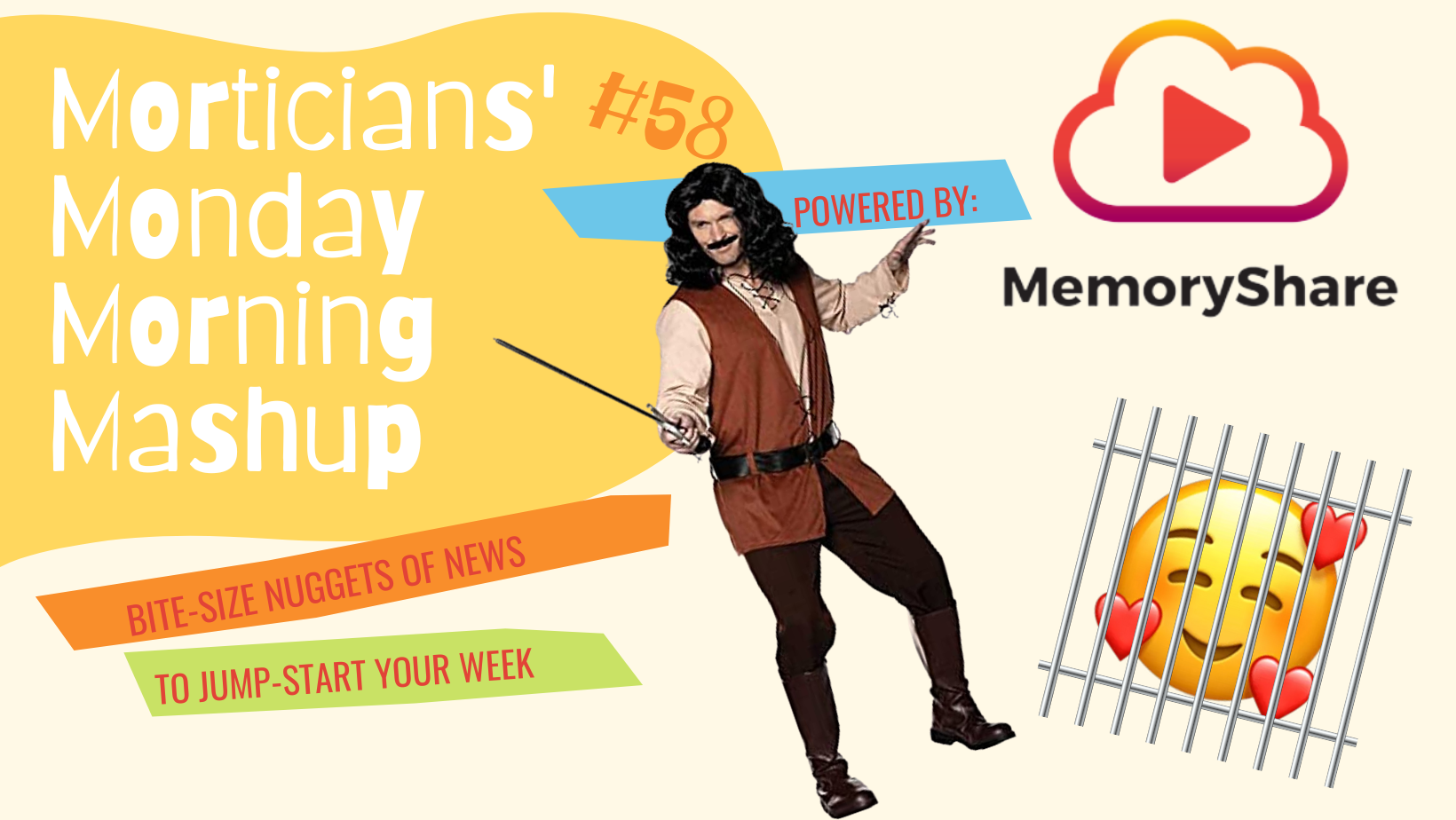 Welcome to the fifty-eighth edition of Morticians’ Monday Morning Mashup, 4M #58, where we’ll serve up bite-sized, easily-digestible nuggets of the deathcare news you need to crush conversations in the week ahead. Bon appetit!

If you’re searching for a side gig, reality television might just be the ticket. First there was Phaedra Parks, a licensed funeral director and attorney, who joined the cast of Real Housewives of Atlanta and made a few waves when she bragged on the Today Show about her mortuary being “jam-packed” during COVID. Now another funeral director is getting real on WeTV’s reality show Love Behind Lockup, which follows romantic relationships between current prison inmates and their “baes” on the outside. Tai Simpson, who reportedly works at a funeral home in Buffalo, New York, has been matched with several prisoners, including Reo, a.k.a. “Hottie,” who is apparently also dating a woman named Boston. In February, the feud between Tai and Boston over their mutual “prison boo” Hottie boiled over, and Tai asked Boston to “meet on her turf where she’s in charge. So, she tells her rival to come to the funeral home where she works as a mortician,” hoping the location “will scare” Boston. Geez. Sometimes it’s probably not best not to mix work and play …

… Nor should we mix deathcare and politics, especially when you’re promoting something as controversial as Communism. Last week, China’s Tianjin No. 1 Funeral Home posted the message,“Welcome to the 20th National Congress of the CCP and share a new future of the funeral service together,” on WeChat. Critics interpreted the slogan as attributing the success of the Chinese funeral industry to the rise in the number of deaths (and thus increased volume for the funeral homes) due to violent acts and rebellions related to the Chinese Communist Party. Thankfully, the funeral home removed its message soon after the backlash.

A new National Geographic documentary-style series starring Chris Hemsworth (a.k.a. Thor) is coming to our screen in November and deathcare professionals have the perfect excuse to watch. In the upcoming series Limitless, Hemsworth travels around the world to test the “boundaries of human potential.” Along the way, he consults with a variety of experts to “learn the limits of the human body, while also discovering the best way to improve health and live a better, stronger and longer life.” (We want this for you, too, Chris Hemsworth). One of these experts is Alua Arthur, death doula and founder of Going with Grace. On her Facebook page, Arthur comments that she spoke with Hemsworth about “mortality and death” and thanked him for his “trust and vulnerability.”

Drop it in the lost and found box

In what we can only hope was meant to be an incomplete tribute to a deceased golf lover, someone abandoned a set of cremains — urn included — at a Missouri golf course in August. Authorities sent the urn to a local crematory for identification, but they had no luck. The urn is now in the custody of the St. Louis Metropolitan Police Department, although they are still appealing to the public for information.

Arizona Cardinals defensive lineman J.J. Watt may not have a perfectly healthy heart (he went into atrial fibrillation in early October) but there’s no doubt he has a kind and generous one. He’s raised more than $41 million for Texans hit by 2017’s Hurricane Harvey and started a foundation to fund athletic programs for middle schools. But not all of his charitable acts are on such a large scale. In June, Watt saw a tweet by Texas teacher Jennifer Simpson saying she was selling her J.J. Watt jersey and sneakers to pay for her grandfather’s $18,000 (?!) funeral. Immediately, Watt tweeted Simpson back, telling her not to sell these items, and that he’d like to help. At first, Simpson thought the tweet was a sick scam, but, sure enough, funds directly from Justin J. Watt (not his agent or foundation) hit her Paypal account.