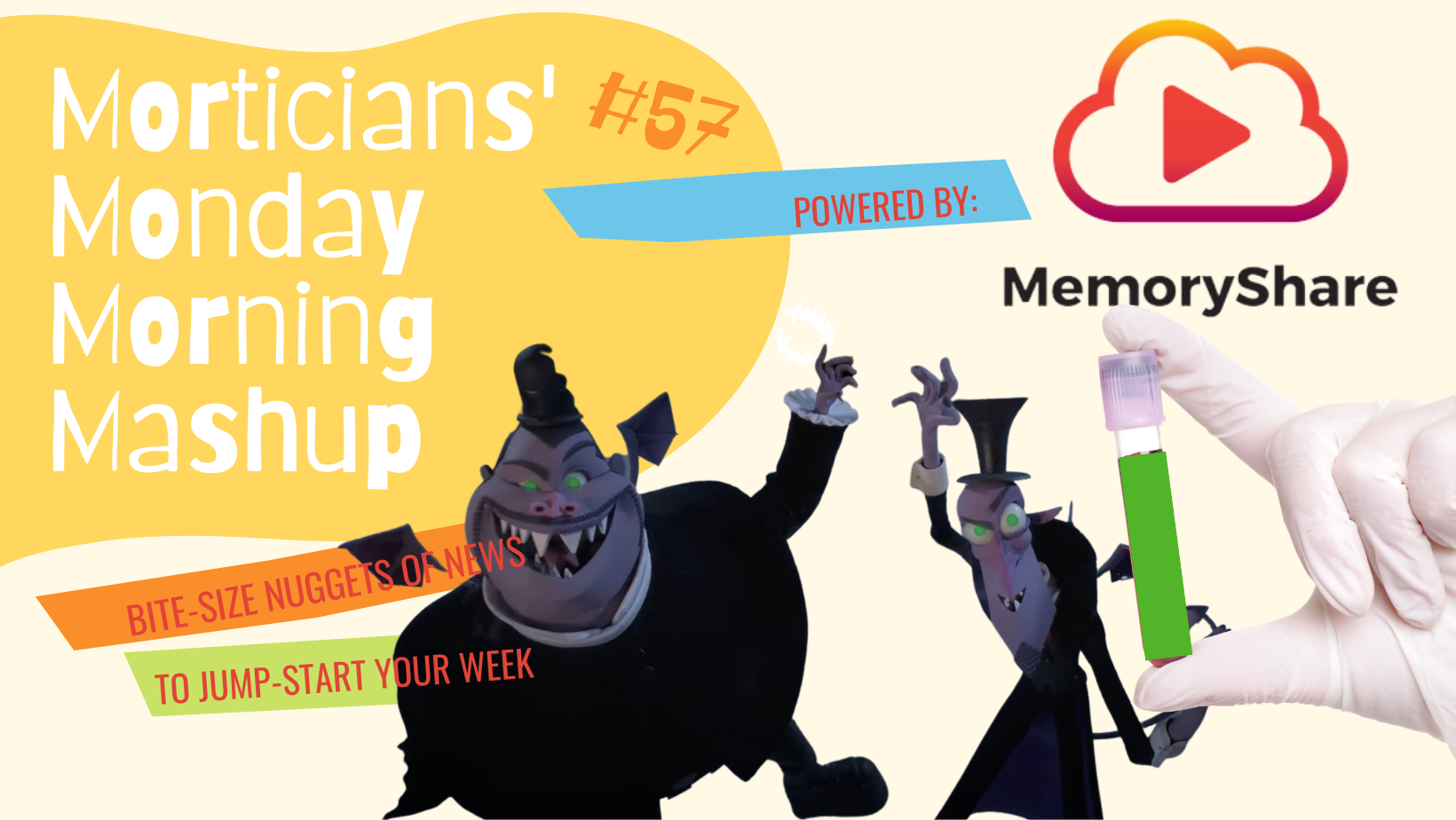 Welcome to the fifty-seventh edition of Morticians’ Monday Morning Mashup, 4M #57, where we’ll serve up bite-sized, easily-digestible nuggets of the deathcare news you need to crush conversations in the week ahead. Bon appetit!

Funeral Rule back on the FTC agenda

In case you missed it while you were traveling home from Baltimore last week, the Federal Trade Commission announced that the Funeral Rule will be one of three items on the agenda for an online, open meeting to be held on October 20 at 1 p.m. ET.  According to the FTC’s release, the Commission “will vote on whether to retain the Funeral Industry Practices Rule and issue an Advance Notice of Proposed Rulemaking seeking comment on potential updates to modernize the rule, including improvements to the public accessibility of funeral home price information. The Commission will also vote on issuing a staff report that summarizes the results of their review of almost 200 funeral provider websites.” The NFDA is coordinating a “unified response to ensure that the funeral service profession’s voice is heard loud and clear.” You can read more about the issues in the NFDA’s comprehensive release here.

Sadly, legendary rapper Coolio has entered into the eternal Gangsta’s Paradise, dying of a suspected cardiac arrest on September 28 at age 59. Coolio left behind 10 children, all of whom, it was recently announced, will receive necklaces with pendants containing some of their father’s cremains. The children will be able to pick “customized inscriptions” for their piece. Once distributed, the remains of the cremains will be placed in an urn.

Last week a UK outlet wrote about a former funeral home (with attached chapel and cemetery) being converted into a short-term vacation rental. Yes, for around $220 a night, you too could stay in a 17th century cottage complete with a row of original embalming tables in the kitchen, a “family set” of coffins on the wall, and, of course, plenty of spooky sounds and stories.

There’s no doubt you guys have some great stories to tell about the odd things that happen in deathcare. You may not have realized, though, how many people want to hear them. In the last two weeks (just in time for Halloween, no doubt), two articles have popped up, each featuring funeral directors’ confessions of creepy events and “wild conversations”:

TL;DR? Well, here are some highlights:

Remember the Key & Peele sketch comedy show that ran on Comedy Central from 2012 to 2015? “A-A-Ron”? “Jay – Quellin?” Well, Keegan-Michael Key and Jordan Peele have reunited for a stop-motion horror-comedy movie, Wendell & Wild, about two demon brothers who live in the underworld and call themselves the “Magician Morticians.” The trailer promises “nuns, demons, murder, some children, a goat, and a dead priest.” Watch for Wendell & Wild in theaters and on Netflix on October 21!

Eternal Rest Funeral Home in Bayou La Batre (pronounced “bi YOO luh BOT tree”), Alabama recently provided $2,000 in $20 gas vouchers for distribution by area churches to those in need. The funeral home partnered with a local grocery station/gas station to provide the giveaway. It’s a promotion with no strings, little effort, and great personal rewards for everyone involved. Kudos to Carlton Malone and all the folks at Eternal Rest!