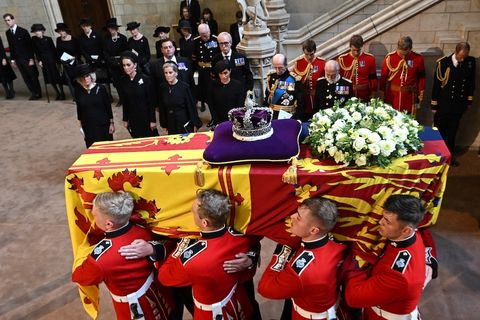 For 11 somber days, the world watched as the United Kingdom prepared to bury its Queen. From September 8, 2022 — the day Queen Elizabeth II died — until she was laid to rest on September 19, every step of the process was televised and scrutinized, and the public was fascinated. Amid the pomp and circumstance, though, were details that could be especially appreciated by deathcare professionals, not the least of which was the Queen’s coffin. Far from an off-the-shelf model, the Queen’s coffin is a story within itself.

Q. What material was the coffin made from?

A. Oak. More specifically, English oak from trees on the royal family’s Sandringham Estate following royal tradition. Of the 20,000 acres that comprise the estate, just under 3,500 acres are dedicated to woodlands of softwood and hardwood trees. Although there is a sawmill on the property where fencing rails and firewood are produced, the Queen’s coffin wouldn’t have been crafted there. Instead, construction of the coffin was entrusted to the specialist firm Henry Smith more than 30 years ago. Unfortunately, the records of the exact date of construction and origin of its materials were lost when the Smith firm was acquired by another firm in 2005.

Q. Where has the coffin been for the last 30 years?

A. Since the Queen’s coffin was custom-built in the late 1980s, it has been in storage. It was first cared for by J.H. Kenyon, Ltd., the firm that handled Queen Elizabeth’s father’s funeral in 1952. In 1991, the coffin was transferred to Leverton and Sons of London, who became the royal undertakers that same year.

Q. Are there any adornments on the coffin?

A. The Queen’s coffin is complete with unique brass handles crafted by a Birmingham, England company especially for royal coffins. The Levertons replaced the original brass handles after the coffin had been in storage for decades. Also, the lid of the coffin was “specifically designed to hold precious fitments” while the Queen’s body lay in state at the funeral, Andrew Leverton told news outlets. These objects included the Imperial State Crown, orb and sceptre, representing different aspects of the sovereign’s powers.

Q. Is the coffin really lined in lead?

A. Yes. The inner lining of Queen Elizabeth’s coffin is made from lead, a practice that dates back hundreds of years in the royal family. The first royal to be buried in a lead-lined coffin is believed to be Elizabeth I, who died in 1603. In the centuries before modern preservation practices, lead would “help the bodies of deceased monarchs remain pristine,” explains The Washington Post, because it doesn’t decay. The lead lining is so airtight that moisture can’t get in and smells and gasses cannot escape, which is especially important since the coffin will be interred above ground. The lead adds so much weight to the coffin (approximately a quarter of a ton) that eight pallbearers are required rather than the usual six.

Q. Were any royal jewels buried in the coffin with the Queen?

A. Yes. According to the National Diamond Council, Queen Elizabeth was buried with her Welsh gold wedding band (engraved with a secret message from her late husband, Prince Philip); a pair of pearl earrings gifted to Elizabeth by her grandmother Queen Mary; a pearl necklace from her father King George IV, to which she added pearls throughout the years; and the “wand of office,” a thin wand used by the lord chamberlain to tap people who were being loud or disrespectful in the monarch’s court. The wand was broken in two before being placed in the coffin with the Queen.