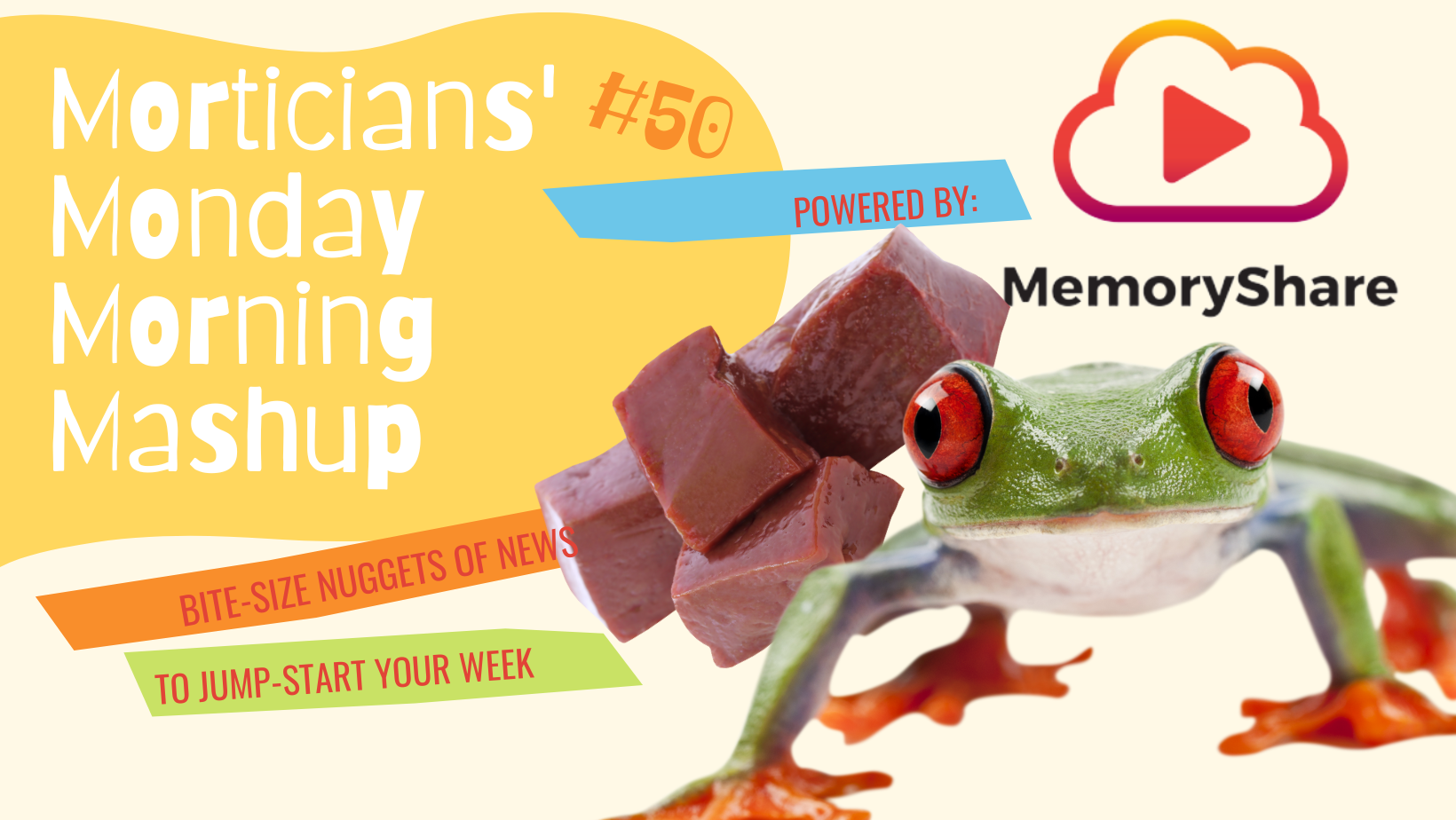 Welcome to the fiftieth (!) edition of Morticians’ Monday Morning Mashup, 4M #50, where we’ll serve up bite-sized, easily-digestible nuggets of the deathcare news you need to crush conversations in the week ahead. Bon appetit!

Police in Calaveras County, California (yes, the place with the Celebrated Jumping Frog) recently attempted to notify a father of his son’s death. They found the father sitting up in a chair … where he had been sitting, deceased, naked, and mummified, for at least three years. According to authorities, Randall Freer had most likely not reported the death of his father Ada Freer so that Randall could continue receiving Ada’s Social Security checks. Apparently, Ada last signed a check in 2016, leading officials to believe that he could have been dead as long as six years. Had the younger Freer not died, there’s no telling how long his father would have kept his seat at the table.

No one loves admitting they’ve made a mistake, and they definitely wouldn’t appreciate someone listing those errors in a national news publication. Last week, a UK outlet published a list of 100 “body blunders” which “Britain’s mortuaries have admitted” they made over the span of one year. They include:

To be clear, these incidents are all related to hospital morgues, not funeral homes. Still, though … it seems that all 100 of these errors would “undermine public confidence” — not just the last one.

Too soon, son. Too soon.

Last week several outlets posted a story about funeral homes refusing to take the body of the Uvalde mass shooter into their care. We’re not going to give the shooter the dignity of naming him, as any and all attention should be paid to his victims and their loved ones. However, it seems that even his family couldn’t decide who should be responsible for him, and his body was reportedly held in the coroner’s morgue for more than three weeks while they sorted out their differences. The shooter’s remains were eventually cremated in a “nondescript building” 80 miles away from the scene of his horrific crimes.

Certainly, funeral homes have the right to refuse service to any family, and we can imagine that this person’s actions would provide more than enough reasons to pass on this call. However, we have to applaud one of the two funeral homes in the town of Uvalde who not only provided services free-of-charge for the victims, but also made the following perfectly-worded statement about not handling the shooter’s disposal:

“All of our staff grew up in Uvalde County and attended school in Uvalde County and believe that everyone deserves a dignified and respectful funeral service,” Taylor Michelle Massey of Rushing-Estes-Knowles Funeral Home told a Houston paper. “However, in the weeks following the shootings of May 24th, we were caring for 17 families … through what is probably the most difficult time in their lives. Under the circumstances, we did not feel it would be appropriate or in the best interest of the families for which we were caring to take custody of the remains of the individual that caused their pain.”

You can truly find pretty much anything on the internet, but knowing how to properly type in what you’re searching for certainly makes the process less frustrating. When we heard about a New Zealand man who created a casket shaped like a cream doughnut for his deceased friend, we wanted to know more. Come to find out, when you type the words doughnut and casket into the Google search bar without the benefit of search-narrowing quotation marks, you get all sorts of interesting results, including a doughnut-filled casket from Voodoo Doughnuts …

… AND the originally searched-for doughnut-shaped casket:

Hope he had shipping insurance

A “private American customer” was probably disappointed this month when an item he ordered from a “European dealer” was seized before it could be delivered. Unfortunately, what the seller had described on his shipping manifest as an “antique stone sculpture over 100 years old” was actually a 3,000-year-old Egyptian archaeological artifact once dedicated to the funerary god Imsety. U.S. Customs officials intercepted the artifact in Memphis because the item — the “lid of a canopic jar” that contained the “liver of a mummified person” — is protected “under the Convention on Cultural Property Implementation Act of 1983, which restricts the import of certain archaeological and ethnological materials.”