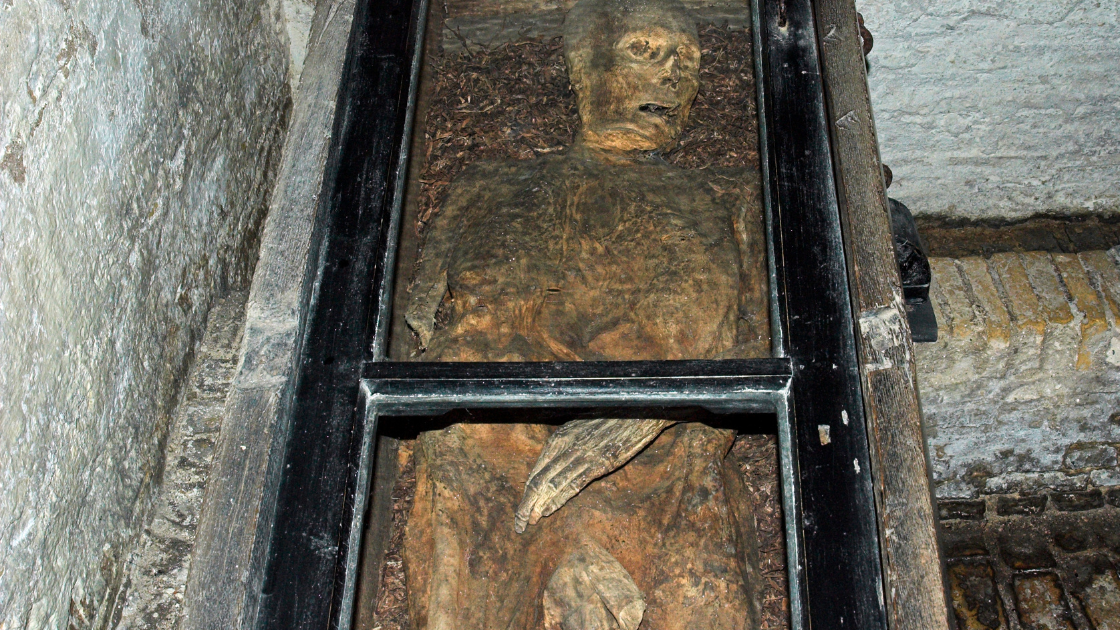 Mummification was long ago made famous – and rightly so – by the highly visible King Tut set.  As a method of conveyance to the afterlife, it’s got some style; “mummification” sounds permanent, an impression bearing all the more gravitas with the specter of those improbably-sized pyramids hanging over it.

But as a general method of disposition, it’s an unlikely one; trends are moving in the other direction, as a rule more on the order of faster disarticulation (cremation, alkaline hydrolysis) than archival-level storage.  But for those who would consider the eternity game, like cryonics or cloning or suchlike, modern mummification may hold some appeal.

Although the Egyptian historical variety is the most commonly recognized manner of mummy, the process of mummification spans thousands of years over multiple continents; it’s currently practiced in various forms in Japan, Papua New Guinea, present-day America and elsewhere, by various methods.  To be exposed to the process in other cultures, it would be necessary to travel and join the community; an altogether more reliable way to explore the possibility, as well as the most authentic.

The only commercial option as of this date appears to be SUMMUM, a religious organization with facilities located in Salt Lake City, Utah.  SUMMUM claims to be the only modern organization of its kind capable of implementing a process of mummifying mortal remains according to an original, proprietary method.  Cost is approximately $67,000 USD.  SUMMUM’s process is tightly guarded.

The purpose and appeal of mummification is to maintain the body as much as possible until “science catches up”, allowing the preserved to bypass death completely, be cloned, or just “restart” themselves.

Regulations and mandatory paperwork — among numerous other restrictions — require relinquishment of the right to view the remains at any time after SUMMUM has obtained them… which seems like a waste of a mummy to me.  Wouldn’t you want to admire all that hard work?

Where the Magic Happens

Most forensic knowledge about the ancient Egyptians’ work comes from close attention to their results.  Our modern-day scientists have been studying ancient mummified remains in depth with an eye toward reproducing the Egyptian processes, which have achieved truly remarkable effects.  Our guys?  Not so much.

So far consensus is that the process is about the same now as it was for Pharaoh, near as we can tell, though details of the “special sauce” are lost forever; aridity and heat play critical roles, and an essential component of the process is a substance called natron, a compound of sodium carbonate and bicarbonate which occurs naturally and can be mined from the earth.  Other exact components of the Egyptian methods have withdrawn into the hazy mists of history.

But as long as the mummified fruit of their labors remains to be studied in the here-and-now, the work continues: current and recent experiments are applying evolving models to mice, rats, rabbits, fish, ducks, and pig cadavers, as well as human lower limbs, tissues, and, in at least one case, a placenta.

Such is the search for all knowledge.