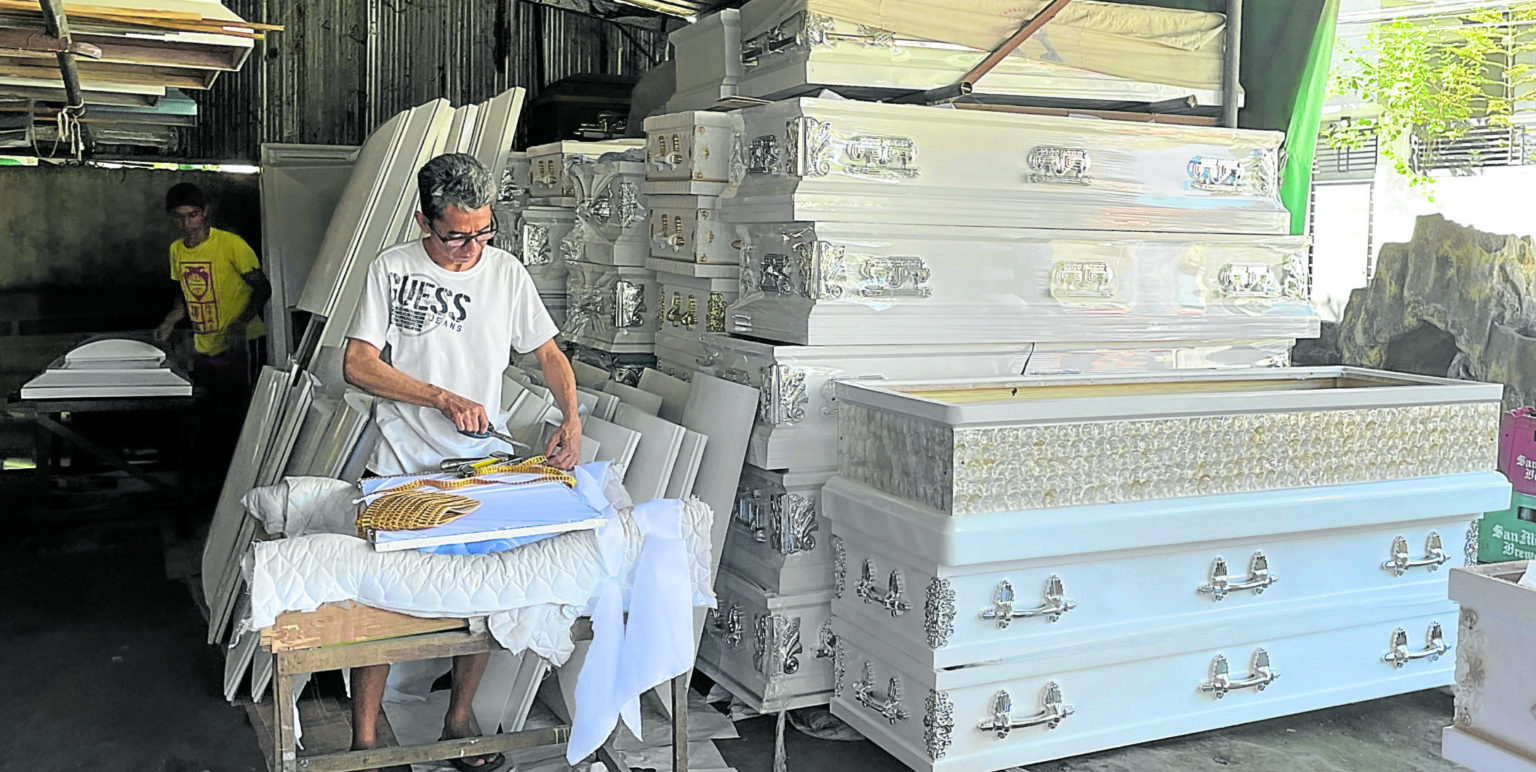 New generations of artisans are keeping traditional rituals alive, protecting old ways of honoring the dead in ways and reflecting the culture in its current forms.

During the Qing Dynasty in China (1600 – early 1900’s), a village not far from Beijing set upon a journey establishing an identity founded in death care that continues to this day.  In a culture that even in modern times doesn’t mention death because it’s perceived as bad luck, the village of Mibeizhuang, in Hebei Province, is known for its many crafters of joss paper products.

Also called “ghost money” or “spirit money,” joss paper is used in the creation of traditional artifacts used during Chinese funerals and death rites.  Residents of the village turn the paper into folded artefacts which will be purchased and used in a particular way as gifts to the deceased.  Any and everything can be represented in joss:  electronics, dwellings, cars, even property deeds and passports.  The paper objects are then purchased and burned as offerings to the ancestors.

Coffins and wreaths as well as other traditional funeral objects also contribute to the community’s “death work” culture.  The Beijing News reports that the majority of Mibeizhuang’s residents are employed in the business of supplying funerals, with an annual production of up to 1 billion yuan (roughly $156M USD).  Now, after successfully dominating the industry for hundreds of years, Mibeizhuang is working to update its business model to observe the modern environmentally-conscious ban on burning joss paper.

It’s the Thought That Counts

The ”Casket Capital” of the Phillipines, Pampanga, Philippines, enjoys similar renown.  Going back generations, senior artisans have been filling much of the nation’s demand for coffins for years.

Their reputation for superior products is well-earned.  Established master craftsmen train the new generation in the secrets of the trade and business philosophy, with its emphasis to “respect the dead by making quality coffins”.   To the craftsmen, it’s a badge of honor to supply a noble service, and a way to honor life through honoring the dead.  In addition to metal coffins and other funeral services supplied by Sto. Tomas Councilor Danilo Aniciete, special horse-drawn hearses of elaborate metal designs may be rented to further distinguish the funeral cortege.

Not Your Average Headstone

Death rites and of the Tlingit since the 19th century include the building of mortuary poles, a type of totem pole with the purpose of recognizing the life and accomplishments of the recently deceased.  Over time, these poles have been the object of theft, criminalization (when the rites involved in erecting the poles in front of the home of the deceased, the “Potlatch Ceremony,” were outlawed), and rank curiosity, removed without permission from where they’d been ceremonially raised in honor of the dead.  Taken, they are displayed across the world as curios, relocated like other regional funerary artifacts to various clubhouses, personal collections, or museums, recast from their original purpose as dignified memorials to mishandled curios for public or personal consumption.  It is good news that in recent years, a movement has with varying degrees of success begun to return community artefacts such as the mortuary poles to their rightful places.

Various kinds of mortuary poles were and are still built traditionally in the Pacific Northwest.  Some of a double pole design even held actual coffins aloft at the top:

“The commonly used term “Totem Pole” refers to the tall cedar poles with multiple figures carved by Native people of the northern Northwest Coast. Several different types of monumental poles include: Mortuary poles made in the nineteenth century which housed the coffins of important people in a niche at the top; free standing memorial poles placed in front of houses to honour deceased chiefs; house frontal poles placed against the house front, often serving as doorways of houses; carved interior house posts that support roof beams. Carved of red cedar logs, the figures on totem poles are inherited crests, which identify the pole owners and tell their family histories (source).”

A true community form of artistry, mortuary poles are still built and placed today, through traditional materials and processes, often in recognition of the manner of content, as the poles were often served the purpose of obituary and headstone both.  Figures and representations of memorable traits and moments in the life of the deceased are carved for memorialization.  Placement rites and ceremonies are also widely back in observation.

Changing of the Guard

And now, new generations keep the traditional ritual alive, protecting old ways of honoring the dead in ways and reflecting the culture in its current forms. Alison Bremner, a young Tlingit woman who apprenticed with David A. Boxley, a Tsimshian tribe member and master carver, is recognized as likely the first Tlingit woman to carve and raise a totem pole. Known for senses of humor and pop culture, her unique work has earned her a reputation for its personality and distinction: she created a totem pole with an image of her grandfather holding a thermos, and a paddle adorned by Burt Reynolds in his famous all his natural 1970’s glory.

Currently working in Juneau, she crafts ceremonial clothing and jewelry, paintings, and formline prints and woodcarvings as well as mixed-media sculpture and digital art.