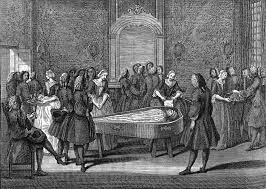 The United States is a young country, relatively speaking.  Most of the traditions we observe in caring for our dead came along with the original settlers, absorbed more or less organically into the population after a while.  But we’ve been in business now long enough to have introduced a thing or two to the field of death care, even generating ideas of influence.

For example, we’ve brought to the party death doulas – assistants trained to the highly-specific task of easing a person’s passing over into the great unknown.  Death doulas were early harbingers of the “Death Positive” movement, a recent iteration of an ever-evolving industry that accelerates and changes with the speed of technology.

In the spirit of discovery of the strange and possibly twisted, here’s a little profile of four of the most unique roles to be filled in the field of death care from around the world, current and historical:

Worst side gig ever

Sin Eater (Ireland, historical):  In 18th and 19th century Ireland, the role of the Sin Eater was to consume the unconfessed sins of the deceased.  The way this was accomplished was through placement of a piece of bread or other ritual meal upon the corpse, which was intended to absorb the unconfessed sins.  The Sin Eater would face east, consumed the bread and ale, and pronounce ‘the ease and rest of the soul departed,’ as he defiling his own soul with the sins of the dead in exchange for a groat (4 pence).  Sin Eaters were feared and despised, though generally seen as a social necessity.  Most modern accounts of the practice identify it as pretty much the worst freelance gig ever.

Chevra Kaddisha (Israel, modern and historical).  Members of this sacred burial society ritually prepare bodies for burial; women preparing women and men preparing men.  The process is as follows:  Wash the entire body without ever allowing it to face downward; dress the deceased in white burial shroud, a simple design worn by all, rich or poor.  Men are buried with prayer shawls which have been rendered ineffective by cutting off one of the fringes.  The body is never left alone from the moment of death.  This one is pretty much what you’d expect from ye olde sacred burial society.

Funeral Strippers (Taiwan, China; modern):  Okay, seriously?  The Chinese/Taiwanese funeral strippers are kind of my favorites.  I mean, they’re FUNERAL STRIPPERS.  The “strippers” part truly does not really require much exposition, but as to why their presence would be necessary, or even tolerated, well, that goes to attendance.  The prestige of a well-populated service.  They’re a gimmick, if you can believe that, but becoming less and less popular all the time, according to some sources.

The Sagdid Dog (Zoroastrianism: Iran, India; historical):  “Sagdid” means “glance of the dog.”  This rite during a funeral celebration involves an actual dog of specific colorings and markings, and actually gets a little surreal at times, calling for a dog with four eyes and other highly specific and improbable details.  The rite has special significance within Zoroastrianism, in which dogs are quite highly revered. A selected dog is brought in and allowed to look at the deceased; the purpose is to scare off evil spirits and ensure the person is actually dead:

… rite of sagdīd (lit., “seen by the dog”) was evolved, evidently from the belief that [the dog] has the power to do so. For this rite a dog (male and at least four months old) was brought to look at a corpse before it was carried to the daḵma, in order to lessen the contamination. (source)

What a good boy!

It is tempting to wonder where they came up with this stuff, particularly the first and third options, but odd roles filled by living beings is just the beginning of it.  Wait until you hear about the Japanese Corpse Hotels.