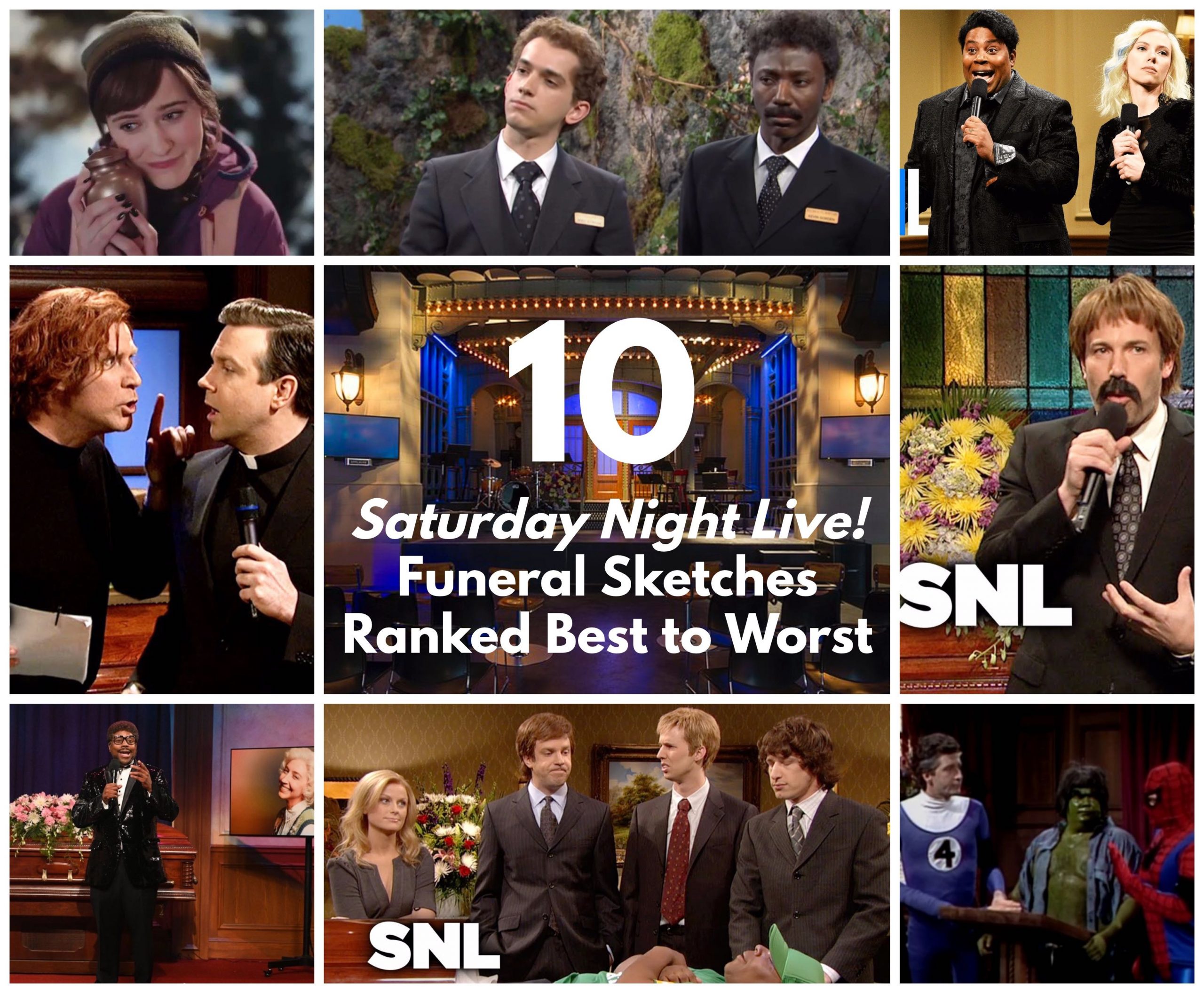 When we read this blog by Jess Farren (Fowler) on the The ASD Blog, we thought it was too good not to share with our Connecting Directors audience! Even if you saw it on ASD’s site, we believe you’ll enjoy it again, because who doesn’t love SNL . . . and funerals?! We’d like to thank Jess and ASD for their work and their gracious permission to reprint the post here.

Recently, America was treated to yet another funeral skit on Saturday Night Live! While watching the comedic scene unfold, we wondered where it ranked among past sketches that depicted the deathcare profession. Funeral directors know all too well the feeling of watching SNL parody of their lives. That moment when you see a funeral setting appear on the screen and your mind prepares itself.

Here it comes. This is going to be either really good or really bad.

Through the decades, the longest-running sketch comedy show has chosen funeral-related humor as a focus of many sketches, with mixed results. While some of the videos are undeniably hysterical, others are so cringe-worthy you can’t help but wonder how they ever got the green light. It’s not hard to understand why SNL loves funeral sketches. There is something undeniably funny about combining a ridiculous scenario or idea with such a somber and serious setting.

However, some comedy writers seem to think that just putting characters in a funeral home is enough to make a sketch hilarious. Other rely on the same old “shocked mourners” cliché a little too much. Then there are the ones that think outside of the box—quite literally speaking—and urn a place among the greatest all-time skits. Below, we take a look at the best and worst SNL funeral skits from throughout the years. (Please keep in mind that all humor in subjective and that none of the sketches in the videos below are meant to be taken seriously).

For those looking for a way to repel unwanted conversations, SNL has created the perfect product. While this fake advertisement bit from 2019 is not a traditional funeral sketch, we love that the writers recognized there is a lot of humor that can be found in memorial rituals without relying on the all-too-familiar funeral parlor setting. In the fake commercial, women trick men into believing they are scattering a loved one’s ashes with a fake urn (which also doubles as a water bottle!) The product promises “to kill small talk dead.”

Every second of this video is pure comedy gold but our favorite part has to be when Keenan Thompson awkwardly backs away from Kate McKinnon and says, “Oh… I’m sorry. I’m interrupting a little funeral.” Funny enough, many of the comments left on the Leave Me Alurn video are from women who are asking for this product to be made for real and claiming they would be buy one if available. So, perhaps there could be a side hustle opportunity for funeral homes?

This funeral sketch from 2009 is filled with many SNL greats from the early 00s. The sketch is a hysterical send up of what can happen when you invite funeral guests to share remembrances of the deceased at the end of a ceremony. Funeral directors know all too well that in real life, both hilarity and awkwardness can often follow the words, “Would anyone else like to come up here and share some remarks?”

Featuring a host of hilarious eccentrics that decide to address the crowd gathered in remembrance of Joseph, this skit truly has it all. From Kristen Wiig breathlessly asking for help killing a rodent in her home to Will Forte’s inimitable portrayal of a man haunted by death, it is hard to pick our favorite character. While we love Will Ferrell’s speedy stand-up comedian and Jason Sedeikis shines in his role as the ever-exasperated priest, we have to give it to Maya Rudolph. The line, “I have not known this guy for no time at all. But one thing I do know? Sasquatches are real!” will always make us chuckle.

Airing earlier this week, the most recent funeral skit from SNL features deadpan humor at its best. New cast members, Andrew Dismukes and Jerrod Carmichael are truly hilarious as clueless funeral directors who don’t understand why a family wouldn’t want their loved one’s corpse to be thrown off a cliff face. The best part is watching how Dismukes and Carmichael keep a straight face while saying lines like, “You got the body aspect of a burial, but we still got to throw him.”

The premise is so absurd that we can’t imagine any actual funeral director would take offense to such an obviously ridiculous depiction. If anything, this sketch is kind of proof that you would not last long working in the funeral business without common sense (“and that’s a deal breaker for you guys?”).We especially loved the part when the family asks the funeral director why he bothered to bring an urn if he hadn’t cremated the body and he replies that the urn was actually a thermos for holding soup that he picked up at a mortician’s conference. After all of the funeral home conventions we have attended over the years, we actually would not be at all surprised if it turned out soup urns were a real thing.

As a funeral director, you likely are passionate about helping to ensure prearranged funeral wishes are always honored. But what happens when a person’s final wishes are to make everyone at their funeral feel awkward? That is the idea behind this hysterical sketch which features Keenan Thompson as casino singer Levar B. Burton carrying out his friend’s last wish to singing R. Kelly’s “I Believe I Can Fly” at her funeral.

After some side-splitting reaction shots of funeral guests, the woman’s family decides its ok to listen to the song if it was Nana’s last wish. The sketch then culminates with the memorial slideshow displaying photos of Nana with other disgraced or controversial figures like Bill Cosby and Kevin Spacey. It is a hilarious bit that gets funnier every time you watch it.

While not a direct funeral parody, this gut-busting fake advertisement instead examines the importance of having dignity in death. As a funeral director, you know that people sometimes pass away in uncompromising positions. So, this fictitious product can help “if you’re on the toilet and find yourself dying.” While the idea of a toilet seat that prevents seniors from dying on the crapper is hilarious on its own, the best part of this one is the straight-faced narration by SNL comedy writer-turned-host, John Mulaney. Mulaney famously wrote the skit back in 2009 and finally got to see it air in 2019 when he hosted the show.

6. A Hiccup in the Eulogy

This sketch is proof that SNL’s tradition of parodying funeral service dates back to the show’s very first season in 1976. In this classic skit filled with comedy icons like Chevy Chase, Dan Akroyd and Gilda Radner, a priest delivering a eulogy cannot stop hiccupping. The family then stands up one by one to employ different methods of assisting him with getting rid of his hiccups. A timeless example of great physical comedy, this sketch plays well on the idea that people cannot seem to stop themselves from trying to help when someone else has the hiccups. While it’s certainly a humorous bit, it definitely drags on a bit too long and never really crosses over that line into laugh out loud funny.

7. Clubbing at the Funeral Home

In this weird but oddly enjoyable sketch, Dan and Didi (played by Kenan Thompson and Scarlett Johnansson) pay tribute to their departed friend David by performing a musical tribute. It is revealed that the deceased had a special love for “deep club tracks” which, it turns out, are quite awkward to hear at a funeral service. While the lyrical content is hilarious in its over-the-top inappropriateness, the best part about this sketch is the confused reactions from the deceased man’s wife and others in attendance. How much you enjoy this one very much depends on how much you enjoy musical sketches featuring Kenan Thompson. For this writer, they always feel a little forced but if it’s your thang, hey, “serve it up, turn it out, work it up, shake it down!”

As we make our way further down our list, we have some SNL funeral skits that just fell flat. We don’t deny this 2013 sketch about a man who fakes his death to hear what people say about him at his funeral made us laugh a handful of times, but on the whole it is entirely too dependent on Ben Affleck doing a funny accent. While Affleck is supposed to be what’s funny about the bit, most of humorous moments come from SNL players such as Taran Killam and Jason Sedeikis. We much prefer the episode of Friends that used this same premise firist over this one-note and poorly written skit.

Marvel and DC comic heroes exist together in the same universe and even that can’t save this campy skit from the early 90s SNL cast. Nearly every written line falls flat with the audience which makes this quite an awkward watch. We have to give them credit for at least coming up with an original idea as this sketch is certainly different than any other one on this list. However, without the Hulk’s eulogy (delivered hilariously by Chris Farley) and Lois Lane’s confusion over why Clark Kent isn’t in attendance, this sketch would be devoid of a single truly funny moment.

You’d be forgiven for thinking this sketch from the early 00s is over ten minutes. It seems to suspend time in a loop of bad jokes and cringeworthy dialogue. The story features eight friends gathering for another friend’s funeral sharing trite remarks. The next day, they gather again because another one of them has died, and so the skit repeats…seven. dang. times. After sitting through that, we then see the skit culminate with a very dumb and unsatisfying conclusion. (The funeral director was the evil mastermind behind it all – who could have seen that one coming?)

This sketch just feels so clumsy and awkward that you can’t help but wonder if the cast even bothered to rehearse it at all. Just about everyone struggles with dialogue and questionable comedic choices (what is with the point of having him wear a little league uniform? Why do the writers think Lasik eye surgery is funny? Why did they decide to make it a funeral home commercial at the very end?) It’s pretty bad if the only funny moments from the whole thing are the cast members breaking character. We can’t blame them from trying to inject a bit of actual humor into this stiff and lifeless sketch.

Jess Farren (Fowler) is a Public Relations Specialist and Staff Writer who has been a part of the ASD team since 2003. Jess manages ASD’s company blog and has been published in several funeral trade magazines. She has written articles on a variety of subjects including communication, business planning, technology, marketing and funeral trends. You can contact Jess directly at Jess@myASD.com