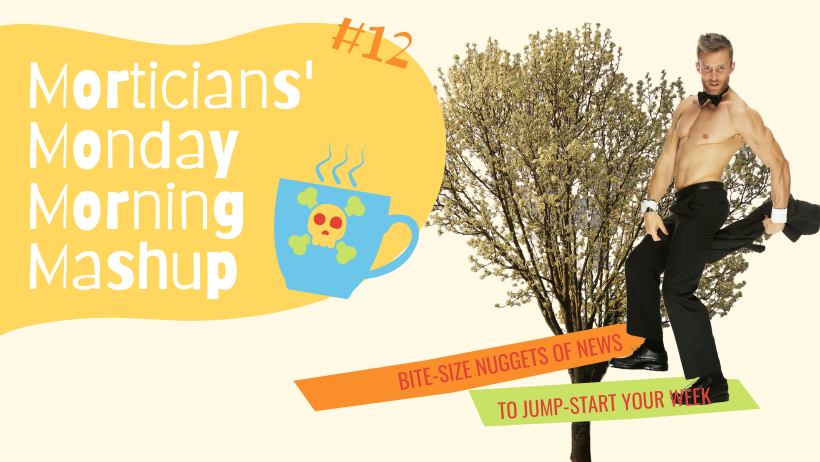 Welcome to the twelfth edition of Morticians’ Monday Morning Mashup, where we’ll serve up bite-sized, easily-digestible nuggets of the deathcare news you need to crush conversations in the week ahead. Bon appetit!

Death to the Bradford Pear

As I read yet another story about the terrible last days of Affordable Cremations, the now-shuttered and condemned crematory in Maine, we found this story about the contract the state has put out on the beautiful Bradford pear tree. OK, so they haven’t actually hired a hitman, but this article makes it sound like the poor tree has been convicted as a public nuisance. Apparently, the incredibly invasive and seriously stinky Bradford pear is out of control. Horticulturists have “reports of it escaping” into natural areas and crossing state lines into Connecticut. They hope the state will soon ban future sales of the tree and maybe even offer a “bounty to eradicate existing trees” like South Carolina has done.

Andrew Scheid, former owner of Andrew Scheid Funeral Home in Lancaster, PA, was formally sentenced last week to 3 to 12 months in prison for abuse of a corpse and tampering with public records. In January 2020, investigators following up on complaints from families found unembalmed four bodies that weren’t properly stored. They also determined Scheid put inaccurate information on death certificates. Scheid could have received up to 36 years in prison and $80,000 in fines, but got a lesser sentence, plus nine months of house arrest and five years of probation because he pleaded no contest to the charges.

In 2019, a New Zealand couple who owned a cremation service took a young newly-separated friend into their home. Soon the friend, 31-year-old Shane Casbolt, reconciled with his wife and she too moved in, but the relationship couldn’t survive lockdown, so the friend moved out, leaving his wife behind. Now that “friend” has turned on the couple, David and Kym Zelton, for supposedly supporting the wife in a custody battle, and is allegedly disparaging them and their former company, Integrity Cremations, on social media. Casbolt, a former stripper, volunteer firefighter, and would-be owner of a “sketchy street hospital,” even posed as an investigator with a false name to solicit a complaint about the crematory from one of the families it served. Geez.

We don’t know if the good folks at Littleton and Rue Funeral Home in Springfield, Ohio were part of that 13% (if not, we hope they’ll participate next year!), but we’re excited to see that they’ve broken ground on a $2 million, 5,500 square foot structure for memorial gatherings and much more. The Landing at Littleton and Rue will be near the existing funeral home and feature large windows, an outdoor patio, and an indoor fireplace. The space will also include a new crematorium for humans and another for pets. Who says a 135-year-old funeral home can’t innovate!