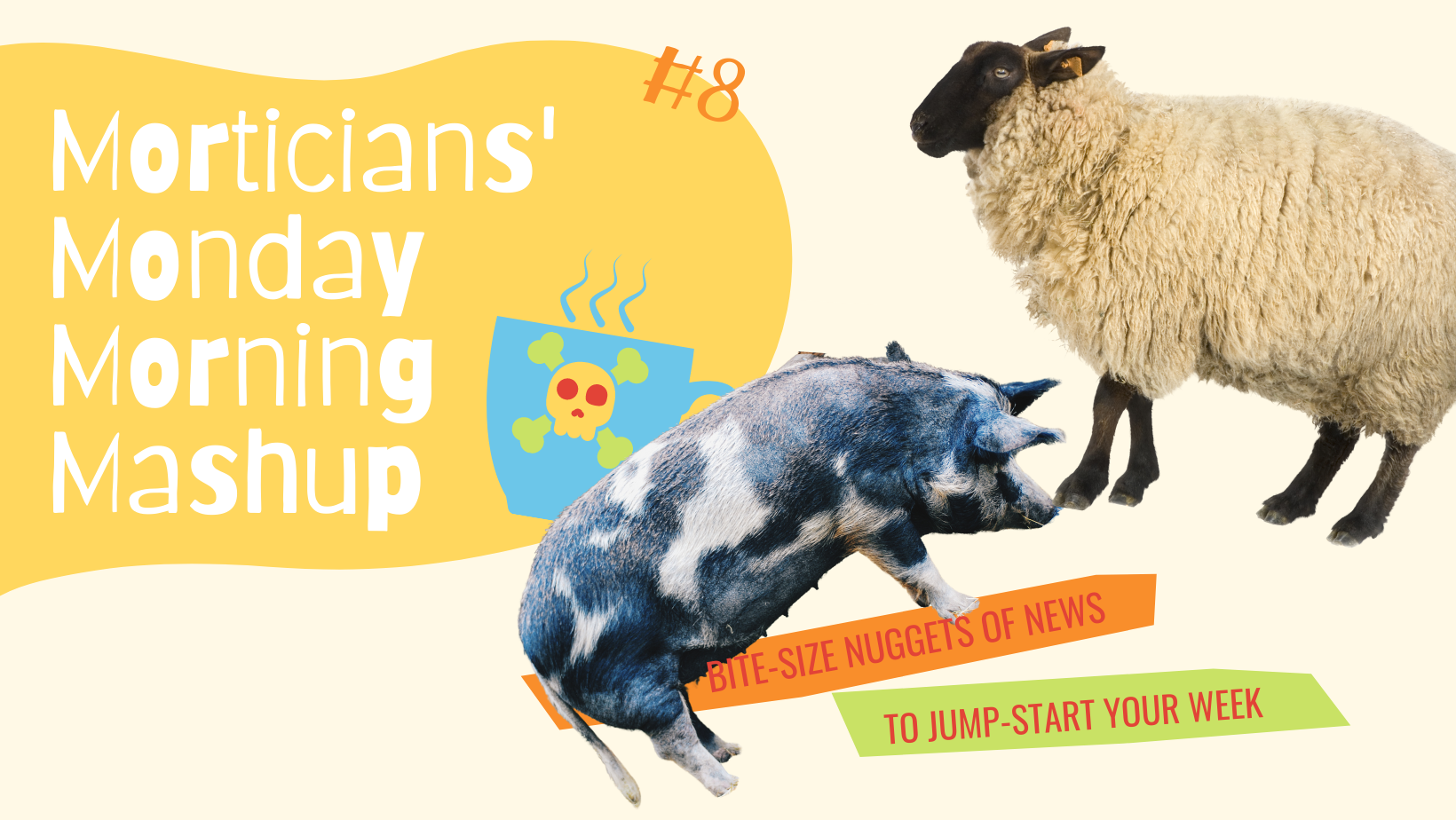 Welcome to the eighth edition of Morticians’ Monday Morning Mashup, where we’ll serve up bite-sized, easily-digestible nuggets of the deathcare news you need to crush conversations in the week ahead. Bon appetit!

Postcard from the Edge

Last week columnist Vance Lauderdale shared in Memphis Magazine a lovely vintage postcard from 1944. The front of the card features a hand-colored image of S.W. Qualls Funeral Home — still in operation today in Memphis as Bond Funeral Directors. What intrigued Mr. Lauderdale, however, wasn’t the image, but the message on the back, which he describes here:

“Someone named ‘Diana’ has chosen this card — of a funeral home — to tell him:Dearest Darling, Still thinking of you and wishing you were here. Will write soon.’ My goodness. Is she really wishing that her ‘Dearest Darling’ was at a … funeral parlor??? I just don’t know what to make of this. Either she didn’t care what was on the front, or the card was meant as a joke — or maybe even a veiled threat.”

Here at Connecting Directors we always want to believe in the good in people, and try our best not to focus on the negative. However, this past week saw a slew of bad characters in the deathcare space; the only positive in their stories is that they can serve as models of what not to do. So here’s a quick update:

First it was coyotes, then it was junkyard dogs, and now it’s hogs. This is the third story we’ve shared here in 4M about non-human visitors to cemeteries, and this time, as with the invading rottweilers, they are not a welcome sight. An Arkansas hog owner has been charged with criminal mischief after letting dozens of hogs run loose, subsequently uprooting grass and knocking over headstones in a county cemetery. If the damages to the cemetery surpass $1,000, the owner could face felony charges.

Yes, you read that heading right. Last week Kanye — sorry — “Ye” West (as he recently officially changed his name) told the UK’s The Guardian that one of his top five artworks is from Damien Hirst, who is known for his “formaldehyde animals.” West said he “bought a black sheep in embalming fluid from the artist — ‘that’s me’ — and an embalmed dove for Kim Kardashian West.” Why embalming fluid? Hirst told one outlet that he “chose the material precisely for its hazardous, skin-burning properties. ‘If you breathe it in it chokes you and it looks like water,’ the artist explains.” Well, ok then.

A 2012 study revealed that some of Hirst’s art pieces were actually emitting formaldehyde fumes during a museum show, but not at hazardous levels. At least Hirst has stuck to using only embalmed animals in his work. He’s said, though, that at one point he “flirted with the idea” of “placing human corpses in formaldehyde.” I’ll just leave that one right there.