10 of the Oldest Funeral Homes in the U.S. 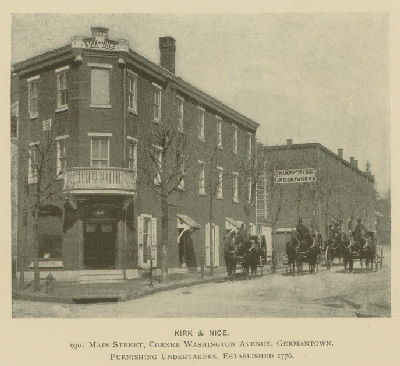 10 of the Oldest Funeral Homes in the U.S.

Thanks to Connecting Directors contributor Eric Pereira for this compilation.

Many funeral homes pride themselves on decades (even centuries) of work and carrying a name that reflects that legacy. So, what are some funeral homes in the U.S. today that have earned the title of “oldest?” Exactly makes an establishment eligible for this title can be quite controversial. Changes in ownership or location, origins as cabinet or coffin makers, and stints where a facility was closed and subsequently reopened definitely complicate the matter. For this list, we’ve done our best to scour deathcare websites, historical registers, and even enlisted assistance from the National Museum of Funeral History – but even so, we make no promises. If you know of a funeral home that deserves the distinction of one of the oldest in the United States, let us know!

Claiming to be the oldest funeral home in America, Bucktrout opened in 1759. They began as casket makers in Colonial Williamsburg. “When neighbors and friends passed away, Benjamin Bucktrout and Anthony Hay would generously make wooden caskets and provide burial on the Bucktrout farm. Over time, the company transitioned into a funeral home,” their website says. The funeral home was presumably the first in the country to own and operate a crematory as well.

The Altmeyer family purchased Bucktrout Funeral Home in September 2011 and restored and renovated the historic location.

The Kirk & Nice website establishes its founding date as 1761, therefore giving them a legitimate claim as the “oldest, continuously operating funeral establishment in the United States.”

Like many older funeral homes, Kirk & Nice started as a cabinetry shop. Owner Jacob Knorr opened for business in 1761 in Philadelphia, offering coffins in addition to other woodworks.

The shop changed hands multiple times after Knorr’s death, finally being sold to John Nice. Benjamin R. Kirk became an apprentice to Nice in 1848 and eventually married into the Nice family. Kirk bought the business, and since 1869, the firm has been called Kirk and Nice.

Today, the Nice line has vanished, and as of 1988, the widow of the seventh-generation Kirk was the last true family owner.

Started by Swiss Mennonite Johannes Bachman in 1769, Bachman Snyder Funeral Home is now in its eighth generation as a family-run business. According to its website, the business is the “oldest and longest-running funeral services” provider in the U.S.

In 2019, Bachman Funeral Home merged with Charles F. Snyder Funeral Homes & Crematory in 2019. The latter is a third-generation family business founded more than 70 years ago.

Bachman Funeral Home was featured on CNN’s 5 of the oldest businesses in America. They report the carpentry shop stopped making coffins and became a funeral parlor in 1910.

In business since 1847, the establishment was founded by William Keller as an undertaker and coffin maker business. It was located on the corner of Pine and Bank Streets in Easton, Pennsylvania. Frank Ashton, who worked for Keller, later married Keller’s daughter and assumed responsibility for running the business.

Walter Ashton joined in the 1890s and opened the first funeral parlor at 31 North Fourth Street. When Walter passed, his widow, Anna Ashton, proceeded as funeral director. In 1921, she became one of the first female licensed funeral directors in Pennsylvania.

The Wendt family has been in the funeral business for six generations. In 1866, J. Robert Earler, a cabinetmaker, was asked to build caskets for farmers. “When a person passed away in those days, the funeral was usually conducted in the home of the deceased, and the burial was in a plot on the family farm,” the organization’s website reads.

Following the Civil War, Earler’s son-in-law, August H. Wendt, took over the business. It would continue to be run by legacies. The home is now run by Earl Wendt IV, the sixth generation in the family business. The large Victorian that currently houses the establisment was actually built in Moline in 1902. It was purchased by Earl and Robert Wendt in 1929.

The McElhaney – Hart Funeral Home was originally established in 1870 by Marion B. Stultz. The W.R. Briggs Family purchased the business in 1930. Today, you will find the business in the Taylor-Zent home, a historic landmark purchased by the Briggs Family. Several purchases have led to name changes of the business. However, they still pride themselves on local family ownership inside this Romanesque revival home.

Oliver H. Bair started this funeral business in 1878 in Philadelphia. In 1920, he moved the operation to Upper Darby, on the outskirts of the city. The original building is listed on the National Register of Historic Places. It was built of steel and concrete and known as “one of the finest establishments of its kind in the country.”

Being established in 1879 on the Texas frontier earns Brown Owens & Brumley Funeral Home the distinction as the first and oldest funeral home in Fort Worth. Founder George L. Gause and five generations of his descendants served families for over 100 years. After a tragic fire in 1979, the Gause family relocated and purchased competitor Owens & Brumley Funeral Home, which had been in business since 1922. Several acquisitions and expansions – and thus, name changes – followed.

The building in which Guido Funeral Home resides, a Greek Revival known as the John Rankin House, is rumored to be haunted. It was placed on the National Register of Historic Places as a Federal landmark in 1978.

In 1885, after apprenticing to learn the art of embalming and funeral celebration, William H. Healy opened his own funeral business in Yorkville, Illinois. He moved to Aurora in 1891 and added furniture-making to his undertaking offerings. Just four years later he dropped furniture to concentrate on funerals and was soon joined by his brother and son. The business flourished, and in 1927 the Healys commissioned the construction of a new, larger location. Opening in 1928 as Healy Chapel, this was one of the first buildings in the United States to be designed and constructed specifically as a funeral home. It was added to the National Register of Historical Places in 1985. The organization is still owned and managed by descendants of W. H. Healy.