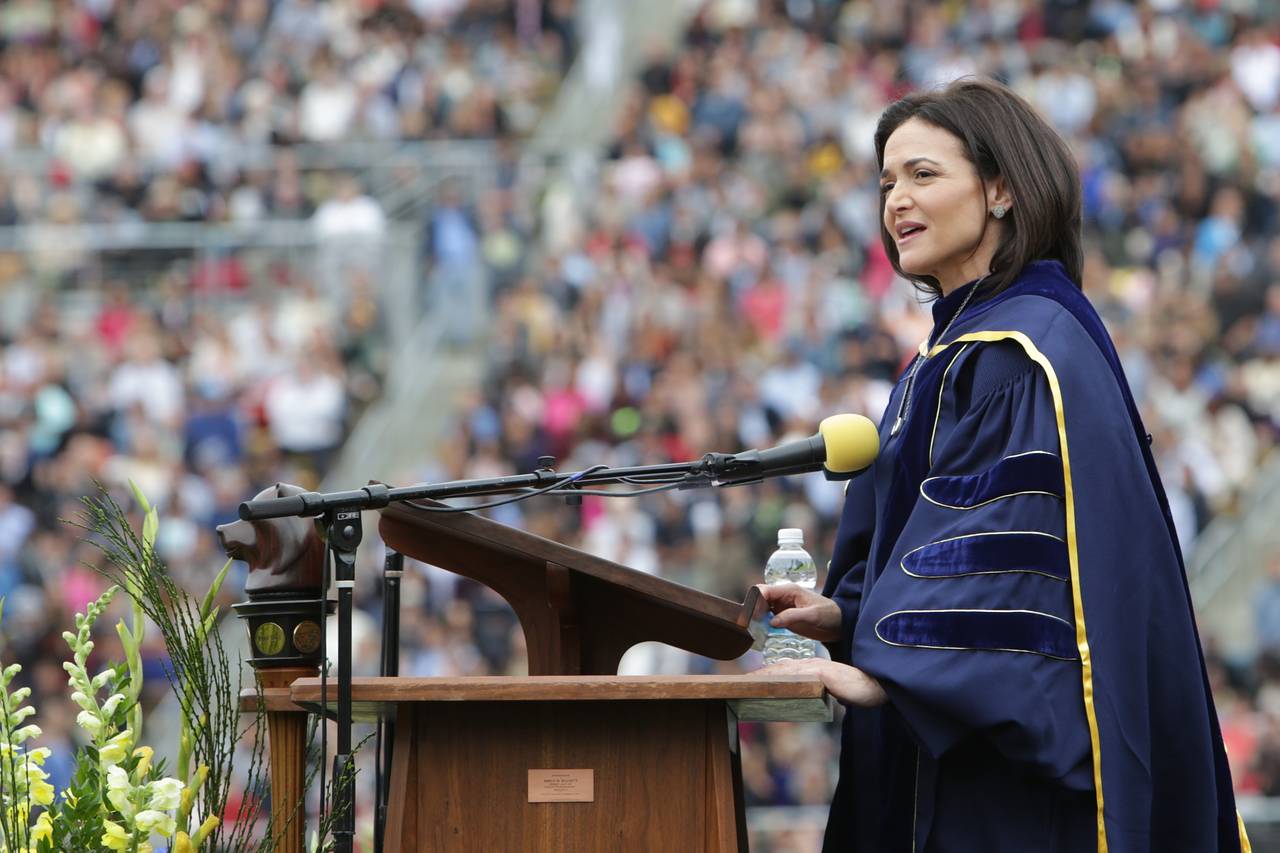 Facebook’s operating chief opens up about her personal struggles after her husband’s death last year.

Sheryl Sandberg, Facebook Inc.’s chief operating officer, on Saturday opened up about her personal struggles since the death of her husband last year, in a commencement speech at University of California at Berkeley.

Her speech at Berkeley contrasted with the tone of her commencement speech at City Colleges of Chicago two years ago. That address focused on ambition, confidence and gender inequality, themes she hit on in her 2013 book “Lean In.”

It was the first time Ms. Sandberg spoke publicly about the aftermath of the passing last May of her husband Dave Goldberg, chief executive of online-questionnaire provider SurveyMonkey. Wavering between tears and laughter, and wearing a graduation gown in Berkeley’s blue and gold, Ms. Sandberg talked of the irony of finding gratitude through death, took a couple digs at Silicon Valley rivals, and revealed her New Year’s resolution.

Here are four excerpts from Ms. Sandberg’s speech at Berkeley:

Following the death of Mr. Goldberg, a psychologist friend of Ms. Sandberg suggested she think about how much worse things could be. It was counterintuitive: She said she had believed the way to recover was to try to find positive thoughts. He replied, “Dave could have had the same cardiac arrhythmia driving your children.”

Ms. Sandberg said she was overwhelmingly grateful that the rest of her family was alive and healthy. “That gratitude overtook some of the grief.”

“The easy days ahead of you will be easy. It is the hard days—the times that challenge you to your very core—that will determine who you are,” Ms. Sandberg said. “You will be defined not just by what you achieve, but by how you survive.”

This year, Ms. Sandberg said her New Year’s resolution was to write down three moments of joy before going to bed each night. “This simple practice has changed my life. Because no matter what happens each day, I go to bed thinking of something cheerful. Try it.”

In her first job, Ms. Sandberg said her boss found out she didn’t know how to enter data into Lotus software. She went home convinced she was to be fired. “I thought I was terrible at everything…but really I was just terrible at spreadsheets.” Understanding that her weakness was about one skill, not her entire professional potential, would have saved her a lot of anxiety that week, she said.

Ten days after she was widowed, Ms. Sandberg went back to work. “I remember sitting in my first Facebook meeting in a total haze, thinking, ’What is everyone talking about and how could this possibly matter?’” Ms. Sandberg related. “But then I got drawn into the conversation and for a second—the briefest of all seconds—I forgot about death.”

After Mr. Goldberg died, Ms. Sandberg’s rabbi told her time would heal, but for now she should “lean into the suck.” “Not what I meant when I said ’lean in,’” she joked.

Ms. Sandberg also made a friendly jab at Alphabet Inc.’s Google, a company that Facebook competes with for job candidates (and Ms. Sandberg’s former employer). “Everyone who has made it through Cal has already experienced some disappointment. You wanted an A but you got a B. OK, let’s be honest—you got an A-minus but you’re still mad. You applied for an internship at Facebook, but you only got one from Google.”