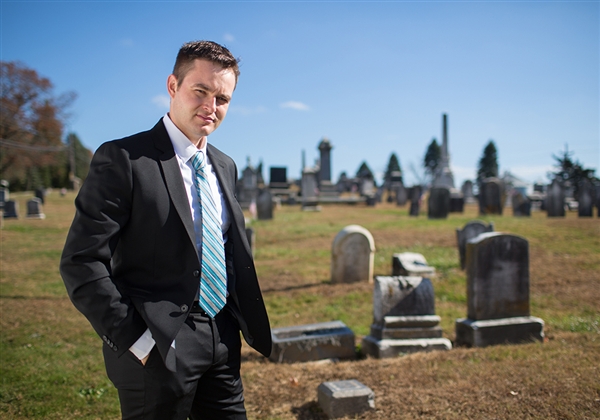 He tweets. He blogs. He embalms.

Caleb Wilde is a sixth-generation mortician, working for the family business in small-town Pennsylvania — a Victorian-style funeral home where the only visible concessions to modernity are two big-screen televisions used by overflow crowds to watch a service.

But when he’s not making 2 a.m. house calls and loading “customers” (the deceased)  into “the pickup” (the hearse), Wilde is engaged in the most modern of pursuits: spreading his very intimate view of death on the web.

The 32-year-old from Parkesburg, Pa. (pop. 3,628)  may just be the undertaker for the overshare generation.

“Death gives you an important perspective on life,” the former theology student says. “It’s a tragedy not to think about death.”

The Wilde family has been in the death business since 1888, but Caleb didn’t have any plans to join them until he realized he couldn’t make ends meet as a humanitarian worker in Madagascar and came aboard 12 years ago.

He started the blog about a year and a half ago and made enough of a splash that a cable TV channel asked him to submit an audition tape for a possible reality show about death rituals around the world that never got off the ground.

Some entries read like Emily Post channeling the Grim Reaper: “If you’re attending a funeral, the best piece of advice I can give you is this: Turn your phone off,” “A family funeral is not a great second date” or “Don’t expect the funeral home staff to let you in on the family dirt. We will not be the source for #NOTTHEBABYDADDY on your Twitter feed.”

Wilde says he began his own Twitter feed so he could reach a younger, hipper audience and “push the envelope” with breezy 140-character commentaries on amusing obituaries, tricked-out hearses, and headstones with unusual names.

He invented the hashtag #hearsebombing for snaps of the funeral home’s modified Chrysler Town and Country in incongruous locations, like the parking lot of Chili’s.

There have been missteps. A post-mortem photo he grabbed off the Internet and put on his Facebook page offended some followers, and when he griped about evening viewings, the daughter of a man who was about to have one sent a sheepish apology.

He gets hate mail from people who think he’s too irreverent — well, he did take a selfie in a casket, practicing his “death look” — or too open about industry secrets.

To wit, a recent post about embalming contained this nugget: “In most states, what is pushed out of the body goes down the drain and out into public sewage. Now you know.”

Wilde’s father, Bill, says he think the blog is “cool” and jokes that his son is “our movie star.” His grandfather, Bud, who boasts that he still dresses most of the bodies for funerals, is less enthralled.

Robby Bates, president of the National Funeral Directors Association, said he had not heard of Wilde but after reading his blog declared him “the future.”

“The more information our families have, the better they’re going to be served,” Bates said. Wilde thinks pulling back the curtain is healthy for a business that got a bad rep with the 1963 publication of Jessica Mitford’s scathing expose “The American Way of Death.”

“Funeral directors can take advantage of people, and a lot of them do,” he says, citing gougers here and there who encourage the bereaved to buy a casket before a cremation, push the most expensive merchandise, or convince the grieving their loved one must be embalmed at extra cost.

Educating the public also dispels misconceptions, like the idea that funeral directors are rolling in it, he says. Wilde drives a BMW M3, but it’s a 2001, and “the bank owns most of it.”

“The other ‘misconception’ is that we’re weird,” he adds. “But that one’s true. Being around death all the time makes you different.”

For Wilde, a decade of ushering folks into the hereafter has shaken his religious beliefs and made him turn to anti-depressants. But it’s also encouraged the married dad — he and his wife adopted a boy more than a year ago — focus on the here and now, something he wants his readers to do.

“We kind of live as though we’re immortal,” he says. “I don’t want to have any regrets because life is fleeting.”

Wilde has, of course, thought about his own death.

“I want a natural burial” — no embalming, the body displayed in his home instead of a mortuary. As for the casket, his pick might be considered heresy by a different breed of funeral director.

“Something small,” he says. “And inexpensive.”