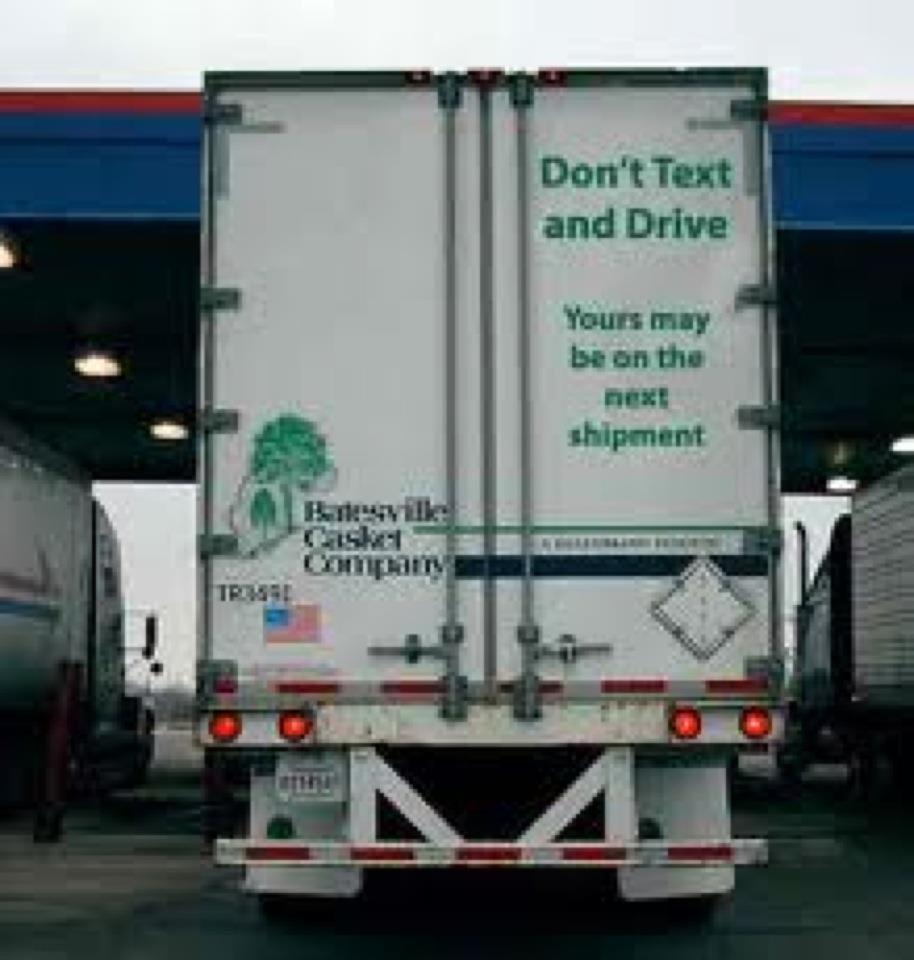 Last week a picture of the back of a Batesville Casket truck was spread around the internet. The Batesville photo was posted on ConnectingDirectors.com as well as other popular funeral service blogs ran by Caleb Wilde and Alan Creedy. The photo also made the rounds on many social media profiles of funeral professionals. It was really a great thing for Batesville. They got a lot of free and positive exposure.

The photo was of the back of a Batesville casket truck and the text on the back of the truck read “Don’t Text and Drive. Yours may be on the next shipment”. Many funeral professionals gave Batesville kudo’s for the marketing message.

Unfortunately, we found out yesterday afternoon that the original photo had been download off an independent photographer’s website and altered. The “anti-texting” message was added to the image and it does not appear on the back of any Batesville casket delivery trucks.

We received the following message from Batesville Director of Brand and Marketing Communication Teresa Gyulafia:

I saw that you’d published an article based on the photo of the Batesville truck that hit the Internet last week. Unfortunately, this is a case where you can’t believe everything you read (or see) online.

While we’re strong supporters of not texting and driving – we have a policy for our own drivers – the image circulating online is not real. The original picture of the back of the Batesville truck was taken by an independent photographer and appeared on his website back in 2010. Apparently someone downloaded that image and altered it.

As you’ve personally experienced, texting while driving is a serious issue with fatal consequences. Because of our business, we do have the opportunity to reinforce this with consumers. Batesville has been part of an anti-texting awareness campaign initiated in 2011 by Finley Advertising of Charlotte, NC. This campaign has already reached millions of teens and adults across the country through a combination of digital billboards, bumper stickers, posters and media coverage.

As an extension of that, we’ve been working on a program for our customers to use in their communities, and if the response we’ve received from this ‘altered’ image is any indication, it will be well received.

I’d like to thank Teresa for reaching out and being honest about the photo. Again, this was very positive for Batesville and she didn’t have to let us know it was an altered image. I would also like to give Batesville Kudo’s for taking an open and active stance against texting while drive and having a policy in place for their own drivers. We are looking forward to the roll out of the program they have been working on for their funeral home customers to use in their own communities.

So, based on the positive response Batesville received from the ‘altered’ image we have to ask: Should they add the anti-texting message to the back of their delivery trucks?