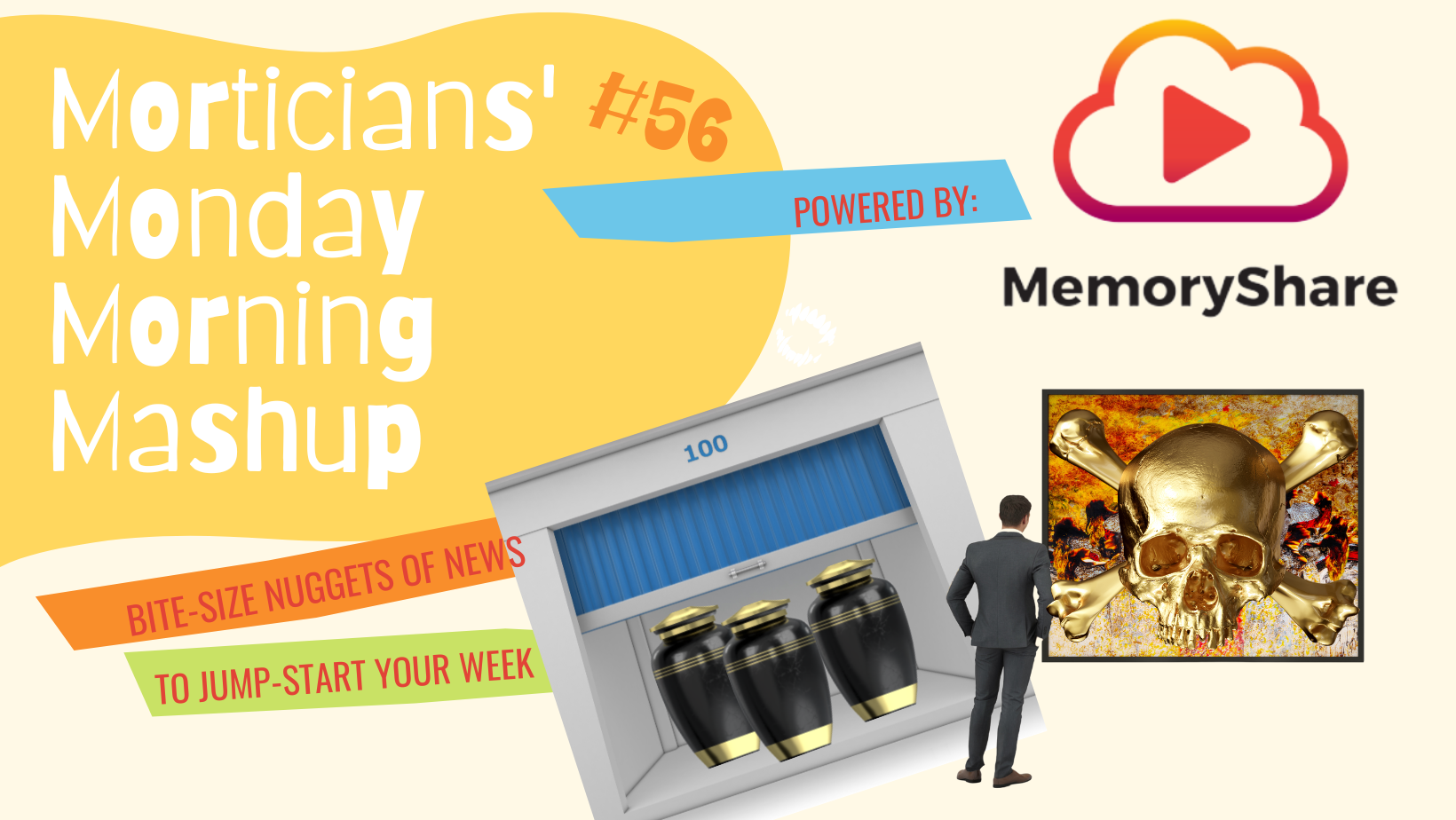 Welcome to the fifty-sixth edition of Morticians’ Monday Morning Mashup, 4M #56, where we’ll serve up bite-sized, easily-digestible nuggets of the deathcare news you need to crush conversations in the week ahead. Bon appetit!

It’s like a super messed-up episode of Storage Wars

Did you know that there’s a large community of folks who make a living buying the contents of “foreclosed” storage units? They’re gambling that the amount they pay will be eclipsed by the potential resellable treasures they discover inside. An Alabama woman named Rebekah, who won the contents of two Mobile storage units with her $30 bid, did indeed find treasures, but not the kind she expected. As it turned out, the units were previously owned by a funeral home, and among the contents were the cremated remains of 13 individuals. Rebekah is now doing her best to reunite the cremains with the decedents’ loved ones. She’s been successful with five families so far. One family member spoke to a local news outlet, saying she had assumed that the funeral home had “taken care of everything” and was shocked to get Rebekah’s call.

As the demand for electricity in South Africa is outpacing supply, rolling blackouts and “load shedding” (planned outages) are becoming commonplace. The energy crisis is forcing funeral homes to turn to generators as an alternative power source to keep coolers chilled and allow them to process death certificates online. With fuel costs still climbing, though, directors are worried about the consequences of becoming powerless. “It could be devastating for the funeral industry,” says John Storom, Funeral Federation of South Africa chairperson. “We’re looking at a disaster in this country.”

Vladimir Putin’s war on the Ukraine is having yet another effect on deathcare, and this time, it’s in Germany. Russia has reduced the gas supply sent to Europe and is suspected to have sabotaged some key pipelines; both actions have led to a serious gas shortage — and thus, sky-high prices and gas rationing — in Germany. Because cemeteries are not in the “Priority 1” category to get supplies, the 180-plus crematories in the country are postponing cremations. Burial is also an issue; not only is it expensive, but forcing families to choose burial over cremation “isn’t respecting a person’s last wish,” says the head of one district’s cemeteries.

Two U.S. senators have introduced the Consensual Donation and Research Integrity Act, which would create standards to ensure donated bodies are not “unknowingly contributed to a for-profit industry in which body brokers take advantage of donors and their families.” If passed, the law would regulate registration, inspection, chain of custody, labeling and packing, and proper disposition. “It’s hard to imagine in this day and age, that whole body donation isn’t regulated,” said NFDA President Randy Anderson. “This will help ensure donors’ bodies are treated with dignity and respect at all times.”

As if on cue, the widow of a victim of illegal body brokering hopes that her participation in a true crime documentary about now-infamous Sunset Mesa Funeral Home will help “to enact laws and prevent this from happening to other families.” Danielle McCarthy’s husband David was taken to Sunset Mesa in Colorado when he passed away in 2017. When the FBI raided the establishment in 2018 and charged the owners with selling bodies without families’ consent, they notified Danielle that the cremains she received may not be of her husband David. If given the green light, the proposed documentary, titled Cremains Unknown, would follow Danielle’s and David’s story. “I want society to do better,” Danielle says. “I am fighting for better.”

A horror filmmaker is opening a museum in order to “spread the fear all year long” in his small Michigan town. Nate Thompson’s Michigan Museum of Horror, which should open this month, will feature funeral and catacomb exhibits, “real human bones” and skulls, embalming fluid, and a “red room with real-life crime scene photos.” Thompson says he is “not personally responsible for any of the nightmares guests may have.”

Members of the Connecticut Funeral Directors Association recently hosted its annual golf tournament to raise money for scholarships for mortuary students. The event also featured a Fill-The-Hearse program, with participants stuffing a brand new hearse (donated for the event by a local dealership) with cans and boxes of food designated for the Connecticut Foodshare charity. What an interesting way to give back to the community, help folks access an education in deathcare, and have great fun in the process!