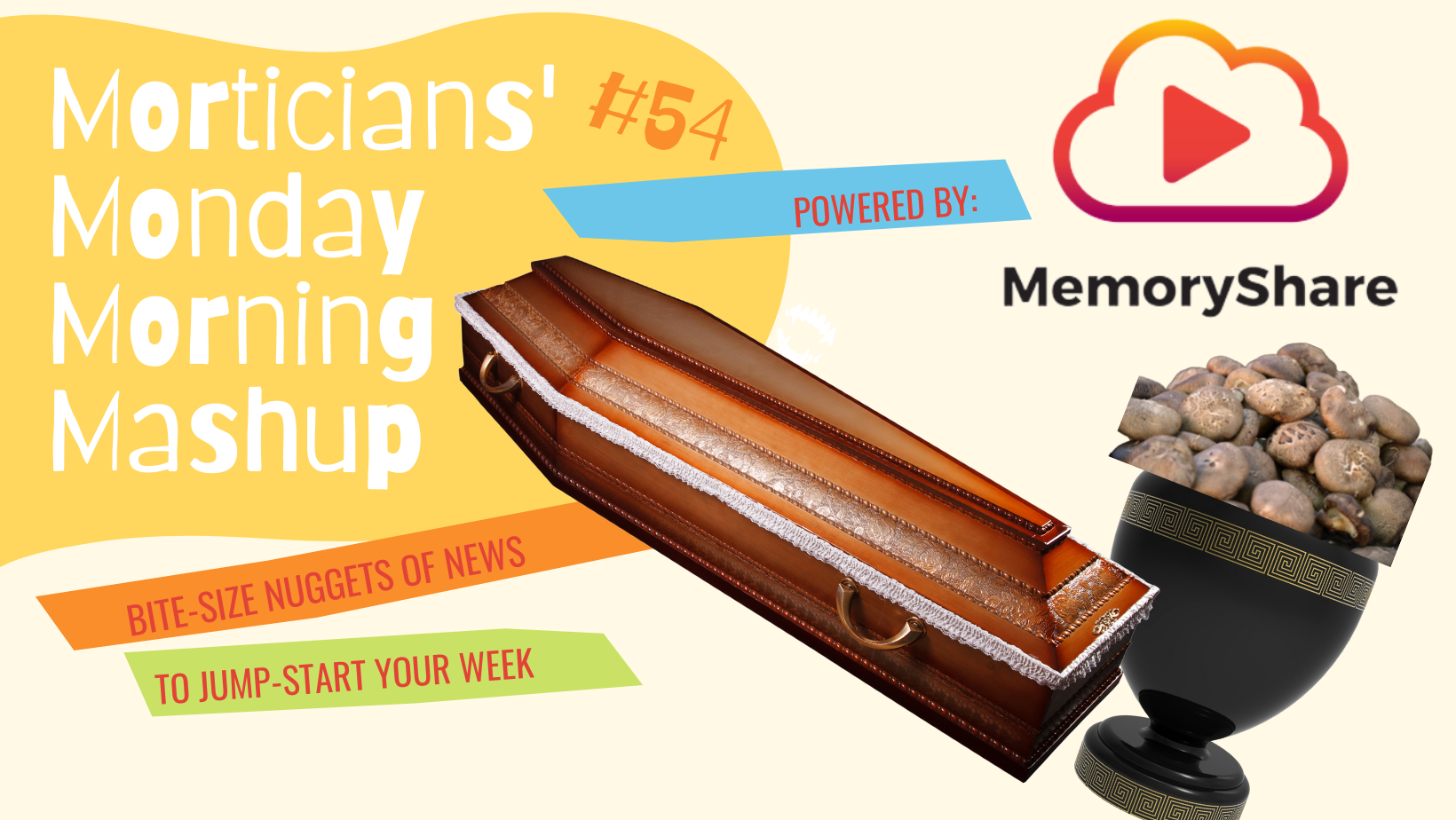 Welcome to the fifty-fourth edition of Morticians’ Monday Morning Mashup, 4M #54, where we’ll serve up bite-sized, easily-digestible nuggets of the deathcare news you need to crush conversations in the week ahead. Bon appetit!

California governor Gavin Newsom signed Assembly Bill 351 last week, paving the way for residents to choose natural organic reduction (NOR) beginning in 2027. California will join Washington, Oregon, and Colorado as the states leading the charge for NOR, which offers one of the greenest of green disposition methods. Alas, though, some folks aren’t excited about the new law. Among the most vocal opponents is the Catholic church, which likens NOR to “home gardening composting” and “reduces the human body to simply a disposable commodity.” The California bill, unlike others, doesn’t explicitly “ban the sale of the soil or its use growing food for human consumption,” which definitely doesn’t sit well with critics — especially the Catholic group, which worries that people could be “treading over human remains without their knowledge.”

A group called Death Without Debt delivered 120 cardboard coffins to members of the New Zealand parliament as a “reminder that every single day New Zealanders are thrown into poverty because government paperwork requirements leave them open to commercial exploitation.” Calling the current system “dysfunctional,” the group wants doctors and nurses to begin handling “pre-disposal paperwork” instead of leaving the task to funeral professionals, who charge “thousands of dollars.” The 120 protest coffins were filled with “briefing papers” with the biggest coffin reserved for the Prime Minister.

A mortician, restaurateur, and a pastor walk into a courtroom …

A Georgia man was sentenced to 29 months in prison for admittedly lying to receive emergency COVID-19 small business financial assistance through the CARES Act. Mack Knight reportedly posed as a mortician, a restaurateur, a tax preparer, and a pastor to apply for and receive $149,000 in funding — most of which he used to buy a Mercedes-Benz S-Class sedan. The car will be forfeited as part of his restitution.

First it was the mushroom suit, then the mushroom casket. Now, inevitably, the mushroom urn is a thing. A student at Estonian University of Life Sciences in northeastern Europe won a startup competition with his concept for a “robust, malleable mushroom-made material that regenerates when exposed to water.” The urn begins with a tiny bit of mushroom that’s cultured, germinated, and grown around an urn-shaped mold. The student, now a junior researcher at the college, expects to begin selling his urns later this year.

Now that Megan Hess and her mother Shirley Koch have pled guilty to mail fraud in the now-infamous Sunset Mesa body brokering crimes, victims and members of the general public are pushing for the maximum sentences to be served when the duo return to court on January 3, 2023. The women’s plea deals will limit their jail time to a maximum of 20 years each, and any sentence less than that, says a Colorado representative, will be a “slap in the face” to victims. “This is the largest body-snatching case in American history,” says Rep. Matt Soper, who after learning of the Sunset Mesa case, sponsored a bill that made the abuse of a corpse a felony rather than a misdemeanor. Soper is now “considering reforms to the Anatomical Gift Act to make information about how anatomical donations can be more transparent.”