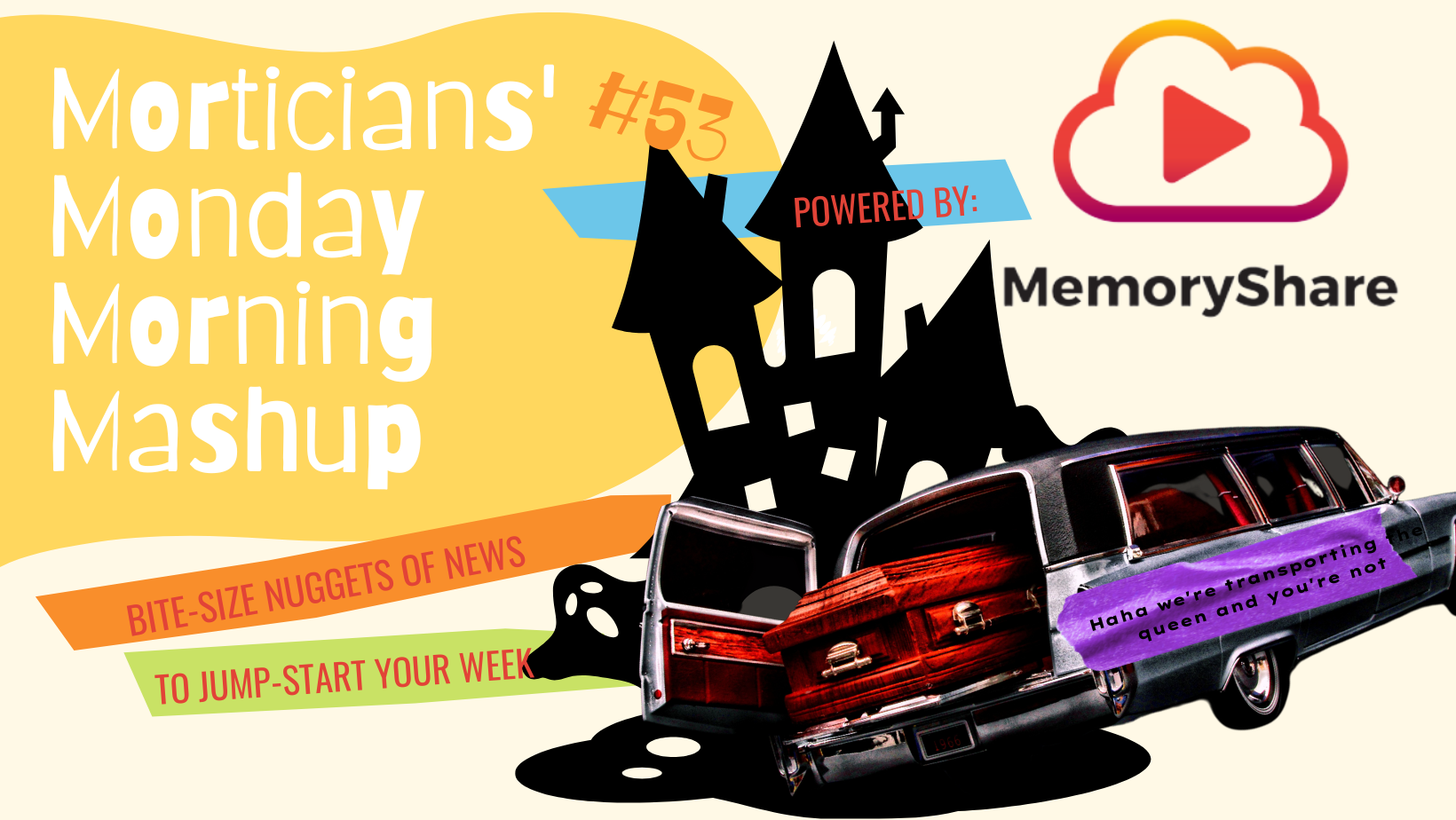 Welcome to the fifty-third edition of Morticians’ Monday Morning Mashup, 4M #53, where we’ll serve up bite-sized, easily-digestible nuggets of the deathcare news you need to crush conversations in the week ahead. Bon appetit!

A terrible oversight … or an egregious lie

Archaeologists in Tampa, Florida have confirmed that a building now housing a human resources consulting firm was built over 328 African American graves. The land was once known as St. Matthews Baptist Church Cemetery, and was sold in 1955 when the church couldn’t pay the “mountain” of fees being assessed by the city. According to reports, three businessmen agreed to take on the debt in exchange for the land, and promised to relocate the graves’ inhabitants. It’s now clear that never happened. It’s a horrible story, but one that’s not new to Tampa. In 2019, USA Today reported that 145 graves were found under a Tampa high school.

On September 14, Pisces, a self-described “sustainable deathcare startup,” launched its direct alkaline hydrolysis services in California, with plans to expand to other states in 2023. Like similar direct cremation services, Pisces offers “simplified” all-online arrangements that aren’t “laden with upselling or hidden fees.” Founder and CEO Christopher Taktak says that his concern over “‘profit over people’ sales methods and predatory practices” led him to create Pisces, which has an ethos that is “human-first, always, with a maximized customer service experience.”

“Cost of dying” drops in UK

The annual SunLife Cost of Dying Report is out in the UK, and for the first time since the insurance company began measuring funeral costs in 2004, the numbers showed a pretty significant decrease of 4.3%. Yes, that’s DEcrease, not INcrease. Of course, the drop is being attributed to scaled-down pandemic-era services, as 85% of respondents said COVID impacted the type of funeral they were able to hold. SunLife includes optional extras like catering, limos, and flowers in its total Cost of Dying in addition to basic cremation or funeral costs, which, by the way, were also down by 3.1%. Here are a few more interesting nuggets from the UK report:

Meanwhile in the UK, a fifth-generation family-run funeral home is being slammed for its “tasteless advertising” while transporting the body of Queen Elizabeth across Scotland. Apparently, the William Purves Funeral Directors sticker in the window of the hearse, shown above in a photo from Getty, drew the ire of enough royal admirers that the inquiries and complaints “overwhelmed and crashed” the business’ website. The sticker was removed during the journey, but the outfit was still called out on social media as “a tad crass,” shameful, and “utterly tasteless.”

This is the last time we mention the UK, we promise

So far in this 4M, we’ve covered the UK proper and Scotland, and now we bring you news from Northern Ireland, where funerals are “at risk of delay” unless laws “to ease the death management process are extended.” It seems that in Northern Ireland, a date for a funeral can’t be confirmed until a death notice has been registered. During the pandemic, special legislation allowed those notices to be filed electronically, but that law is slated to expire on September 24, and firms would have to go back to filing old-fashioned paper documents in person. England and Wales revoked their temporary electronic processes in March 2022 and have seen significant delays.

There’s an “eerie new series” coming to Discovery+ as part of the network’s “Ghostober” lineup, and the name pretty much says it all. We Bought a Funeral Home, which debuts on October 1, will “document the quirky journey of Heather and Arryn Blumberg and their two kids, Rafferty and Noa, who trade in big city life to buy, renovate and design a 12,000-square-foot, 1800s Victorian funeral home in the small town of Dresden, Ontario.” In a paltry six episodes, the family will “pull off this massive glam goth overhaul, wrought with strange shadows, frightening noises and a shocking discovery.” Can’t wait for Ghostober? Here’s the link to the YouTube preview.