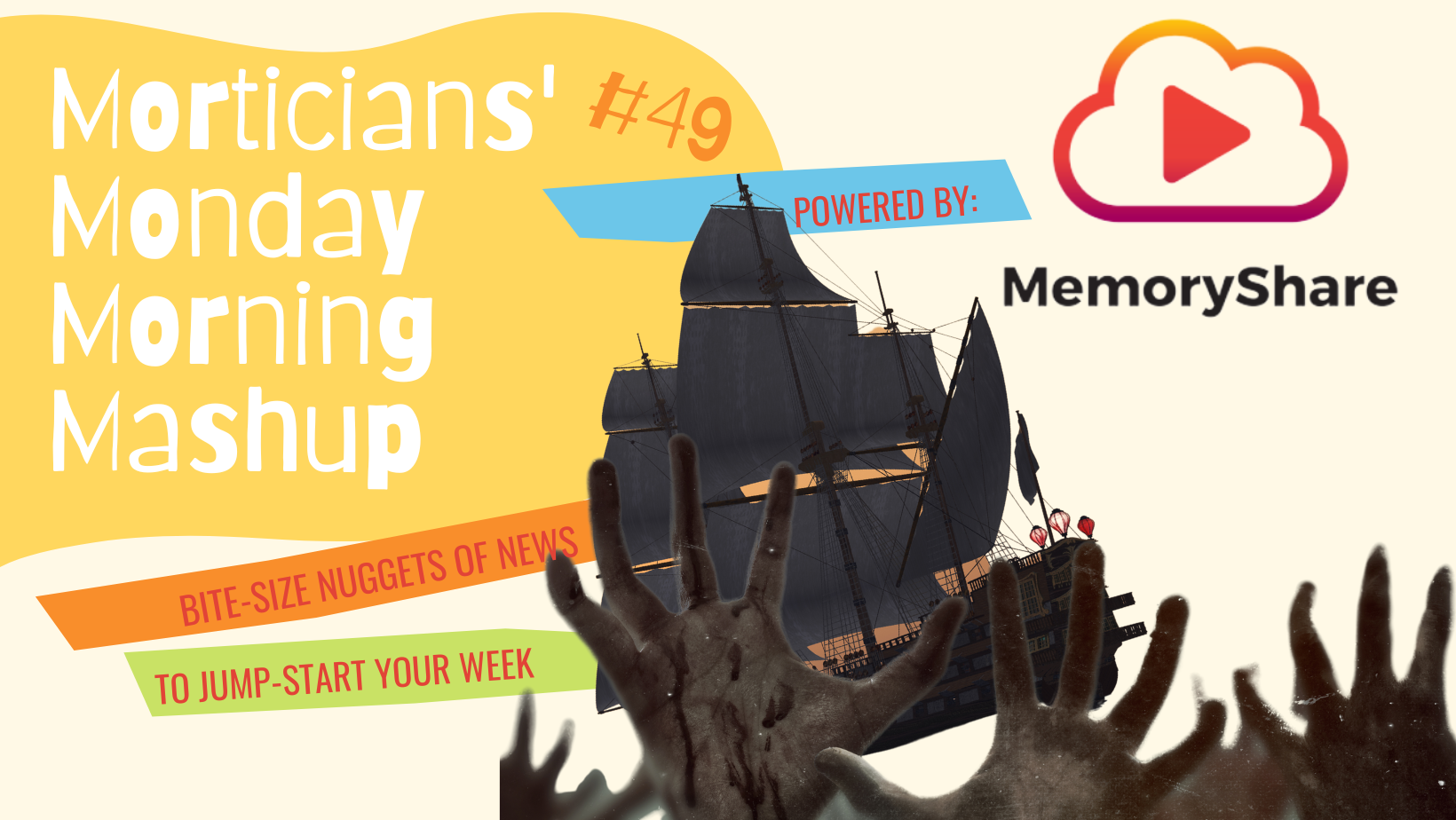 Welcome to the forty-ninth edition of Morticians’ Monday Morning Mashup, 4M #49, where we’ll serve up bite-sized, easily-digestible nuggets of the deathcare news you need to crush conversations in the week ahead. Bon appetit!

Conversations from beyond the grave

For those who thought the only way to speak to — and receive a reply from — a deceased loved one was to hold a seance, think again. Last week a deceased woman was able to answer questions in real time at her own funeral, thanks to new artificial intelligence (AI) technology created by her son. Stephen Smith used 20 cameras to film his mother answering 250 questions. He then fed the footage into software crafted by his company, StoryFile, to recreate an interactive holographic image. Earlier this year, the family of actor Ed Asner offered the same opportunities to those attending Asner’s funeral.

Just for ships and giggles

A Swedish engineer is trying to raise $3.3 million on IndieGoGo to construct “non-confessional” burial sites in Scandinavia, North America, and Europe. Dubbed “The Ship,” the proposed project would provide “an open sky and a nature that dwells the resting ground in silence and calm to the deceased and their relatives.” There’s little detail on the actual design of the spaces, except that they’d be built in a “deep forest or on a remote mountain plain.” There are still 58 days left to invest in this … well, whatever it is.

Who would have thought that the WNBA could be a recruiting ground for future deathcare workers? Sylvia Fowles is preparing to retire from her first career as the center for the Minnesota Lynx, during which she built an impressive resume, including four Olympic gold medals. For the last few years, she’s filled what spare time she had supporting a slew of community service projects, studying mortuary science, and working part-time in funeral homes in Minneapolis and Miami. In a wonderful recent interview for ESPN, Fowles explained her lifelong fascination with death and her intentions to open her own funeral home one day in Miami. She hopes it would be a place where she could remain behind the scenes preparing bodies rather than working up front running the day-to-day operations.

7 tips for the novice mortuary assistant

Not long ago, we shared in 4M the gaming world’s fascination with the deathcare-themed horror game The Mortuary Assistant. Apparently the game — in which players learn to embalm bodies that turn out to be possessed — has a growing following of folks who are eager to share their tips for a better gaming experience, including these gems:

Interestingly, some of these tips could actually apply to the real-life embalming experience. We’ll let you decide which ones.

A Pennsylvania funeral director was suspended and fined in October 2021 for an infraction that dates back to 2009. He was found to have engaged in unprofessional conduct by failing to bury a deceased woman’s cremains in Arlington Cemetery next to her husband. There’s no explanation why this story was just shared in the press in August 2022, or why there was such a long span of time between the incident and the State Board of Funeral Directors’ order, but it does go to show that families, and in some cases, the law, never forget.

A well-used Mall of America wedding chapel is closing its doors after 8,000 ceremonies in 28 years, but instead of retiring, the chapel’s owner — who is also an ordained minister — is thinking about putting her skills to use in a new line of work. “I’m kind of looking into the funeral business,” owner Felicia Glass-Wilcox told a Minnesota newspaper. “You are planning an event. It can’t be that different.” After all, how hard could it be, right?