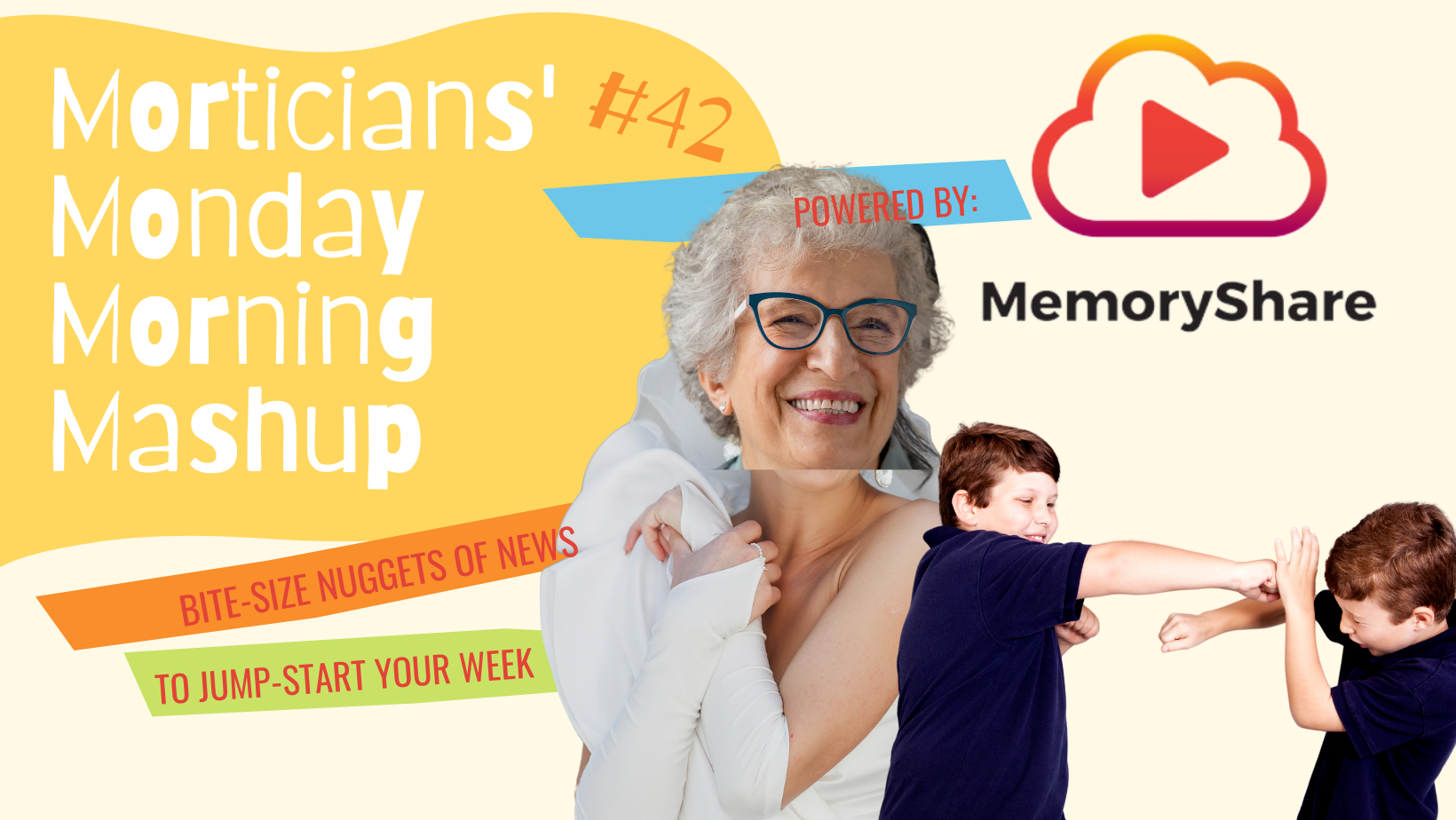 Welcome to the forty-second edition of Morticians’ Monday Morning Mashup, 4M #42, where we’ll serve up bite-sized, easily-digestible nuggets of the deathcare news you need to crush conversations in the week ahead. Bon appetit!

Two honorable burials and a dishonorable disinterment at Arlington

Arlington National Cemetery’s 426 acres are the final resting place for more than 400,000 men and women, including President John F. Kennedy and astronaut John Glenn. On June 17, one of the original Tuskegee Airmen joined their hallowed ranks. A cadre of distinguished guests and military brass joined family members as they bid farewell to Brigadier General Charles McGee, who died in January at the age of 102. McGee was an Air Force legend, having flown in more than 400 missions over three decades and three wars.

Another World War II veteran was laid to rest in Arlington in June — 78 years after his death. Twenty-year-old Army Private First Class Morris Swackhammer was killed in action in France in 1944. When his body was exhumed from its impromptu battlefield burial place over a year later, he couldn’t be identified, and thus became known as X-756. He was reburied in an American cemetery in Belgium, where he remained until 2020, when his remains were once again exhumed and shipped to Nebraska for DNA testing. His true identity was revealed on June 28, 2021, and on the same date in 2022 his family buried him — for good this time — in Arlington Cemetery.

One the opposite end of the honorable spectrum is Andrew J. Chabrol, a former Navy officer who was buried in Arlington in 1993 — after being executed by the State of Virginia for the brutal rape and murder of a female sailor. The deceased sailor’s family and a group of dedicated veterans have campaigned for Chabrol’s removal from Arlington for years, setting up a Change.org petition and later appealing to legislators for assistance. In late June, California representative Jackie Speier submitted a proposed amendment to the annual defense budget that would require Arlington to disinter Chabrol’s remains and empower the Army and Veterans Administration to review cases where veterans who committed capital crimes were buried in national cemeteries.

An astonishing assault in Australia

We’re (sadly) accustomed to funerals erupting into arguments and fistfights among emotional family members. In most cases, it’s the level-headed funeral directors who restore peace. Recently in Sydney, Australia, though, roles were reversed, as two funeral directors became involved in a “wild brawl,” throwing punches and hurling insults as families and a priest looked on in shock and horror. Apparently, the two men, who represent different funeral firms, arrived at Rookwood Cemetery at the same time, each followed by a procession. An argument that began as they both tried to check in at the cemetery office escalated, and one of the men was arrested and charged with assault.

More bad news for the Bernards

Once again, R. Bernard Funeral Home, the family-owned Memphis, Tennessee establishment that was featured in the Netflix reality show “Buried by the Bernards” in 2021, is in the spotlight for the wrong reasons. The Tennessee Board of Funeral Directors has fined Bernards $500 for not submitting required reports for three years running and also for letting fees go unpaid for two years. Earlier this year the state fined Bernards more than $7,000 for allegedly mixing up the cremains of two individuals. You have to wonder if these debacles will hurt their chances of a second season on Netflix. Who knows … These “adventures” might actually help them create a more drama-filled show.

A wedding and a funeral

A boutique owner has gone viral on TikTok with her story about a frantic groom who recently begged her to reorder his fiance’s wedding gown — because the original was buried six feet underground. It seems the future bride gave her dress to her mother for safekeeping until the wedding; the mother stored it in a seldom-used closet. When the bride’s grandmother died two weeks ago, her mother sent the bride’s brother to get grandma’s wedding dress out of the closet so the grandmother could be buried in it; after all, the family had buried the woman’s husband in his tuxedo and wanted to bury grandma accordingly attired.

Unfortunately, the brother fetched the wrong wedding dress from the closet and dropped it off at the funeral home. Since the grandmother’s service featured a closed casket, no one noticed that she was being buried in her granddaughter’s perfectly-altered gown. It was only when the mom went to the closet that she realized her son’s error. The boutique owner is working to get another dress, but in the meantime she’s probably enjoying her popularity on TikTok and the hilarious comments her video is garnering — like these:

We know there are plenty of good, bad, and ugly dramas and reality shows about deathcare, but leave it to public broadcasting to showcase the most historic, breathtaking, and storied cemeteries across the globe. The visually stunning and history-rich PBS show “World’s Greatest Cemeteries” is currently filming its second season, which will feature Cave Hill Cemetery in Louisville, Kentucky in one of its fall episodes. In each episode, host Roberto Mighty digs deep into one cemetery’s history and notoriety, speaking with historians and expert guests, exploring the grounds, and introducing dramatic reenactments of various cemetery-related happenings. For example, in Season One’s second episode featuring London’s Highgate Cemetery, Mighty presented segments on the meaning of Victorian-era grave monuments, Britain’s WWI BIPOC war heroes, 19th century London grave robbers, and cemetery landscape architecture. What a great way to laud cemeteries and the deathcare professionals who care for them!

Remember Andrew Scheid, the former Pennsylvania funeral director who was charged in 2020 with mishandling bodies at his eponymous Lancaster County funeral home? In October 2021, Scheid pleaded guilty to four counts of abuse of a corpse and no contest to lying on death certificates. He was sentenced in November to 3 to 12 months in prison followed by house arrest, and was released in February. Last week Scheid was found deceased in his car, which was parked in the lot of a Lancaster County store. An autopsy revealed the 51-year-old Scheid died of natural causes.

There’s no pause button for grief

A Canadian college professor and medical anthropologist provided one of the best statements yet about how families are dealing (or not dealing) with COVID-delayed memorial services. Mary Ellen Macdonald, Associate Professor of Dental Medicine and Oral Health Sciences at McGill University in Montreal explained this unique consideration of grief in this way:

“While the pandemic has increased the numbers of grievers, it has not fundamentally changed grief. Language suggesting that mourners have ‘paused’ or ‘suspended’ their grieving in the pandemic misrepresents their experiences. Certainly, mourning practices have been interrupted in the pandemic – grief has not. Grief is ongoing; it’s under, in, through our lives. It does not ‘close’ after a funeral. The message that a funeral is needed to ‘un-pause’ grief, or to bring ‘closure,’ reproduces unhelpful messages. Grievers are already surrounded by stigma (e.g., that grief should not be seen in public spaces; that grief should follow linear stages). While honouring the dead and celebrating a life (such as through a funeral or shiva) will always be important, suggesting that a delay ‘suspends’ or puts grief ‘on pause’ is too simplistic to be helpful.”