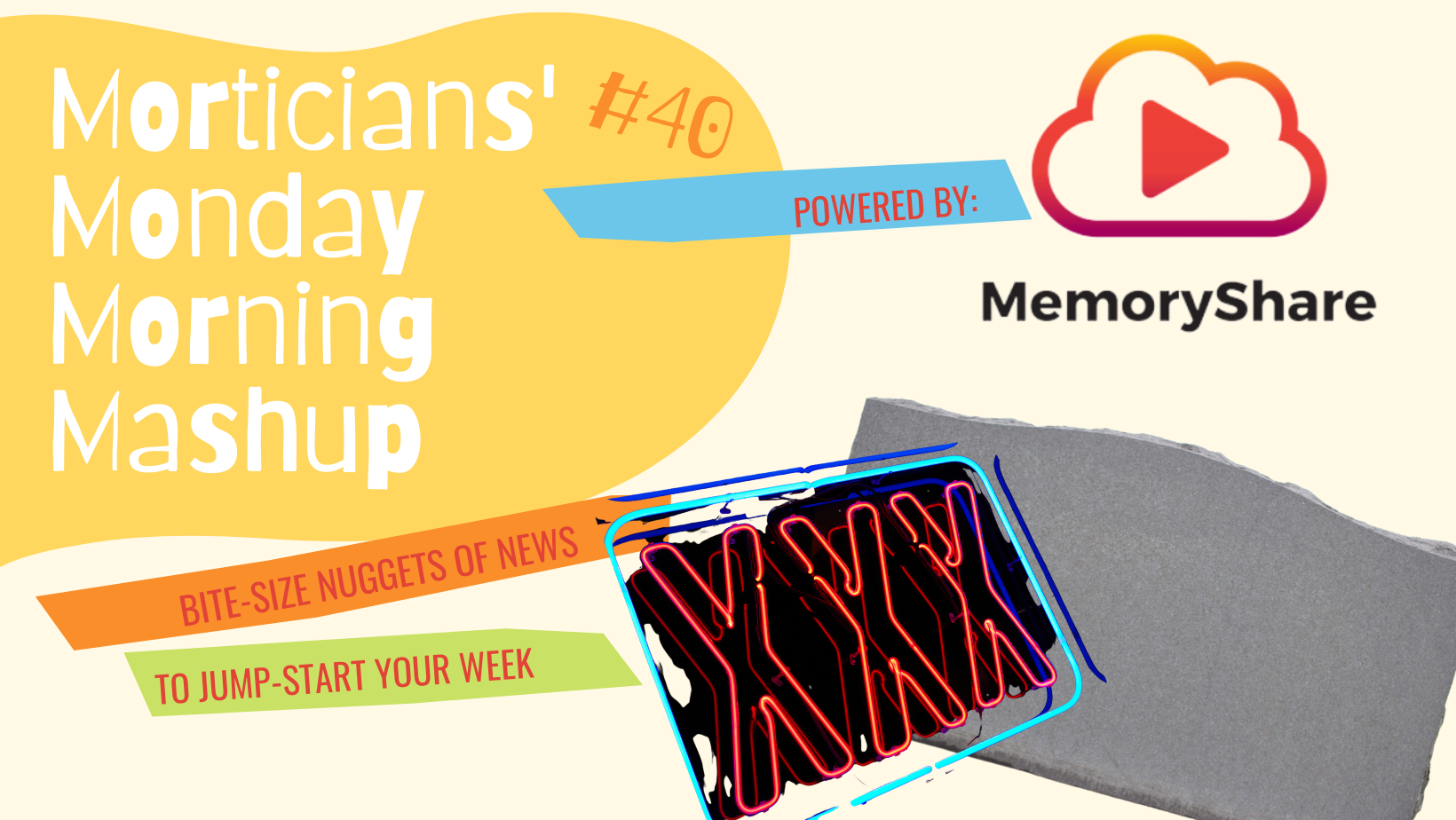 Welcome to the fortieth edition of Morticians’ Monday Morning Mashup, 4M #40, where we’ll serve up bite-sized, easily-digestible nuggets of the deathcare news you need to crush conversations in the week ahead. Bon appetit!

This past week found several folks in the funeral industry on the wrong side of the law due to licensing oversights, financial offenses, and an ongoing body brokering drama that really just needs to end already (with jail time, hopefully). These accounts are never fun to report, but as we’ve said many times, maybe reading about another deathcare worker’s mistakes could keep someone from making the same error. So, with no further ado, here you go:

Spitting in the face of decency

A Texas woman who held a grudge against a family mourning the loss of a loved one last November walked into a funeral home during the viewing and spit on the corpse. She was arrested this month and charged with state-jail felony abuse of a corpse. Perhaps she didn’t realize that Texas lawmakers beefed up the penalty for abusing a corpse from a misdemeanor to a felony in 2017 after finding eight decomposing bodies in caskets in a local funeral home. Gotta love Texas justice.

Several members of the deathcare profession were featured in an NBC News story published on June 14 on the extremely relevant subject of gun violence. For the article, entitled “Morticians describe the devastating toll assault-style weapons inflict on bodies,” reporter Melissa Chan spoke with Hari Close, funeral director and owner of Hari P. Close Funeral Services in Baltimore, Monica Torres, owner of NXT Generation Mortuary Support, and Dominick Astorino, a mortuary science professor at Worsham College and Wayne State University. Together, they told the story of the devastating repercussions of death from assault weapons, from the challenges of reconstruction to the emotional trauma of a viewing without an open casket. We applaud Close, Torres, and Astorino for their willingness to participate in the story, which we can only hope is read by the people who need to hear it most.

Rumors have been swirling about the health of Russian dictator Vladimir Putin since he began the horrible invasion of Ukraine in late February. His legs appeared to buckle beneath him during a recent ceremony, he shook uncontrollably during a meeting in February, and he reportedly needed “urgent medical assistance” after falling ill following a phone call with his military chiefs. Some believe he has cancer, while others pin his symptoms on a Parkinson’s disease diagnosis. Whatever the case, a UK professor believes Putin is using Botox to mask whatever medical issues his face might otherwise show. Last week, war studies professor Michael Clarke of King’s College in London said he believes the 69-year-old Putin was “embalming himself while he’s still alive” by “hitting the Botox heavily.”

We know you guys wear a lot of hats, but “bank owner” usually isn’t one of them. However, that might become the newest title for some of the members of the Funeral Directors’ Association of South Africa (FUDAS). At last week’s FUDAS conference, delegates were challenged by keynote speakers to join together and purchase UBank, or buy a 50% ownership stake in the struggling African Bank they’d “have a voice and be decision-makers” in the “entire value chain of the businesses” and “not only be buyers of the products they use.” In this vein, delegates were also urged to consider getting into the timber industry “so that they are a part of coffin manufacturing.”

So, you’ve probably seen — or at least heard about — the Iowa man’s headstone that’s causing a stir for its “hidden” message. The family of Steven Owens, who died in September at the age of 59, thought spelling out “F- – K OFF” with the first letters of a series of nice phrases would be the perfect inscription for someone described as “sassy,” “fun-loving,” “endearing,” and “easily fired up.” Owens’ daughter said cemetery managers “took issue” with a drawing of the headstone, but the company that created it said only a court injunction would have prevented them from installing it. Since the stone was placed on the grave several weeks ago, one person has submitted a complaint to a local news outlet. Owens’ daughter’s reply? “If you don’t like it, walk away.”

Coming August 2 from Darkstone Digital: The Mortuary Assistant, a first-person horror video game that “puts you in the shoes of Rebecca Owens, a recent Mortuary Sciences grad who’s starting an apprenticeship at the spooky River Fields Mortuary.” Sound good? Well just wait. There’s more. “As a mortuary assistant, you have duties to perform. Namely, making incisions on the dead, pumping their remaining blood out, retrieving them from the cold storage, and conducting embalmings.” As you play, you hunt for clues, “brave dark hallways,” and pay attention to details, because that’s the only way you’ll “walk away with your soul intact” (insert creepy horror movie cackle here). So exactly how close does this description come to your actual day at work in the embalming room? Inquiring minds want to know.

Please don’t let this be a new film genre …