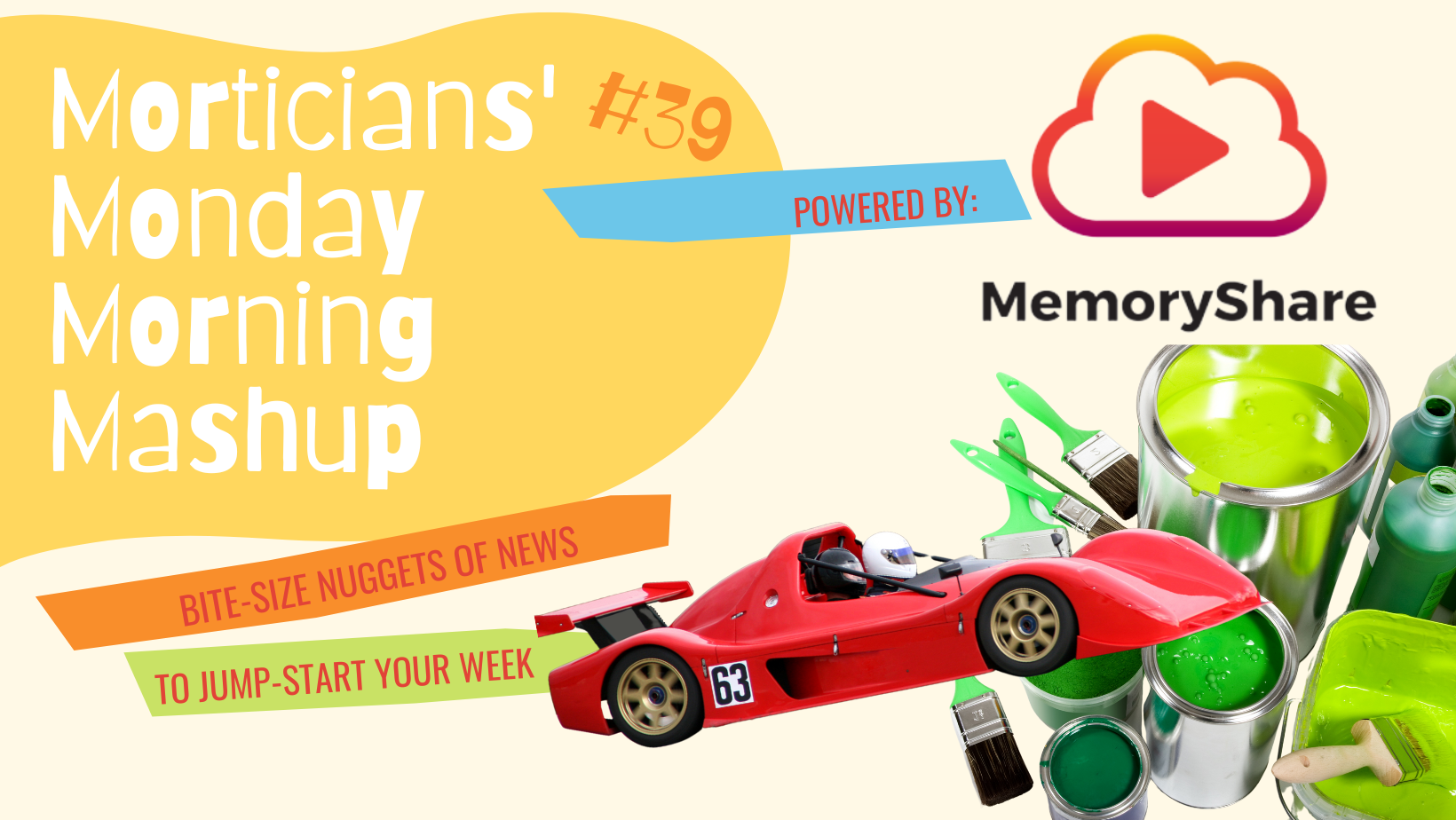 Welcome to the thirty-ninth edition of Morticians’ Monday Morning Mashup, 4M #39, where we’ll serve up bite-sized, easily-digestible nuggets of the deathcare news you need to crush conversations in the week ahead. Bon appetit!

Safe Hands is — well, was — a preneed provider in the UK; however, it’s not one of the 28 that’s currently registered with the Funeral Planning Authority (FPA), a body that has been regulating prepaid funeral plans since 2002. Safe Hands “collapsed” and went into administration after another UK entity, the Financial Conduct Authority (FCA), announced they would start regulating firms that provide and arrange prepaid funeral plans beginning July 29. Basically, Safe Hands didn’t meet the FCA’s solvency requirements … and the FCA isn’t pulling any punches.

The FAQ page that has replaced Safe Hands’ website states that Safe Hands’ assets are “significantly lower” than their liabilities, that customers’ money was used by the company to acquire “complicated” investments that are under investigation, and that the company is in no position to enable refunds in full. An FPA- and FCA-approved company, Dignity Funerals Limited, is helping these customers, but only on a temporary basis. In the meantime, the FCA is “strongly” advising consumers not to do business with two additional preneed companies, Empathy and Unique, because they have either not applied for FCA authorization or their application was withdrawn or refused.

Even though this is happening across the pond, it’s always difficult to hear about any deathcare company letting down its customers. Additionally, no one wants to see that the 35-year-old millionaire owner of Safe Hands was racing “supercars” in a competition that pairs “rich enthusiasts” with professional drivers, while his company was about to leave 47,000 customers with no refunds and few options.

New York’s state legislature has passed a bill allowing natural organic reduction (NOR), or human composting. If the governor signs the bill into law, New York will become the fourth state to allow NOR, which saves an estimated metric ton of carbon dioxide compared to burial or flame cremation.

Veterans in the spotlight (as they should be)

Just two weeks ago deathcare professionals across the country observed an appropriately solemn and respectful Memorial Day, recognizing those soldiers and sailors who made the ultimate sacrifice for our freedom. Sadly, many Americans tend to put veterans on the backburner until November’s Veterans Day temporarily puts them back in the forefront. But this week we’ve found lots of good news for veterans and the families and communities who care about them:

Yeah, you guys probably knew that nonprofit funeral homes were a thing (there are a handful of them in the US), but it wasn’t until I read this story about one of Australia’s not-for-profits that I learned it was actually a thing. The recently-launched Tender Funerals in New South Wales is the area’s first such entity. Tender is “community-based, not-for-profit organization and registered charity” that “makes funerals more affordable and will provide more choice.”

Word of the day: Greenwashing

Our friends at the Green Burial Council do some amazing work promoting and supporting eco-safe disposition. But did you also know that combating “greenwashing” is a huge part of the GBC’s mission? According to Merriam-Webster, greenwashing refers to “expressions of environmentalist concern especially as a cover for products, policies, and activities.” The GBC’s anti-greenwashing initiative works to identify and certify the deathcare organizations that are truly “green” according to the GBC’s criteria — criteria created after intensive research and with the help of trusted agencies, including the Federal Trade Commission. Keep up the good, green work, team GBC!