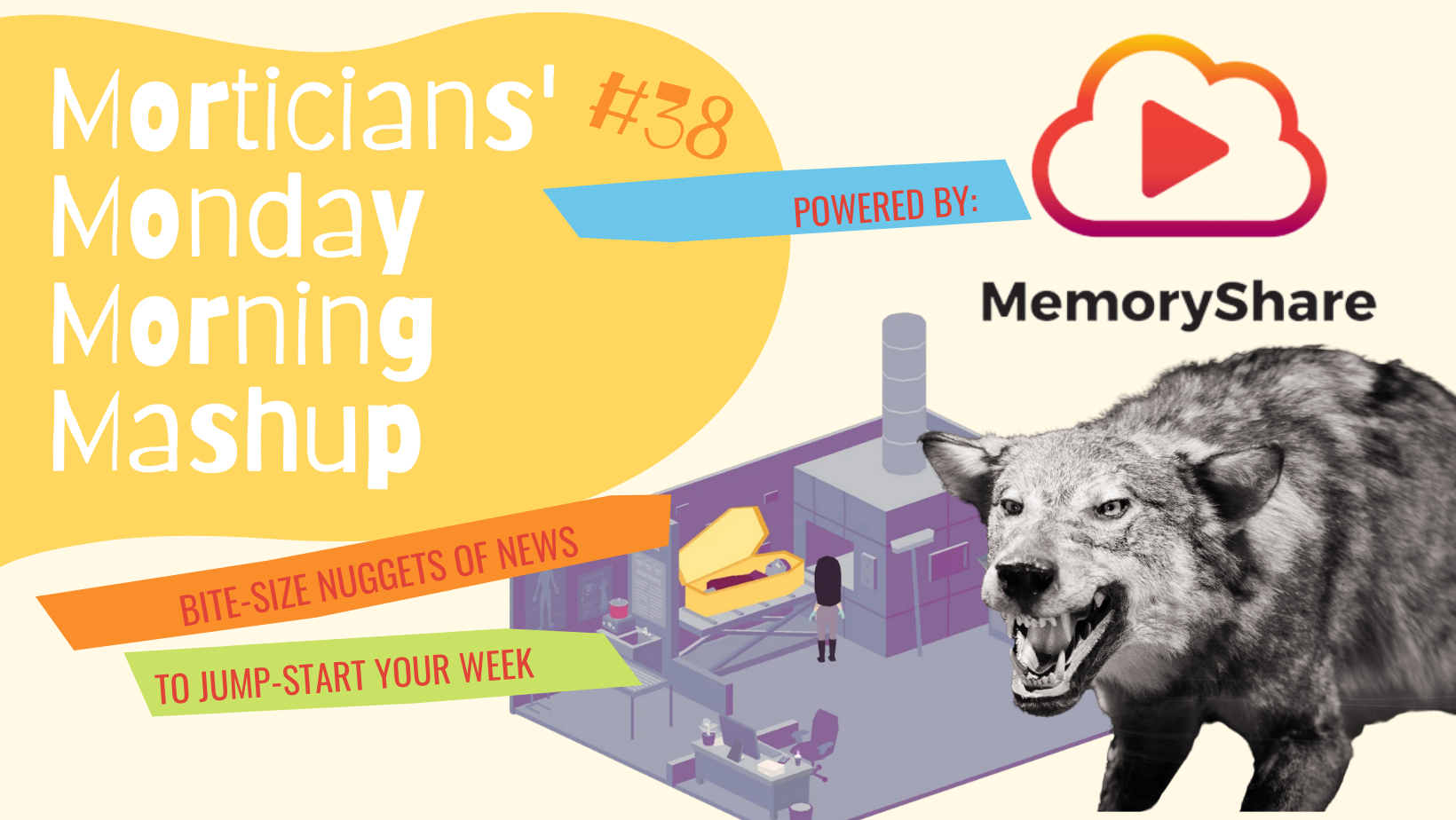 Welcome to the thirty-eighth edition of Morticians’ Monday Morning Mashup, 4M 38, where we’ll serve up bite-sized, easily-digestible nuggets of the deathcare news you need to crush conversations in the week ahead. Bon appetit!

What is going on here?

Recent events have put gun issues front and center in our national spotlight, and we can’t help but recognize a concerning and growing trend of shootings occurring at cemeteries. Just this past week two people were shot while attending a funeral in a Wisconsin cemetery . . . a funeral for a person who was shot by police during a traffic stop. On May 22, a man was shot to death at a California cemetery. A man was shot and killed in a Washington cemetery in April following a dispute. In April, a juvenile was arrested for the shooting and killing a man in a Texas cemetery. In March, police in Tennessee shot a man in a cemetery after he threatened cemetery workers with a knife. Also in March, two men were found fatally shot in a North Carolina cemetery. In February, a woman was found inside a Virginia mausoleum with a fatal gunshot wound.

We could go on, but we don’t want to. Yes, cemeteries are places that heighten emotions and yes, they can provide quiet, covert locations for illicit activities. In fact, a Boston cemetery manager last week lamented an unfortunate uptick in gang activity on his grounds. But where is the respect for the deceased, the families who love them, and the people who work at these sites? What can the deathcare community do to stop this from happening?

On a much (MUCH) more positive note, we’d like to call out the folks at Mountain View Funeral Home in Mesa, Arizona for their efforts in honoring veterans — the living as well as the deceased. Mountain View’s cemetery is the final resting place for more than 3,000 veterans, and on Memorial Day the funeral home’s staff places flags on each and every one of their gravesites. In addition, they use this holiday as the impetus for a hygiene and clothing drive every year for distribution to homeless veterans. Way to go, Mountain View!

We’d also like to recognize Cleveland Funeral Service and Crematory in Shelby, North Carolina for their efforts in pairing retired American flags with deceased veterans. Funeral director Marty Lockridge collects retired flags from his community and encloses one in the casket of each veteran prior to cremation. He also attaches a piece of the flag to a certificate he presents to the family. Kudos to Marty and Cleveland Funeral Service!

Last week we shared how deathcare professionals in Texas and beyond were stepping up in extraordinary ways to help the Uvalde community, but this story came out after we published and we definitely wanted to share it with you all. In yet another awe-inspiring demonstration of the incredible generosity of folks in the business, family-run SoulShine Industries of Edina, Texas donated 19 custom caskets for the school shooting’s young victims. Owner Trey Ganem and his 15-year-old son designed and hand-painted the caskets after meeting with family members of each child, and worked tirelessly to assemble and deliver them in time for the funerals. Designs ranged from sports to a Spiderman themed casket “In Loving Memory of Bubba.”

The caskets cost between $3,400 to $3,800 to make, and Ganem covered the majority of the costs. Here’s a wonderful video where Ganem describes his gesture and displays a few of these precious works of art.

MUST READ: Remember the embalmers

If you haven’t seen this op-ed in Baptist News Global written by thanatologist Harold Ivan Smith about the heartwrenching task of embalming children, please take a moment to read what he has to say. It’s well worth your time.

$445K may be penalty for cremating a Catholic man

A Catholic woman suing Los Angeles County for cremating her son in 2019 without her permission may receive a $445,000 settlement if the county decides not to go to court. Authorities found the decomposed body of the 33-year-old in a black trash bag off a freeway and ruled the death a homicide from stabbing. The victim’s mother alleges that even though her son’s identification was found on his body, authorities did not notify her before cremating his remains. She learned of his death and disposition after a two-month search for her son, and now “agonizes over whether she will see him in the afterlife” since her religious beliefs were violated with the cremation.

ICYMI, a video game called A Mortician’s Tale debuted in 2017. It is literally a video game about running a funeral home.

The App Store describes it this way: “A Mortician’s Tale is a story-driven death positive video game where you play as a mortician tasked with running a funeral home. Take on the role of recent funeral direction graduate Charlie as she learns the ropes of the business and industry. Prepare the bodies of the deceased (via embalming or cremation), attend their funerals and listen to their loved ones’ stories, and interact with Charlie’s coworkers, clients, and bosses.”

What brings this game to our attention today, five years after it was introduced? It showed up in a release about a bundle of games created by queer developers in honor of Pride Month. Although we first shared news of this game in 2016 before it hit the stores, we thought it was worth mentioning again. Just in case you want to go home after a hard day at work and play a video game about what you just spent most of your day doing.

Wolf is not happy, and we get it

“Autopsy: The Last Hours Of …” is a documentary-style show on Reelz that scrutinizes celebrity deaths. Dr. Michael Hunter, a medical examiner, hosts. In their 11 seasons, they’ve reviewed the deaths of everyone from Kurt Cobain to Rodney King, but the subject of an upcoming episode is making folks question the ethics of the show. A few days ago Reelz announced that the show would take on the death of legendary guitarist Eddie Van Halen, who died from cancer in 2020. Upon learning of the news, Van Halen’s son Wolfgang tweeted some choice words about the show, everyone who makes it, and anyone who watches it, saying that it’s “disgusting trying to glamorize someone’s death from cancer. Pathetic and heartless.” Based on the post’s 6,095 likes, it seems a lot of folks agree.