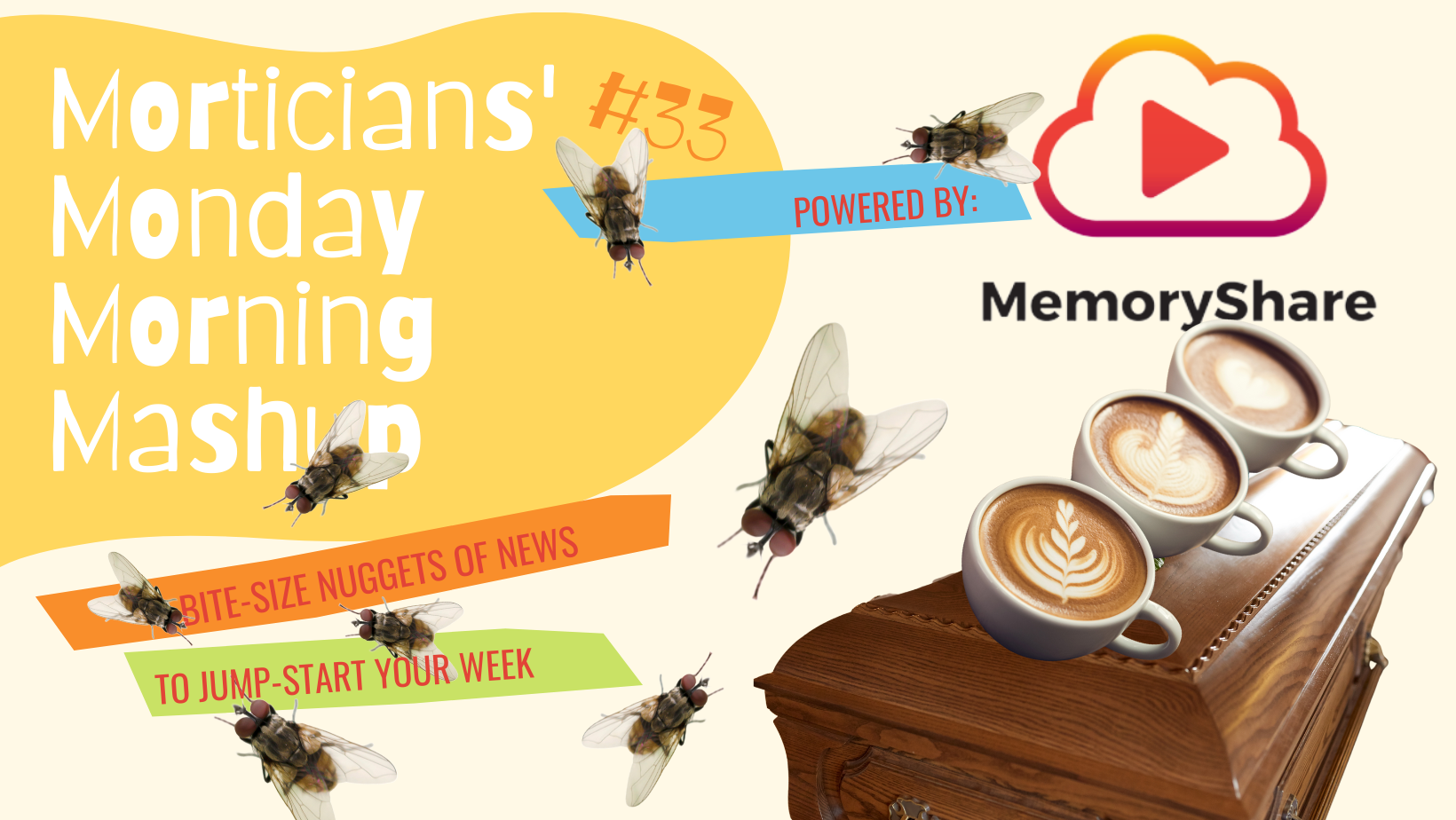 Welcome to the thirty-third edition of Morticians’ Monday Morning Mashup, 4M #33, where we’ll serve up bite-sized, easily-digestible nuggets of the deathcare news you need to crush conversations in the week ahead. Bon appetit!

They came and snuffed the rooster

The city of Ocean Springs, Mississippi is in mourning for a beloved friend who was known to hang out downtown and greet visitors. A few weeks ago, Carl went missing. The last time he was seen alive was at 3 a.m. last Sunday, when a woman and a group of men were recorded on surveillance video talking to him; the woman was recorded holding Carl and walking down the city’s main street. Tragically, the town would soon learn that Carl had been murdered — allegedly by the woman in the video. The woman, who was visiting from a neighboring county, has been charged in his death, and was subsequently fired from her job as a county juvenile corrections officer.

In the meantime, the community is preparing to lay Carl to rest. Memorials are popping up all over town, and Bradford-O’Keefe Funeral Home has partnered with In Memory Caskets to donate a special receptacle for Carl.

Residents are also planning a special New Orleans-style second line funeral for him. A second line funeral is a lot like a parade in which a “second line” of marchers follow the first line — the hearse, funeral directors, immediate family, etc. — in a procession to the decedent’s final resting place. Along the way, the mourners strut down the street to celebrate the deceased’s life with a marching brass jazz band, bright colored clothing, and the like.

Carl was a legend who will not soon be forgotten by the Ocean Springs community. We can’t exactly say he was irreplaceable, though. If you haven’t figured it out yet, Carl was a rooster. A handsome, charismatic, reliable one, but still … a rooster. And technically, Carl was named “Carl 2.0.” His predecessor was actually the first to “peck his way down Government Street,” according to the local news outlet.

Can’t lie when there’s a swarm of flies

Complaints about Mark B. Allen Mortuary’s treatment of deceased loved ones started rolling in years ago. A state investigation kicked off in 2020, and an inspector twice noted (but did not issue citations for) problems with body storage units and “rotting” smells. It wasn’t until investigators visited the Sun Valley, California establishment in 2021 that they realized the extent of the facility’s issues. They were greeted by a “swarm of flies circling the property” and immediately noticed a “foul and overwhelming” odor of decomposing bodies emanating from within. Inside they found at least 11 deceased victims of the facility’s neglect; bodies in various states of decomposition, and some were not properly identified. The owner, Mark Bruce Allen, has been charged with 22 misdemeanors, and has reportedly left the state — without his license, by the way; it was revoked several months after the April 2021 encounter with the insects.

A Rapid City, South Dakota funeral home has added a new member to the team. Her name is Remi and she’s reportedly from good stock: He’s ¼ golden retriever and ¾ poodle. Ken Kirk, cofounder of Kirk Funeral Home, believes Remi’s heritage will be an asset. “The golden retriever has good people intuition,” said Ken Kirk, co-founder of Kirk Funeral Home. “Poodles are very intelligent so we’re hoping that the combination will work well and as I have observed children just love her to pieces.” He reports that Remi’s presence has already made a difference in the feel of the funeral home, providing a warm and welcoming first impression. We applaud the Kirks for stepping outside the comfort zone of traditional deathcare and exploring new ways to care for families and visitors!

It’s a match made in … a cemetery (in a few ways, that’s pretty close to heaven). A Kentucky community college is partnering with a historic local cemetery to provide students instruction on masonry cleaning, conservation, safety, and maintenance. I mean, where else would these kids find such a wide variety of stone monuments, markers, and statuary — and where else would a cemetery find such motivated and skilled labor? The 10-week exercise in Louisville’s Cave Hill Cemetery, which was established in 1848, is offered by Jefferson Community & Technical College. Cemetery owners and managers: Is there a similar masonry instruction program near you? You can read more about the program here; maybe it’s something you could introduce in your town!

As green as green can be

An end-of-life specialist and a mortician have teamed up to open Vermont’s first forest for natural burials, seven years after the state passed laws allowing these greenest of grounds. The 60-acre Vermont Forest Cemetery plot that co-founders Michelle Acciavatti and Tim Graves selected is filled with oaks, pines, and varieties of birch trees. Although some locals have raised concerns, the owners hope to be approved by the local board to open for their first interment soon. In the meantime, Acciavatti has held information sessions about green burial and cremation at libraries throughout the state, and was instrumental in getting a bill passed that changed the required minimum burial depth from 5 feet to 3.5 feet underground.

Even IKEA hasn’t thought about this DIY furniture

A 27-year-old Philippines funeral home operator looking to open a second location found the perfect parcel of real estate near a hospital in the city of Bacolod. There was only one catch: The land owner would only sell him the property if he agreed to take a few extra vacant spaces as well. He agreed and bought the property in its entirety. It didn’t take long for the hospitality management major to decide to use his extra space to open a coffee shop — and he definitely went with a familiar theme. The Coffin Break Bistro is furnished with caskets that have been refurbished to serve as tables and seating. According to a local news outlet, the “concept killed,” (haha). After only one year in business, the owner has opened a second location and is “dead serious” (also haha) about opening a third.