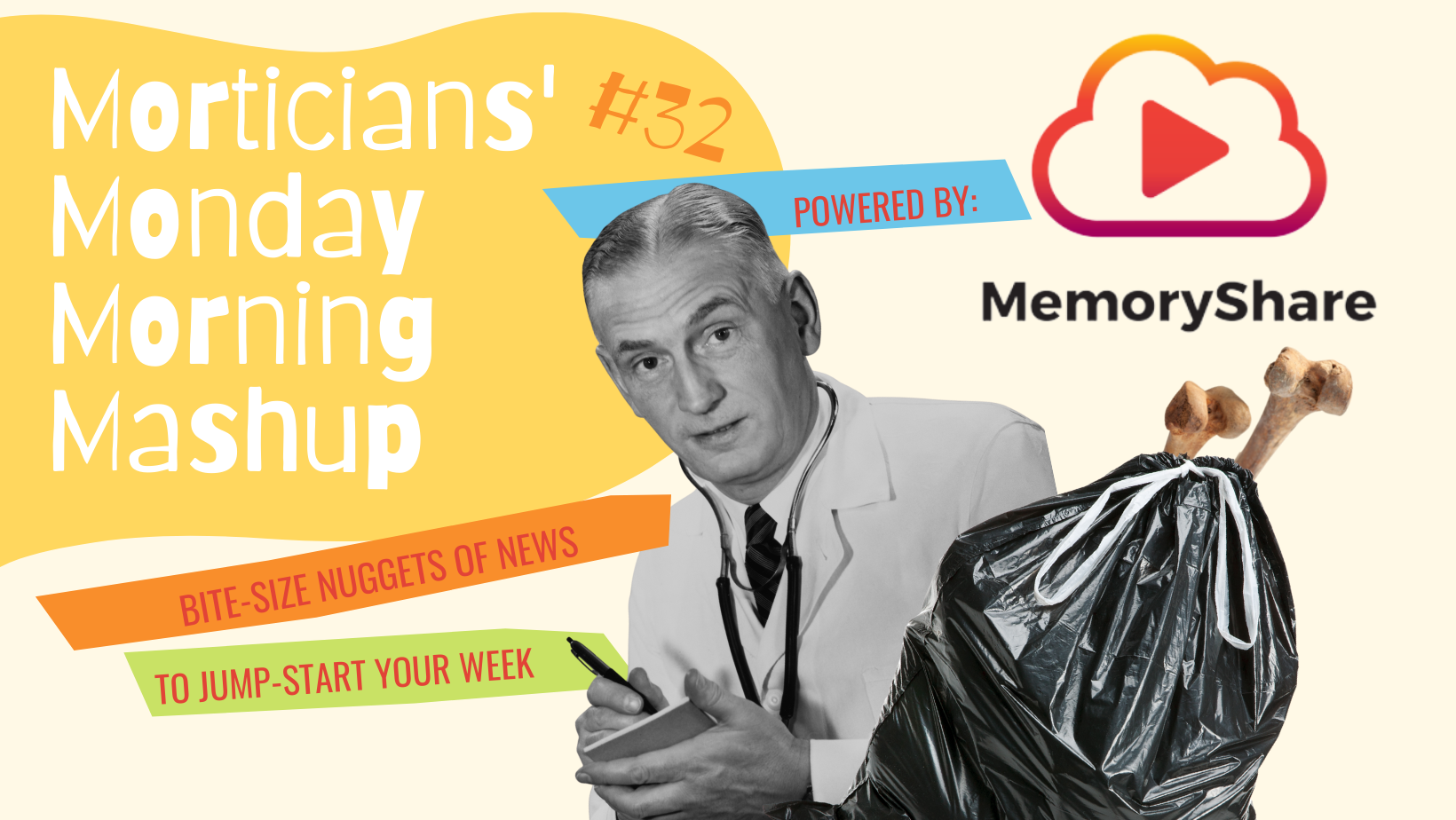 Welcome to the thirty-second edition of Morticians’ Monday Morning Mashup, 4M #32, where we’ll serve up bite-sized, easily-digestible nuggets of the deathcare news you need to crush conversations in the week ahead. Bon appetit!

A different kind of DeathTok

A 92-year-old Connecticut grandma has gone viral on TikTok for reading the rules for her funeral. @Grandma_Droniak (her TikTok handle) garnered 31 million views for her post, which include rules such as:

Bertha, it seems, was “cut out” of Droniak’s life a long time ago because Bertha was “trying to talk” to Droniak’s husband and tried to “copy off whatever I wore.” Droniak told her family “Don’t let Bertha in,” but warned that if Bertha comes to the funeral anyway, her family should “kick her out because I don’t need her.” When a TikToker commented on the post asking for more information about Bertha, Droniak replied, “That’s all I’m gonna say about her because I bet she’ll love this attention I’m giving her.”

Vlad Minchenko, an artist and tattooist in Bucha, Ukraine routinely wakes with trembling hands, a condition that temporarily keeps him from practicing his talents. Instead, he uses this time to gather bodies from the streets in his hometown. He’s collected more than 100 bodies to date, despite being confronted and threatened multiple times by Russian troops. Minchenko also assists families by digging graves for the deceased.

A FEMA SNAFU? Surely not.

As you all know (because we and every other deathcare outlet told you), the Federal Emergency Management Agency (FEMA) emergency funeral program to reimburse families for funeral services provided for COVID victims very specifically outlined what products and services were covered. Flowers, catering services, and obituary placement were NOT on the list. That didn’t stop some applicants from asking for reimbursement for these items — nor did it stop FEMA from paying for them! According to a piece in the Washington Times, it’s not only flowers and food — FEMA has also approved register books, a horse and carriage, and tips paid to funeral workers. (TIPS!?) These errors were discovered by FEMA’s own investigators in 98 of 166 approved, paid, and subsequently audited applications.

This week in funeral films …

There’s another movie to add to your deathcare watchlist: The Wake. It’s a 20-minute movie about the Carpenters, a suburban family running a funeral business out of their home. While their parents are busy assisting families, the two Carpenter sons sneak out to explore the homes of the deceased. Although this synopsis doesn’t spoil the plot of The Wake, it does say that the movie “demonstrates just how prone to accidental gun violence we have become.”

Do you ever experience delays in obtaining death certificates because you’re waiting on a physician’s signature? If so, you’re definitely not alone. One Ohio funeral director estimates that doctors delay death certificates in roughly one-third of his cremation cases. His and other complaints prompted Ohio State Senator Steve Huffman to propose legislation that would penalize doctors who don’t sign death certificates in a timely manner. There’s no detail on what timeframe is actually “timely,” but perhaps the proposal itself will be enough to make grabbing those pens or clicking that electronic signature button a little higher priority for physicians.

Last week, a Connecticut man was sentenced to two and a half years in jail for stealing the skeletal remains of seven adults and two children from two mausoleums in 2015. Amador Medina pleaded guilty to counts of breaking and entering, disturbing a grave, and disinterment of nine bodies. In addition to jail time, Medina got two years of probation with a condition that he stay away from cemeteries. Medina was arrested after his neighbors complained that he was storing garbage bags full of dirt and human remains on his front porch. He told detectives that he was a “first-level priest, Tata Nkisi, in the religion of Palo Mayombe” and planned to use the bones for his religious rituals.