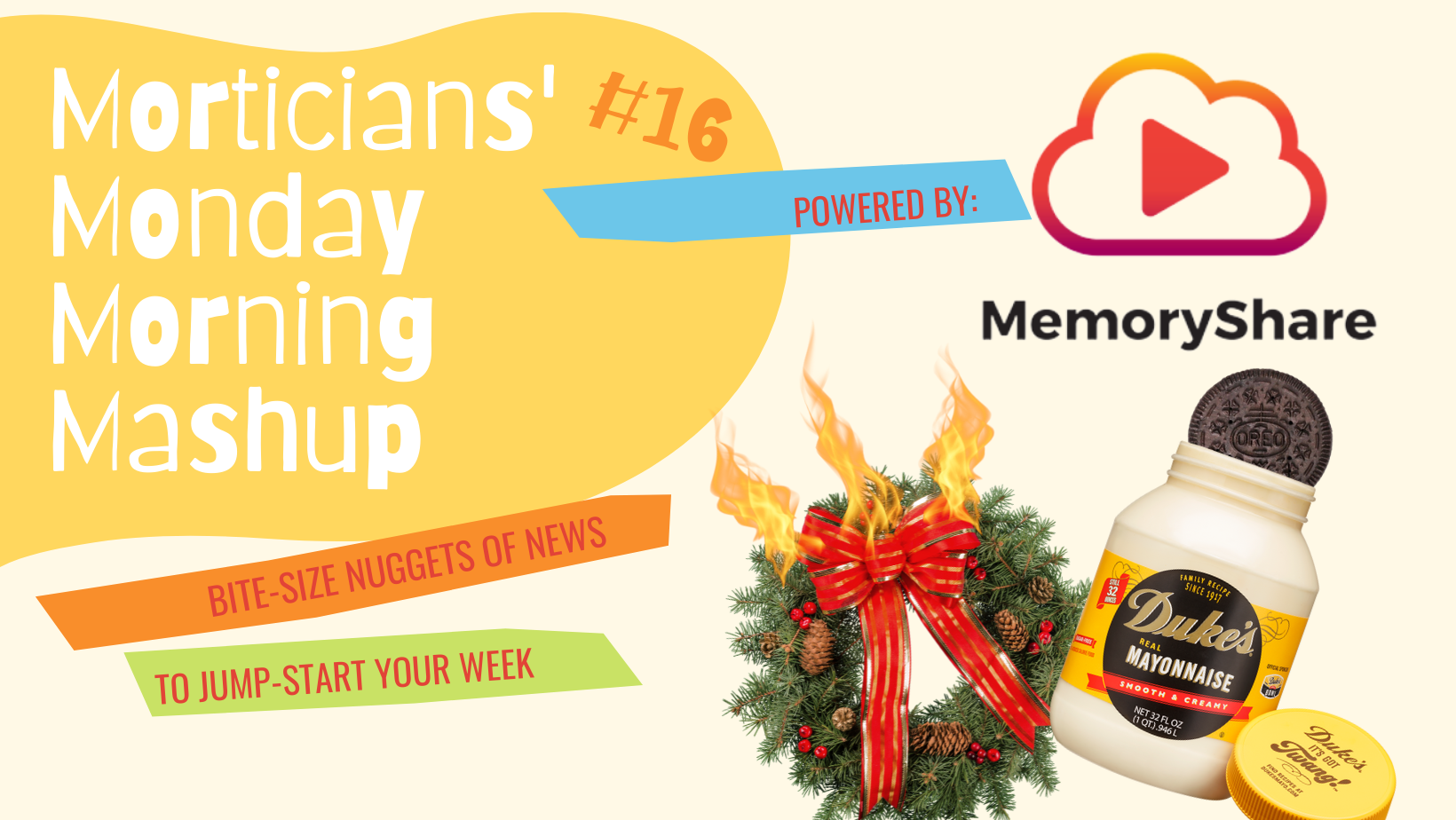 Welcome to the sixteenth edition of Morticians’ Monday Morning Mashup, where we’ll serve up bite-sized, easily-digestible nuggets of the deathcare news you need to crush conversations in the week ahead. Bon appetit!

Repos and Deathcare Go Together Like Oreos and Mayonnaise

If you watched ESPN’s Mike Golic, Jr. create (and consume) cringeworthy combos of beloved foods and mayonnaise during the Duke’s Mayo Bowl last week, you’ll get that these two things do NOT pair well. Neither does repossessing items from grieving families. A cemetery owner in Louisiana has reportedly removed gravestones from plots for non-payment of $75 installation fees. Families and local funeral homes have complained, of course, but apparently the cemetery owner is not responding.Can you image repossessing the products YOU provide? Just … no.

Is a Cemetery the Right Place for Eco-Activism?

A Pennsylvania man has been arrested for stealing wreaths from graves in a Maryland cemetery. His motivation? He told authorities he was “trying to save the earth and that plastic wreaths were non-biodegradable.” Here’s the kicker, though. In his effort to save the earth from these plastic wreaths, he dragged them out to an access road and SET THEM ON FIRE. Because releasing toxins into the air is a much better way to save the planet.

Meanwhile, on the 2021 Version of Amazon’s Yearly Departed …

In case you’re interested in watching yet another spoof on the world of deathcare, the sophomore episode of Amazon’s year-end review Yearly Departed is still available on Prime. Held at the fictional “Funerals ‘n Things” over-the-top gold chapel, the show is basically an all-female cast saying goodbye to the worst things of 2021. This year’s list included Zoom, being an a**hole, and hermit life — things most of us can agree we’re ready to be rid of.

But be warned: It’s not for everyone. This year’s version includes a liberal dose of politics (pun intended). They joke about 2021’s impact on climate change, abortion, essential workers … you name it. If you doubt me, just know: Jane Fonda delivers one of the eulogies. If you choose to check it out, don’t miss the introductory parade led by the one and only Sheila E — perhaps the highlight of the show.