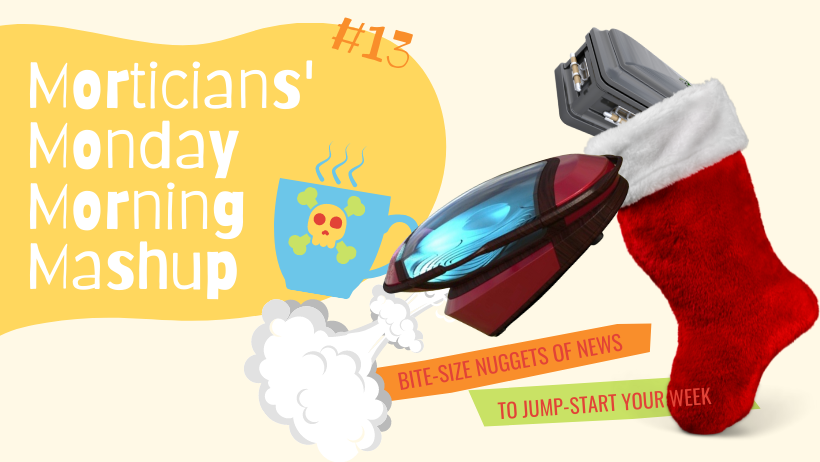 Welcome to the thirteenth edition of Morticians’ Monday Morning Mashup, where we’ll serve up bite-sized, easily-digestible nuggets of the deathcare news you need to crush conversations in the week ahead. Bon appetit!

No, This Futuristic Swiss Suicide Pod Doesn’t Kill You By Launching You Into Space

Switzerland is one of a handful of countries that legally allows physician-assisted suicide (as do Germany, Luxembourg, and Canada), so it’s no surprise that the handy folks who brought us the pocketknife that does everything have come up with an efficient way to do yourself in. It’s called “Sarco” and it’s the brainchild of a company called Exit International (!). The pod itself is created using a 3D printer and works by slowly removing oxygen from the air, leading to the passenger’s unconsciousness and death. You can read more about it here, but don’t look for the pod to arrive in the states anytime soon. Only two prototypes currently exist, and one of those is in a museum.

In March 2020, the Tennessee Department of Commerce & Insurance Division began investigating former funeral director and embalmer Reid Van Ness for not shipping bodies of deceased Hispanic individuals to their countries of origin as promised despite accepting payment from their families. Last week the Department issued a consumer alert alleging Van Ness — who surrendered his licenses during the investigation — was reaching out to Spanish-speaking families and offering his services.

As if that wasn’t bad enough, though, Van Ness actually issued the following statement to a Nashville news station reporting on the alert: “The news release is nonsense. The board of funeral directors and embalmers likes to put the cart before the horse. One, I do not solicit funerals from anyone. People within the Hispanic community call me, I don’t call them. It may be for help in obtaining funeral and or cremation services or resources to find rental or utility funds. The problem here is politically based and driven by the funeral directors not getting my referrals are upset. They don’t want to help these families. It’s too much trouble or they just want their money. Haters are haters. May God bless them.” Just … Wow.

Get Ready: “DeathTok” Is Now Officially a Thing

Last December Connecting Directors writer Diana Ionescu educated us on the growing number of morticians taking to TikTok to share their thoughts on all things death and embalming. If you thought that was a temporary fad, though, think again. “DeathTok,” as Mimi the Mortician has dubbed the phenomenon, is growing faster than you can say hashtag death positive. And it’s not just TikTok; funeral directors and embalmers on YouTube, Twitter, Instagram, and online magazines (like Wired Magazine’s “resident death expert” Victor M. Sweeney) are fascinating fans with their knowledge. People have questions about what happens when you die, and they’re not afraid to ask them — especially behind the veil of social media. Would you consider taking to TikTok to share what you know, or perhaps hosting a Reddit AMA? IMHO, it couldn’t hurt, if done well. What do you think?

Scots Want to Put Something Special in Stockings This Christmas

Looking for a unique holiday marketing idea? How about offering funeral gift cards! Imagine the look on Grandma’s face on Christmas morning when she finds a certificate for her prepaid funeral under her tree. Fosters Family Funeral Directors, which has 26 funeral homes across Scotland, believes that now, “at a time of year when thoughts turn to our loved ones, could the most thoughtful gift ease financial worries?” That gift, of course, is a prepaid funeral plan. What can we say — it’s definitely thinking outside the traditional marketing box, and fills the bill as a unique gift for that person who has everything.

Maybe the “Pizza Hut of Caskets” is a Better Tagline?

You may have seen what Vice calls the “modest avalanche of press” that Titan Caskets has generated over the past few months. Perhaps what you missed, though, was the roasting the company is taking on social media for calling itself the “Warby Parker of caskets.” If you’re not familiar with the online version of the eyeglass company, it’s famous for letting you order multiple pairs of spectacles and sending back the ones that don’t work. As the Twitterverse has hilariously explained, that’s NOT how a casket selection works. Just check out this post:

BTW, to be “5150’ed” is to be involuntarily detained for a 72-hour psychiatric evaluation — which your friends and family may actually consider for you if you order five caskets, try them out, and send four back.