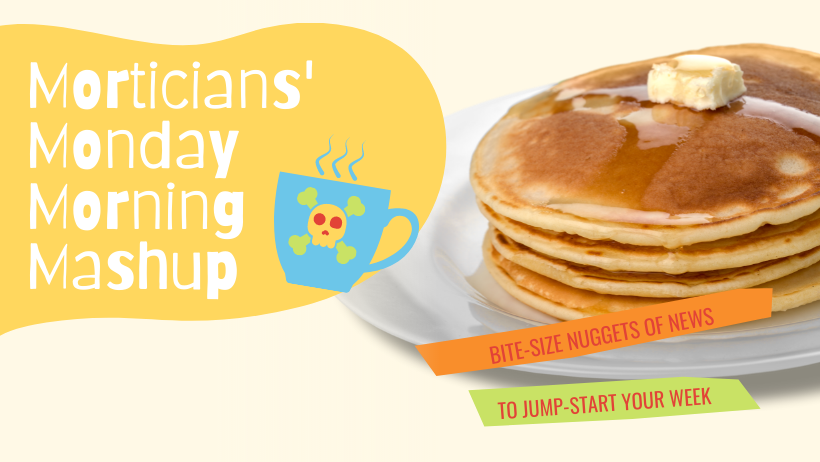 Welcome to the first edition of Morticians’ Monday Morning Mashup (aka 4M), where we’ll serve up bite-sized, easily-digestible nuggets of the deathcare news you need to know to crush casual conversations during the week ahead. Bon appetit!

Texas Embalmer Tells All on HuffPost

Nacogdoches, Texas-based veteran embalmer Patrick Huey, who won South Central Texas Funeral Directors Association’s first-ever Embalmer of the Year award in 2019, provided HuffPost readers a graphic description of the real-life daily horrors deathcare professionals have faced during the pandemic. He shares the terrible, but true, stories of 36-hour shifts, tremendously swollen patients, blood clots the size of pancakes, and septic saliva from ventilators’ adhesive patches. His narrative is a raw and real and rare public peek into the prep magic you perform that too few people appreciate or acknowledge.

Maine Mortician May Get License Back … in 10 Years

In June, Maine authorities shut down Ken Kincer’s Affordable Cremation establishment after discovering 11 bodies that had been unrefrigerated and emitting odors for up to two months. Also disintegrating was Kincer’s mental and physical health; he later attributed his neglect to personal issues, including grief over his sister’s terminal illness and the end of his 15-year-marriage, which led to deep depression and alcohol abuse. Last week, the Maine Board of Funeral Service agreed to let Kincer apply for a new license in 10 years as long as he can show he’s overcome his drug and alcohol issues.

Pocatello, Idaho authorities are dealing with their own deathcare debacles. First, the retort at Downard Funeral Home exploded during a March cremation. Next, a complaint led to unrefrigerated bodies, including 50 decomposing fetuses, a corpse in a body bag in a vehicle and another in plain view of students at a neighboring high school. Investigators found out multiple bodies meant for anatomical donation studies either never reached the program or never received proper disposition after being studied; they turned to the public for help with identification. This one is a mess, y’all.

A Rare Flower Grows Only in Historic California Cemetery

Cemeteries aren’t usually known for fostering new life, but that’s exactly what’s happening at Old Plainfield Cemetery in Plainfield, California. For the last three decades, the historic cemetery has been the exclusive blooming ground for a rare endangered flower, the Sandplain Gerardia. A tiny area within the cemetery grounds is the only site in the state where these flowering plants are known to grow, so state botanists keep a close watch on it.

Staff Sgt. Ryan Knauss, 23, died on August 26 in a bomb blast at the Kabul airport in Afghanistan. The family selected Mynatt Funeral Home in Knoxville, Tennessee to handle the soldier’s memorial service and subsequent burial in Arlington National Cemetery — at absolutely no cost to the family. Although government officials offered reimbursement for some transportation fees, Mynatt graciously opted not to be reimbursed. “We chose not to be concerned with those reimbursements and to serve this family without regard to what could be covered. To be clear about this matter, we are not charging for our services or the transportation,” Mynatt director Robert S. Rutherford said.