Bad News Is Traveling Too Fast: The Problem With Social Media, FindAGrave, and Instant Notifications 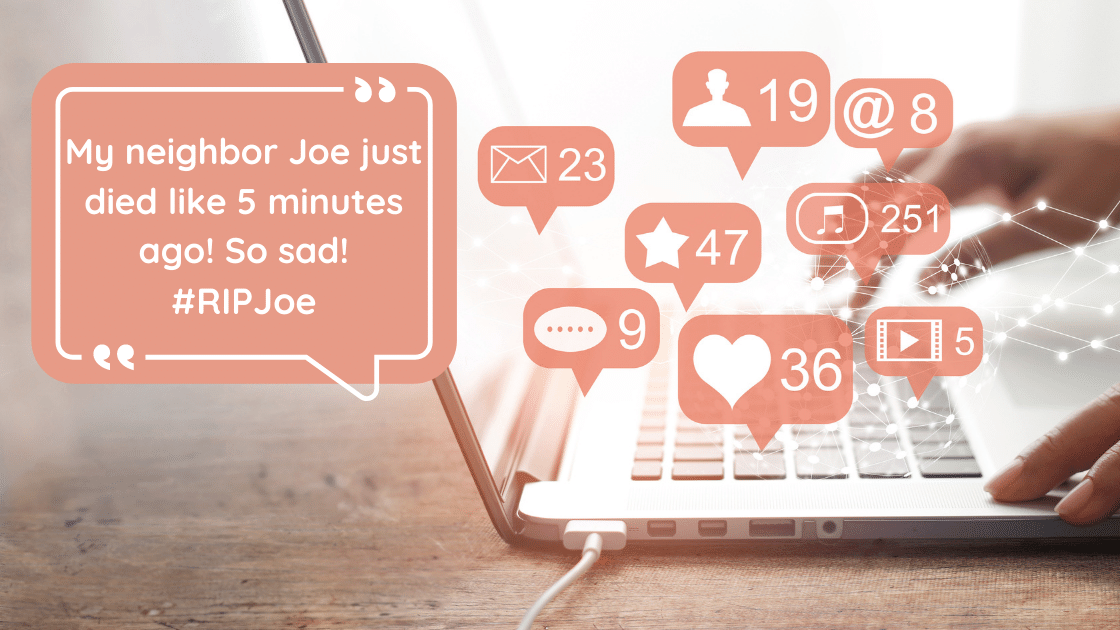 Bad News Is Traveling Too Fast: The Problem With Social Media, FindAGrave, and Instant Notifications

From his social media posts, you’d think one of my Facebook friends was a coroner, funeral director, or clairvoyant. I say this because rarely does a week go by that he doesn’t post something like this: “Pray for the ____ family. ___ just died.” There’s no telling how he learns of a death within minutes, but in this community at least, he’s often the first to share it . . . with his 2,000+ closest “friends.”

Of course, being able to share breaking news immediately or even live-as-it-happens is certainly a benefit of social media and the internet in general. Does anyone really pine for the days of having only morning papers and evening TV broadcasts as our sole sources of news? Probably not. However, shouldn’t there still be at least some boundaries when it comes to non-family announcing a death? Unfortunately, when it comes to social media and genealogy websites like FindAGrave.com, being the first to post a death notice trumps having respect for the deceased and their loved ones.

Whose news is it anyway?

For journalists, the conundrum of whether or not to publish names of the recently deceased is an ethical decision. The Online News Association, the world’s largest organization for digital journalism, offers these ethical guidelines:

News organizations that cover breaking news sometimes have the names of victims of crimes, accidents or disasters before authorities have notified their families. You might have names from neighbors, witnesses or even officials.

A middle position might be to wait until authorities have released names in most cases, but make exceptions if a person is prominent, if authorities appear to be delaying release of names for no good reason, or if you learn from family that the closest relatives have been notified.

Factors to consider in deciding your position in these cases are newsworthiness, the impact of reporting a death incorrectly if your sources are wrong and whether you would want to learn of a loved one’s death through the media.

The key phrase here might well be “the closest relatives have been notified.” With any death, anticipated or sudden, the first calls those present will make are to family and friends who were closest to the deceased. They’ll often make these calls even before they notify the funeral home.

We used to be OK with learning of a death this way. If the person was an acquaintance or distant relative, we’d hear about their passing through the next day’s obituaries. Today, though, your Facebook friend’s out-of-state grade school buddy may know your favorite uncle Joe died before you find out.

The issue of folks clamoring to be the first to announce a death isn’t limited to social media platforms. FindAGrave.com is an online directory of the burial sites of individuals. It’s a wonderful resource for genealogists looking for their ancestors’ final resting places. Volunteers create most of the 190-million-plus entries. A few years ago, noted genealogist and attorney Judy Russell appealed to FindAGrave to establish some parameters on its entries. Specifically, she expressed a growing frustration among families who found their loved ones’ memorials on FindAGrave inappropriately early.

Here’s an example Russell saw on Facebook and posted in her blog, The Legal Genealogist, on October 7, 2019:

In her post, Russell says she understands that yes, in this case an obituary had been published. And, of course, no one knows if the soldier in this instance would have found the FindAGrave post before being notified personally. However, Russell states, “no family’s decisions in a time of personal tragedy and grief should have to be made in fear of some stranger sticking his or her nose into their business.”

Her proposal to FindAGrave and its parent company, Ancestry.com, is to mandate a waiting period after a death occurs before a non-relative is allowed to enter the information on the site.

“It can be 90 days as I suggested — others have suggested 30 days, even a couple of weeks — but long enough to give the families of the recently deceased time to come to terms with their loss before an utter stranger is allowed to invade their space by adding a memorial to that website,” Russell writes in a December 15, 2020 blog post. “There is no excuse for not waiting. None.”

The volunteers who make these entries on FindAGrave and similar websites probably don’t mean to hurt anyone. Most likely, they think they’re doing a good thing by contributing and growing the much-researched database. They’re simply not thinking about the potential consequences, or how they would feel if they were in the family’s shoes.

We all know that humans are curious creatures, especially when it comes to tragedy and death. We can’t resist staring at accident scenes and can’t get enough of true crime documentaries. A 2020 study actually proves that negative information — “stories, videos or images that detail death, violence or harm” — results in a stronger “reward” from our neural circuitry than positive information. This study validates what we’ve always referred to as “morbid curiosity.”

(BTW, if you’d like to measure your own level of morbid curiosity, complete this survey from the University of Chicago.)

Another study explores the phenomenon of forming a connection with a deceased stranger, or emotional rubbernecking. These people aren’t experiencing the level of grief of a close friend or family member. Even so, they believe they can identify with them.

The hierarchy of grief

Both morbid curiosity and emotional rubbernecking are potential explanations for being interested in death notification posts. However, the question remains: What motivates strangers to post them? Who knows. Maybe they want to show they know more things about more people than you. Maybe it’s their own insecurities that drive them. It could be anything. But whatever it is, it’s not cool.

Announcing a death — on social media, in person, or anywhere — should be done tactfully, with respect to the family and the deceased, and by someone who is entitled to do so. That’s the bottom line.

Writer Taya Dunn Johnson was stunned to receive a call from a friend offering condolences within 90 minutes of her husband’s death. The friend also didn’t appreciate learning of the death on social media rather than from Johnson. However, Johnson had no idea the news had been “leaked.”

“Why would someone post it to Facebook SO FAST?,” she writes. “This isn’t breaking news, and you’re not trying to scoop TMZ. Give the immediate family or circle a little time to handle the immediate and time-sensitive ‘business’ related to death. While I can in no way speak for the entire planet, I certainly feel qualified to propose some suggestions — or, dare I say, rules — for social media grieving.”

Johnson proposes that social media users observe something she calls a “hierarchy of grief.”

“Please pause and consider your role and relationship to the newly deceased,” she writes. “Remember, hierarchy refers to your status and your relative importance to the deceased. I caution you to wait and then wait a little longer before posting anything. The person is no less dead and your sympathy no less heartfelt if your post, photo, or tweet is delayed by a few hours.”