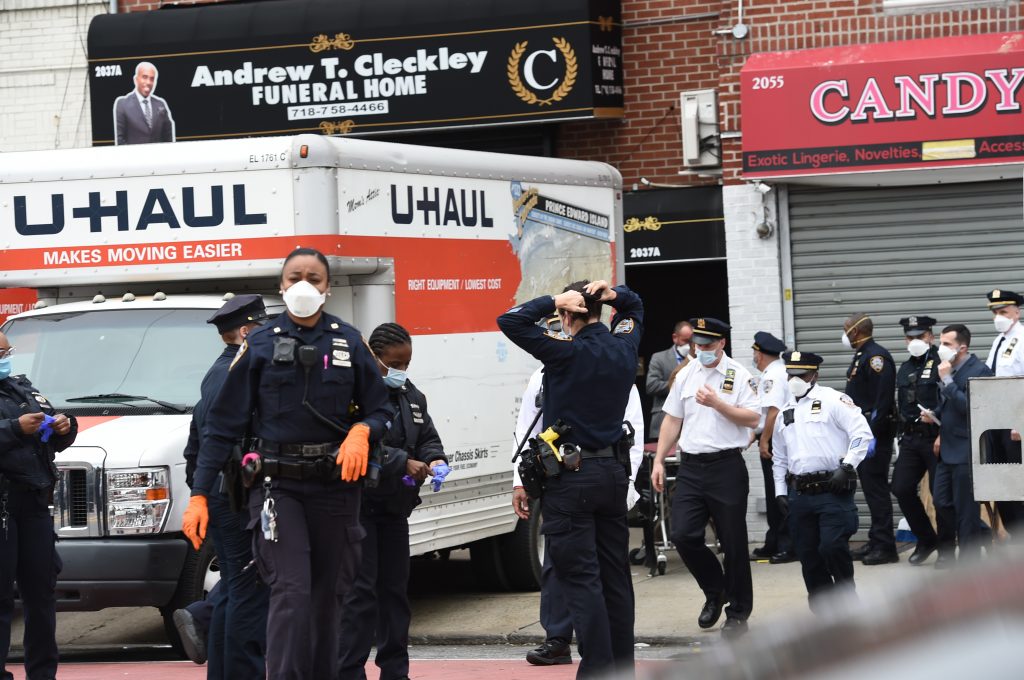 Those last two quotes were provided by New York City mayor Bill de Blasio on April 29, 2020. This is the same day police officers and health authorities swarmed and sealed off the funeral home property. They subsequently removed 63 bodies from the premises — including those stored in rented U-Haul vans.

“I have no idea in the world how any funeral home could let this happen,” de Blasio added.

Three months later, we’re getting answers to that question from Andrew Cleckley himself.

“What happened was the pandemic,” Andrew Cleckley told the New York Daily News on August 25. “No one was prepared. New York State did nothing to help us funeral homes. There was no protocol, no mandates, no guidelines, no phone numbers for us to call with questions.”

“People started dying at an uncontrollable pace,” he added. “All of us funeral directors were down here in New York City to fend for ourselves.”

While other at-capacity funeral homes turned away families, hospitals and nursing homes, Cleckley found himself unable to say, “No.” However, cemeteries and the five NYC crematories didn’t have that problem.

Cleckley said this forced him to look elsewhere for available crematories. He said he rented the refrigerated U-Hauls to transport the bodies to out-of-state facilities.

What did others do?

In an interview with a Brooklyn news station, Cleckley said “through tears” that things “just got out of hand.”

“The rate people were dying happened so fast,” he told PIX11 News. “Every funeral home across New York City had the same problems I had.”

While this is true, authorities did not suspend the license of any other funeral directors, as they did Cleckley’s in April. The staggering death toll and its impact on funeral homes in New York State was well-documented as many directors shared their struggles publicly.

Joseph Neufeld of Gerard J. Neufeld Funeral Home in Queens County said he held 250 funerals in April, up from a norm of 25 to 30. He offered direct burial or direct cremations with no embalming or viewing and transported at least 30 bodies a week to crematories in upstate New York. Clive Anderson, a director at Pelham Funeral Home in the Bronx, sent bodies to Connecticut for cremation.

“We’re very fortunate that we’ve been able to find a crematorium out of state,” Anderson told a local CBS station. “That way we’re not waiting four to six weeks to have a cremation done. We can do it within a few days, which means that we don’t have to store people here at the funeral home.”

Cleckley definitely wasn’t the only New York funeral director to run out of room in his facility and resort to external on-site storage.

Patrick J. Kearns of Leo F. Kearns Funeral Homes in Queens said on April 21 he had just purchased a 40-foot refrigerated shipping container. He told U.S. News & World Report he planned to park it in the driveway of one of his locations to “provide shelter for 30 more bodies.”

Hospitals and medical examiners’ offices also faced a storage crisis. The New York Times reported in late April that some hospitals had run out of body bags and “used forklifts to transfer piles of corpses into makeshift mobile morgues.”

Shipping containers and rental vans were (and are still) not an unusual option for any facility needing temporary body storage. The biggest difference? Cleckley’s U-Haul’s did not have refrigeration capabilities. PIX11 notes that Cleckley had first rented a refrigerated unit for $1200 a week, but it broke down. He reportedly used ice to preserve the bodies in the unrefrigerated moving vans.

“We are on a 24-hour schedule and then we have appointments and then the crematories cancel and then the bodies pile up,” he told an amNY reporter in May. “That happened the whole month of April.”

He’s also calling out five other funeral directors who were operating out of Cleckley’s location. He says he and his brother never sat down with families working with those directors.

“They paid other funeral homes,” Price told an ABC news station. “So these funeral directors are in charge of the burials, the cremations, the arrangements, the caskets.”

Price says his brother is only guilty of “being too nice to people.” He says authorities did not cite another “white-owned” funeral home which reportedly stacked bodies in their driveway.

“I would hate to say this is racially-motivated,” he said.

Cleckley’s fate is now in the hands of the state health commissioner, who will decide if the funeral home can reopen. Cleckley also faces permanent license revocation and a civil penalty of up to $68,000.

What happened at Cleckley Funeral Home in April has become a cautionary tale for directors. But it’s a story that bears examination. Perhaps only someone who was facing this completely unprecedented situation could understand.

New York was the hardest-hit state during the height of the pandemic. According to the CDC, from March 11 to May 2, 2020, New York City reported more than 24,000 deaths in excess of the expected average. Authorities attributed an estimated 78% of those excess deaths to COVID or COVID-related illness.

Other areas of the country faced similar problems. Arizona faced a potential storage crisis in July, as did Texas. Both states ordered refrigerated trucks and extra body bags from FEMA as a precautionary measure. Why couldn’t FEMA deliver the same to New York in April?

Crematories, like funeral homes, were admittedly backed up in New York, operating at capacity and by appointment only. Some directors found relief by transporting to crematories out of state. Why wasn’t this an option for Cleckley?

Most funeral directors do what they do out of a love and respect for other people. They’re compassionate service providers before they are business people. Cleckley denies profits had anything to do with his accepting bodies he knew he couldn’t deal with adequately. At what point would you have to say no?