“We are tied to the ocean,” John F. Kennedy once said. “And when we go back to the sea—whether it is to sail it or to watch it—we are going back from whence we came.”

When Brian Delf received his third cancer diagnosis, he started to seriously think about his death plan. A lifelong SCUBA diver and passionate advocate for marine conservation, Brian wanted a memorial that spoke to his love of the ocean.

A modern burial at sea

Although federal law allows some forms of burial at sea, Delf and his wife found that EPA regulations make it cumbersome for individuals to scatter ashes on their own. Eternal Reefs provided an answer.

Since 1998, the Atlanta-based non-profit has provided over 2,000 reef burials using their specially designed reef balls. The process “combines a cremation urn, ash scattering, and burial at sea into one meaningful, permanent environmental tribute to life.”

Eternal Reefs and similar companies use a pH-balanced, environmentally safe concrete mixture to make structures that store human or pet cremains, as well as small mementos or personal items. The “reef balls” are then lowered into the ocean at specifically designated sites, where they encourage coral growth, create habitat for sea life, and mitigate erosion and tidal events.

Recently featured on HBO’s Six Ways to Die in America, this creative burial-at-sea method is gaining traction with many people who view an afterlife underwater, surrounded by sea life, as an appealing alternative to underground burial. 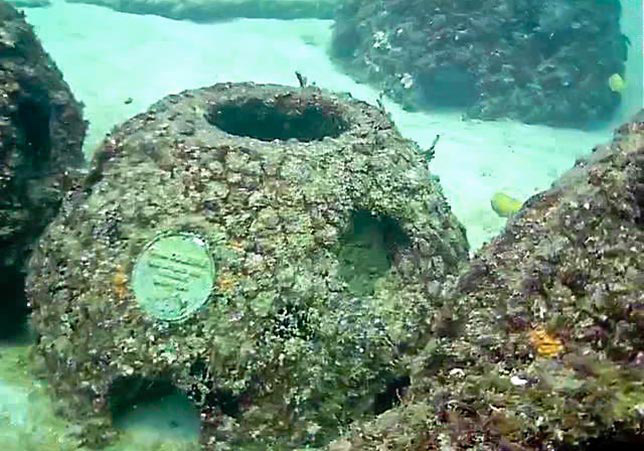 The sinking of man-made objects to accelerate coral growth is not a new concept, but our knowledge about how to do it safely and effectively has advanced. Decommissioned ships, commonly scuttled for this purpose, can leach hazardous chemicals and heavy metals into the surrounding water. The specially formulated concrete used in reef balls offers a more benign alternative.

“Strong, heavy, cheap, and readily available,” concrete closely resembles the composition of actual limestone coral, making it an ideal material for artificial reefs. Memorial reef companies claim the reef balls will last as long as 500 years, providing a habitat for myriad future colonies of coral, fish, and other sea life.

Customers can choose from several options for incorporating remains into artificial memorial reefs. At the more affordable end, the “community reefs” offered by Living Reefs house up to four sets of cremains and cost $875 per person. Other reef balls cost anywhere from $2,500 to $8,000, and can be deployed at a variety of publicly accessible, specially designated locations around the world.

Family members can personalize the reef balls with messages, handprints, or mementos inserted in the concrete. Loved ones receive precise GPS coordinates of their reef ball so they can visit in the future. 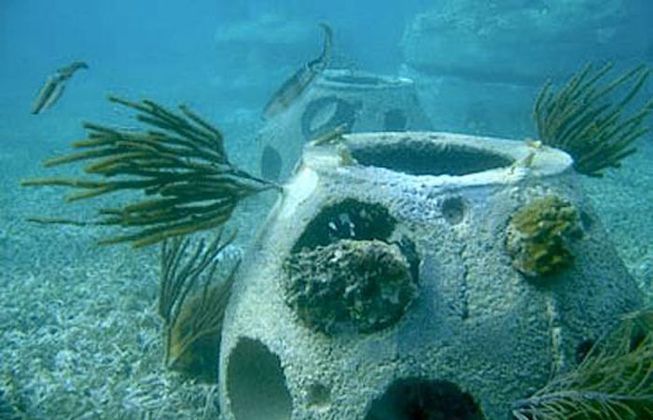 Like anything, memorial reefs come with their own set of environmental impacts, including the CO2 emitted through the production of cement and the environmental toll of cremation in general. Although cremation proponents tout the method as more environmentally friendly than a casket burial with embalming, the process still emits millions of tons of carbon into the air, along with not-insignificant amounts of harmful toxins such as mercury. The average U.S. cremation produces around the same carbon emissions as the consumption of two average tanks of gas.

A recent alternative, alkaline hydrolysis or “aquamation,” claims a tenth of the impact of fire cremation and is now legal in at least 18 states. Though the technology is still new and expensive, many funeral directors are enthusiastically embracing the new option and offering it as a more environmentally conscious alternative to cremation.

A man-made solution to a man-made problem

With over a quarter of the world’s coral depleted since 1990, artificial reefs offer one tool in the fight to counter the effects of pollution, overuse, and ozone depletion. The man-made habitats can help replenish sea life, revitalize local economies, and bring back struggling tourism and fishing industries.

After the 2010 BP oil spill in the Gulf of Mexico, the deployment of artificial reefs accelerated as money for recovery poured in and more organizations focused their efforts on cleaning and restoring the Gulf’s ecosystem.

Memorial reefs take the concept of artificial reefs one step further and give ocean lovers the chance to let their bodies, after death, actively participate in the creation of new life.