For most cultures that practice ground burial, the traditional coffin hasn’t changed much in design. Varying only slightly in material and color, coffins and caskets, like funerals in general, remain somber, bleak affairs. There is little room for color, humor, or personal expression … at least in most places.

In a small corner of West Africa, coffin-makers practice a uniquely colorful—albeit modern—tradition. In local spiritual belief, the souls of the departed, transitioning between worlds, can physically affect the lives of surviving relatives. Thus, keeping ancestral spirits appeased holds more than just symbolic importance. Ghanaian burials often include with the body small items and trinkets that serve as totems representing the profession or passions of the deceased. Funerals are lavish, days-long affairs that spare no expense to honor and celebrate the passing of a loved one.

Since the 1950s, Ga people have been commissioning “abebuu adekai” or “proverb boxes,” handmade creations shaped like animals, tools, vehicles, or other items of importance to the deceased. These “fantasy coffins” update the ritual of personalizing burial in a spectacular way. Unlike other cultural practices with origins mired in legend and mystery, Ghana’s fantasy coffins—or, at least, their modern popularity—are easily traced back to one ingenious craftsman.

Seth Kane Kwei wasn’t exactly in the business of making coffins. A carpenter in 1950s Accra, a local chief commissioned Kwei to build a cacao bean-shaped palanquin, or decorative carrier, a practice common among Ga leaders since the early 20th century. When the chief died suddenly before putting it to use, Kwei suggested that the palanquin could still serve its purpose as the chief’s burial casket. 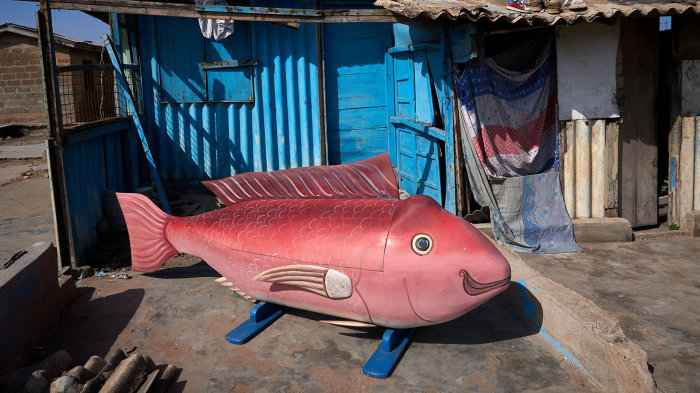 When his own grandmother died a few months later, Kwei decided to honor her lifelong fascination with airplanes and unfulfilled desire to experience flight by burying her in an airplane-shaped coffin. Soon, people started requesting their own versions of the personalized coffin, and a new business and local tradition was born. Kwei has since produced fantasy coffins shaped like automobiles, candy bars, soda bottles, fruit,  and fish. The coffins reflect the professions, hobbies, and aspirations of the deceased, and Kwei makes each to order within weeks.

After Kwei set the trend, other carpenters including his apprentices started producing similar caskets. Though still primarily built for practical purposes, the fantasy coffins have also gained a reputation as works of art, with examples exhibited in galleries and folk art museums across the world. 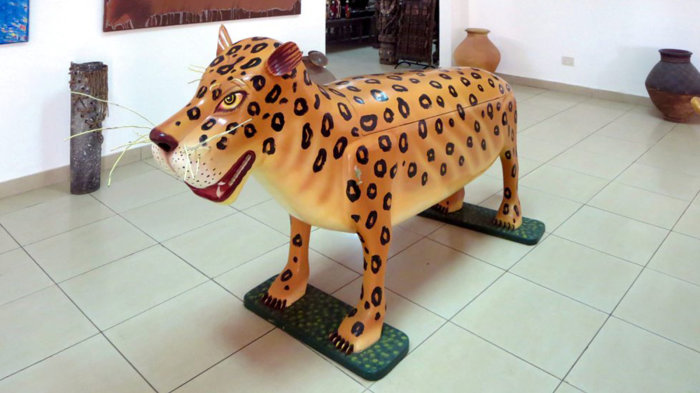 Although no other society routinely creates such fantastical caskets, people throughout history have built inventive coffins for a variety of reasons. During the Victorian era, when being buried alive was a common fear, some caskets included bells, tubes with trumpets, and other gadgets designed to let the purportedly-deceased alert the outside world if they woke up to realize they’d been prematurely interred. One type of coffin even claimed to eject you out of the earth in the event of early burial. Others featured mechanical fans that would pump fresh air into the coffin while you await rescue.

The cremation urn industry boasts a more robust array of “creative” options. Because cremains face fewer logistical and legal restrictions than bodies, urns can easily take a variety of shapes and forms. In addition to a variety of novelty shapes, you can also choose an urn shaped like the head of your loved one. If the Uncanny Valley effect is too much for you, Huggable Urns offers stuffed animals equipped with a pouch for cremated remains, creating a more interactive, intimate way of connecting with lost loved ones.

More recently the “green burial” movement has grown in popularity. Biodegradable urns offer an eco-friendly option for those who want to extend their low-impact lifestyle into the afterlife. Although human ashes don’t give nutrients to plants, products like the Living Urn provide a biodegradable and beautiful organic memorial that can hold more meaning than an urn stored in a cold stone columbarium. Those with an affinity for the ocean can even become part of an artificial reef by placing their ashes in specially designed “reef balls” that promote coral growth.

Seth Kane Kwei died in 1992. Luckily, his craft lives on through artisans like Paa Joe. Paa Joe was one of a Kwei’s protégés and is well-known coffin builder in his own right. Ghana’s fantasy coffins remain a regional specialty. However, their popularity in the country and neighboring Togo signals future growth for this imaginative and unconventional burial ritual.