In 17 Years, De-churching Millennials Will Rock the Funeral Industry…The Stats Are Shocking 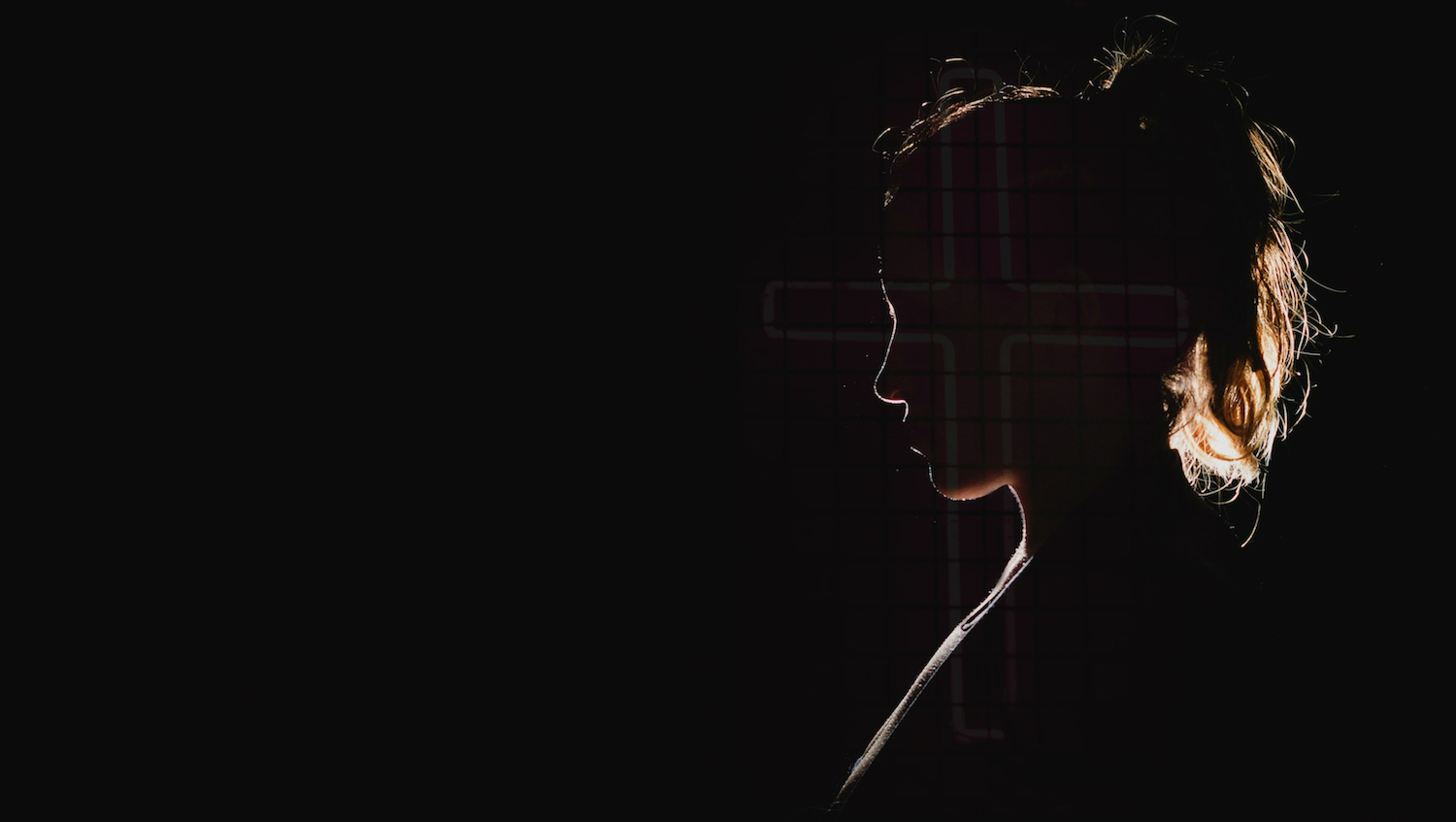 In 17 Years, De-churching Millennials Will Rock the Funeral Industry…The Stats Are Shocking

I am 30 years old. There are 10 weddings on my radar right now (weddings that already happened and are about to) and about half are being officiated by a friend or family member who got certified rather than a religious leader. When these people’s parents die, do you think they are going to hire a pastor? Absolutely not. Additionally, they will not want a casket (nearly all caskets just look like horizontal church-alters) and they will not be caught near a room with pews or crown molding. These future funeral planners will not even buy urns.

The de-churching of America is a modern phenomenon in which people are departing from the strict rituals and tenets of religion in masses. These de-churchers prefer to affiliate with “spiritual but not religious” or “religiously unaffiliated.” This movement has been slowly creeping up for the past few decades, but in the last few years, studies show religious departure launch to an unprecedented rate largely driven by the millennial generation.

The funeral industry is unique because it is typically not affected by cultural changes until decades down the road when the young early adopters’ parents begin to die. In one view, this is a major advantage because we can see the changes and proactively adapt before they begin to affect our businesses. On the other hand, if we don’t adapt, we subject ourselves to a self-inflicted anticipatory torture of passively speeding towards a cliff with no brakes.

What are the De-churching stats?

According to PRRI research, from 1990 to 2015 the number of people who identify as being “religiously unaffiliated” has risen from 8% to 24%. Another study by The Pew Research Center shows that 2012-2017 the share of Americans who describe themselves as “spiritual but not religious” has rocketed from 19 percent to 27 percent, while the share of those who identify as “religious and spiritual” has declined from 59 percent to 48 percent. These are dramatic changes for just 5 years. 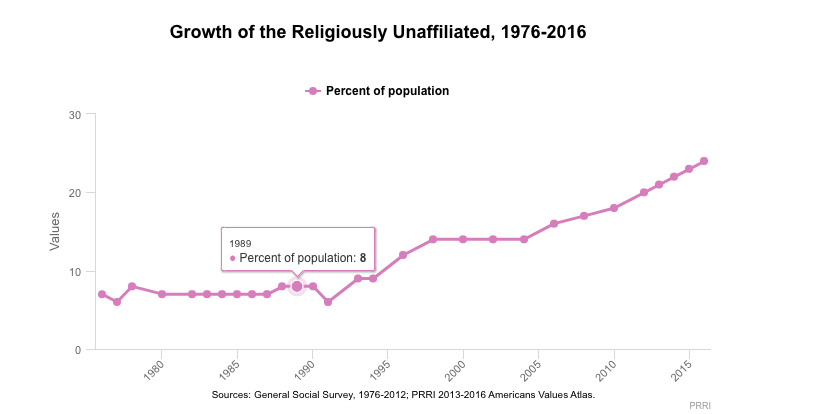 The departure from religion is not radical news to the death care space – we are all aware of trends away from traditional services, towards the hyper-personal memorial, and funeral homes that look more like event centers – to name a few. That said, we were also aware of the slowly rising cremation rate but could not have predicted the 25% spike between 1995 and 2015. If the de-churching trends follow the path of cremation and at the very least it continues to rise at the same rate, we will have 54% of the population with no religious affiliation by 2035. If the departure continues to gain momentum, we could reach the 50% mark a decade earlier or more. 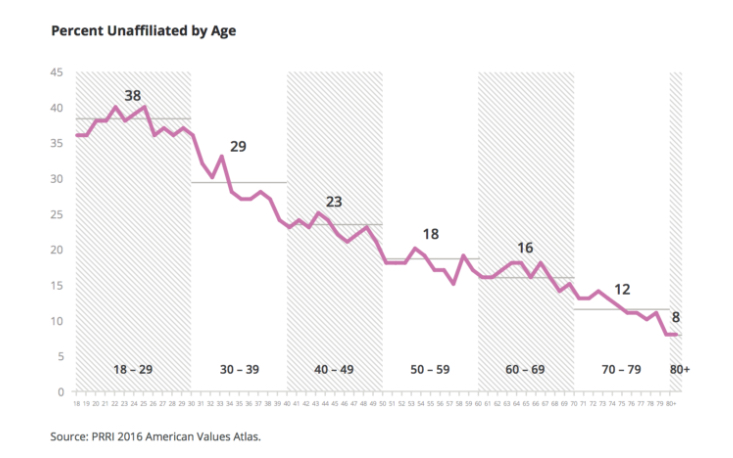 In the United States, the average life expectancy of both sexes combined is 79-years-old and the mean age for a mother to have her first birth was around 24 years-old in 1990. This means that the average age to plan your parent’s death is around 55. The trend of departure from religious affiliation began around 1990, making the early de-churching millennials 28 years old today. Taking into consideration Health Adjusted Life Expectancy (HALE) which is 69-years-old in the U.S., millennials will be 45 when a noticeable number of them begin to plan their parents’ funerals.

We have 17 years to prepare for the impact that de-churching millennials will have on the funeral industry.

The UK is often about a decade ahead of the U.S. on trends including the cremation rate and the stability and state of the funeral industry. Looking at their de-churching stats, we can see that as of 2017, 53% of their population claims no religious affiliation.

The Guardian reports, “Many within the [Church of England] have warned that its resistance to same-sex marriage, and the difficulty of some churches in accepting LGBT Christians, have alienated almost an entire generation of young adults. Some young people also view the C of E as failing to embrace and represent the diversity of 21st-century Britain.” The number of religiously unaffiliated youth is staggering – nearly 75% of 18-24 year-olds in England say they have no religion.

Terry Sanderson, president of the National Secular Society, told The Guardian: “These statistics indicate that the time has come for this country to have a serious debate about the place of religion in our society.

The Death of the Cremation Urn

There is a visible conflict in the rising cremation rate paired with de-churching trends and it centers around an unexpected object – the cremation urn. Cremation containers are not historically exclusive to one religion. The earliest cremation containers date back to 7000 BC and have been used by nearly all people who carried out a cremation over the last 10,000 years, regardless of religious affiliation. Recent history, though, ties urns closely with death rituals which feel religious even if the object itself is not married to a singular belief. This religious feeling could have a major impact on developing cremation rituals.

Over the next 20 years, we could see the sales of traditional cremation urns sharply drop. IBIS World reports that the cremation merchandise space is a $500MM industry annually in the United States. If 2/3’s of that is attributed to cremation urns, we can place the U.S. cremation urn market at $333MM. If urn sales do begin to plummet, it is unlikely that the money spent on them will simply vanish into the wind with the ashes of your grandmother… 10,000 years of history has confidently proven we want to keep cremated remains (at least for a little while). Instead, we might see a shift in consumer spending in the marketplace from the traditional-looking urn towards religiously neutral cremation containers and a continued rise in popularity of cremation keepsakes like jewelry, scattering jars, ashes-in-glass products, and biodegradable urns.

What Can We Do to Prepare?

The expedited de-churching of America might be new, but we’ve been feeling the early effects for decades and most funeral homes have already taken steps to adapt to changing customer preferences. If you have been avoiding the trends, hoping they will retreat, this is proof that they are here for the foreseeable future.

It is in this new religious unaffiliation that we find the “new” old traditions coming back,” explains Jody Herrington, General Manager at Strong-Thorne Mortuary in Albuquerque, NM. “Home funerals, Memorial Services in the park, Green Burials, these are just a few examples of ways in which the focus is taken away from a higher power and placed directly on the decedent where it belongs. It is in this kind of funeral where true healing begins for the non-believer. The authenticity found in this kind of service can lend itself to allowing the creative juices to flow. In planning the religiously unaffiliated service, both director and family can discuss their way to simple yet meaningful and magical experiences. By that same token, these services can be off the wall, overboard, lavish events that will take your breath away. That is the point. So what effect will the de-churching of America have on the funeral industry? I think it will have two effects. For brave funeral directors, it will open their eyes and their imaginations to any possibility and allow them to make their families extremely happy for having trusted them. For stubborn funeral directors, it will be a burden because they will have to use their imagination, which may have already atrophied.

The de-churching of America is not a death sentence for the funeral space, it’s an opportunity. Industries evolve with time and the funeral industry has been pretty fortunate when considering what has happened to the taxi industry, hotels, the mom-and-pop corner stores, and, soon, package delivery and the fossil fuel automobile. That said, the industry is not immune to disruption and we need to be proactive to ensure the future generations who are managing our funeral homes… have funeral homes to manage at all.

It is important to consider your own community when thinking about preparing for the de-churching millennials. Some communities were ready for the shift a decade ago and some won’t be ready for 30 more years. It is also important to consider your specific business’s target customers with an eye on the future. If you are a home that focuses on serving just Catholic families, it might be time to broaden your scope to accommodate social changes. Alternatively, you could double down with a laser focus on serving only Catholics who bury.

What will the de-churched future of death care look like? Here are some ideas and actions you can take today to prepare.

Terminology has the potential to put a huge strain on the funeral industry if it is not carefully designed moving forward. Using religiously-neutral terminology for aspects of death care that have become associated with religion or ritual will be crucial. As a starting point, when working with religiously neutral customers we can use “cremation container” instead of “urn.” and “life celebration” instead of “funeral.”

As a long-term shift, serious consideration needs to be given to the term “funeral home” – It needs to change. This is not so easy because you want the name to be confidently dedicated to end-of-life, but not suggest that you follow the (religious feeling) funeral rituals of the past. A good alternative starting point could be “Life Celebration Centers”

Another consideration is the timing of this proposed name shift. If you are a funeral home that tends to have more religious-affiliated families, your terminology shift might be 10-20 years out. If you are currently serving a high number of non-religious families it would be a great strategy to make the name shift now and become the go-to business for religiously-unaffiliated people in your community.

In addition to rebranding terminology, the overall end-of-life experience needs an update. I would go out of my way and pay more to find a funeral home that doesn’t feel like a funeral home – and if I can’t find one I’ll make one up. My desires are aligned with many future millennial funeral planners.

We need to start from scratch and redesign the entire experience for a religiously-unaffiliated future and for the modern standards of customer experience. This means, no more peg-board accessory displays, no more church pews or crown molding, no more cheaply-made brass urns with unreasonable markups, no more vacuum cleaners that emit a “fresh” scent as you clean (and obviously no more carpet), and…this is a big one…no more wearing ties to work.

This one is pretty straightforward: Liquor licenses can take 5-10 years to obtain, so apply for one now.

I want to drink at my dad’s end-of-life celebration and if I can’t do it at an end-of-life business location then I’ll haul his corpse into a pub.

Find Alternatives to the Traditional Urn

Take a look at your current product selection and tally up what percentage of it has a religious feel versus religious neutrality. Your findings should reflect your clientele – you don’t want to be showing your 50%religiously-unaffiliated customers a showroom with 90% status of angels, urns, and crosses.

As the religiously-unaffiliated U.S. population approaches 50% this selection should begin to shift on the side of cremation jewelry, cremation containers like wood boxes, environmentally-friendly “urns”, local artist-made options, and for burial, a non-traditional style casket like Able Caskets.

Considering the $333MM spent on cremation containers each year, the key to cremation merchandise success in a de-churched future will be finding urns that don’t look like urns.