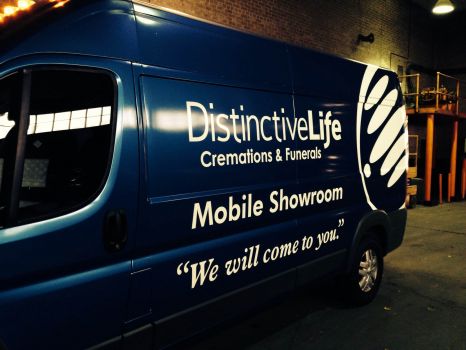 A Houston company is touting a service they say is the first ever in the United States, one that they will take some of the stress out of losing a loved one.

Distinctive Life Cremations & Funerals is rolling out the first mobile funeral home showroom next week. The Houston-based company, founded by Jeff Freidman, has transformed a late model cargo van into a shopping experience on wheels, with a selection of urns and memorials for families to choose from. The company has five locations around Houston.

Since the van comes to you it takes some of the pressure of going to a funeral home off of the backs of those that are grieving, says Friedman.

“From The Woodlands to Galveston we can serve anybody. We don’t have normal office hours and we will come to you,” Friedman says. They will also make visits to a hospice if the family would like to make a selection while they have everyone together in one place. A trip to a funeral home, with the soft lighting and dour mood is now something that few people are looking forward to.

The death industry as a whole is moving towards cremation, and companies like Distinctive have to evolve with the wants and needs of the public. Distinctive also uses iPads for sales presentations. Distinctive still offers caskets to customers who prefer them.

“In mortuary school they actually teach us how to sell the most expensive casket,” Friedman says. That fact is why he says most people are moving towards the cheaper cremation process.

He started Distinctive in 2012 after he realized that the industry was moving away from funeral homes and into funeral directing. He has over 20 years’ experience as a funeral director.

Two decades ago only 15 percent of Americans were asking to be cremated when they expired. These days it’s about 40 percent. Friedman says that in just two years one in two Americans will be opting for cremation when it comes to making their final plans.

Friedman says that younger Americans don’t have the same view of death as previous generations. They see death as a reason for celebration and remembrance. Even a party. They have a more practical view of death and are less likely to want to be disposed of in a giant metal box.

“We like to think out of the box,” jokes Friedman. Want an alligator skin urn? Friedman has you covered.

One of the most interesting urns in the van is one shaped like a giant seashell. Remains can be placed inside it and loved ones can place it in a body of water where it will float, slowly dissolving along the way. Gone are the days of clumsily spreading dad’s ashes on the water and a gust of wind turning your clothes and hair into his final resting place.

There’s also a biodegradable urn that can be buried under a tree or mixed with wildflower seeds to create a natural memorial.

If you want your ashes shot into space, Distinctive can help there, too. They have a partnership with Houston-based Celestis Memorial, which has been in the business of sending your cremains into space since 1997. Celestis has been sending small canisters of ashes into space so the deceased can touch the tip of the universe, orbit Earth, be attached to a satellite, or come crash back to Earth as a matchstick sized sizzle.

Friedman says that the cargo van gets photographed everywhere it goes, with people of all ages taking selfies outside the mobile showroom. Some even ask if they can buy an urn off of it. It’s the food truck concept, albeit a bit more expensive, or somewhat morbid. A woman in Dallas followed the van for miles just to stop it so she could make arrangements to purchase an urn. You can’t buy one, but you can place an order.

These days’ popular urn concepts have included ammo cans, jewelry boxes, and now with 3-D printing Distinctive says that make most anything an urn. Some families are opting for jewelry you can wear, with a scoop of cremains inside a locket.

As Generation X and Millennials head off into eternity after baby boomers, Friedman says that the funeral industry has to change with the times. There are destination funerals, services in bars, baseball games, hot air balloon shows.

“The days of six pallbearers and sad organ music are probably coming to an end,” Friedman says.