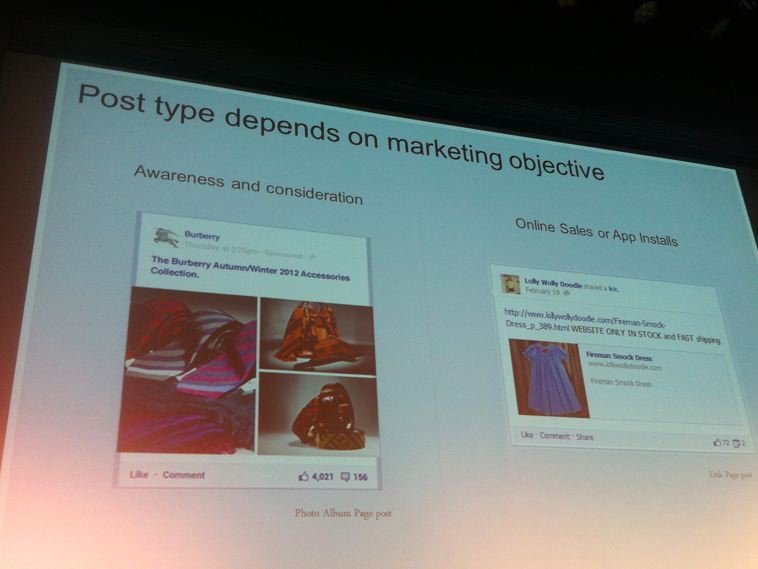 Facebook is in full on money making mode. Their stock performance is less than awful so they are back focusing on increasing ad revenue. This is great for funeral homes trying to embrace the world’s largest social network.

Its great because now Facebook is letting some of the secrets out of the bag. Really they shouldn’t be secrets because we have partnered with DISRUPT Media who has been openly sharing many of these secrets with funeral homes for months. Secrets like, paying for fake fans or getting fans through hokey gimmicks is a waste of time and money. 10,000 fans doesn’t mean anything if they aren’t engaging and spreading your funeral home’s message.

But why listen to us when you can hear it straight from the horses’ (Facebook) mouth.

Throughout his presentation, Rajaram kept putting up slides listing “common mistakes” people trying to market their brands and products on Facebook make.

Here is the list of ”common mistakes” people trying to market their brands and products on Facebook make (explained brilliantly by Business Insider).

Acquiring low-quality fans through incentives or gimmicks.  Rajaram said it’s very important for brands to have a well-maintained brand page that has fans, but that those fans shouldn’t be fans because of tricks.

Focusing on pure quantity of fan acquisition. The point of having fans is that they are supposed to amplify your brand messaging. If focus on getting a huge horde of fans that don’t actually care about a brand’s products or brands, no way will they share that brand’s message.

Using the same post type across all marketing objectives. It’s easier to explain what he meant with a picture:

Not thinking deeply about feed and mobile distribution.  Rajaram said marketers are focusing on those crappy ads on the right side of Facebook.com pages. He would like them to stop it. He says they should buy ads for the News Feed, which is where users are actually looking, and works on mobile too.

Focusing on posts, but not on user stories. The advantage of Facebook ads in the News Feed is that when a user interacts with them, it creates a new kind of ad unit that user’s friends will see. These are “user stories.” Rajaram says those units actually perform better than the original ads, but some brands don’t pay up to spread them around. Mistake!

Relying purely on organic distribution. Translation: some brands use Facebook brand pages but don’t buy Facebook ads to promote them. He would like these brands to stop that.

Thinking that Facebook ads don’t drive performance. Rajaram says everyone assumes Facebook is only good for awareness marketing. He says that’s not true. There is a company called PetFlow which Rajaram says gets 20% of its transactions and 30% of its new customers directly from Facebook.

Ignoring targeting and optimization. Through the new Facebook Ad Exchange, marketers can target, on Facebook, users who have visited their Web page in the past. Rajaram thinks marketers don’t do that enough.

Focusing on short term performance. At one point, Rajaram told the audience it was their “job” and their “duty” to figure out how to make social marketing work. Do not give up so quickly!

There you have it. Straight from Facebook themselves. If you use Facebook correctly it works, but it’s not the field of dreams, you can’t just build it and expect customers to show up. You gotta get on the field and play the freaking game.