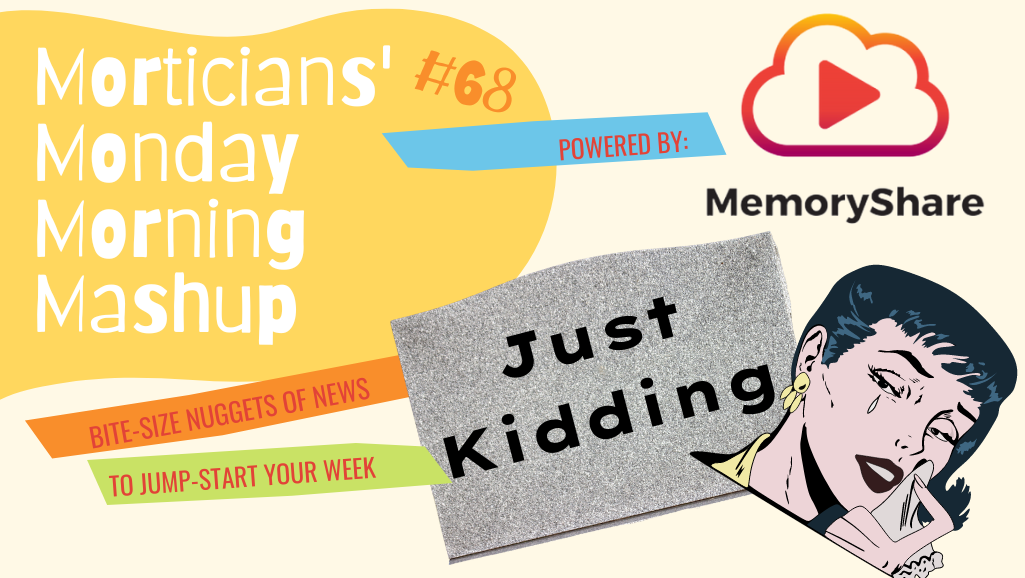 Welcome to the sixty-eighth edition of Morticians’ Monday Morning Mashup, 4M #68, where we’ll serve up bite-sized, easily-digestible nuggets of the deathcare news you need to crush conversations in the week ahead. Bon appetit!

A funeral home owner in India would like to expand the educational system in his country to include the study of death. “‘Death literacy’ has to be propagated via Thanatology as a subject or at least a topic that is integrated into the education system,” Rishabh Jalan, CEO & Co-Founder, Last Journey Funeral Services wrote in a recent op-ed. Jalan compares the potential inclusion of death studies in the curriculum to the recent addition of sex education. In his detailed argument, Jalan argues that ignoring thanatology in primary and secondary education is an “uncanny paradox” in such an “emotionally-driven” country with elaborate death rituals and “some of the world’s best forensic science curricula.”

Deathcare professionals are doing amazing things on TikTok, especially when it comes to educating the public on what you guys actually do. But there’s a new death-related TikTok trend that — like most TikTok trends — has become controversial, theoretically “dividing the Internet” (yes, again). Apparently, the hashtag “celebrity death prank” is trending. The prank, which is being called “disquieting, strange, pathetic” and “sick” involves people filming themselves telling someone else that a beloved celebrity or family member (!) has died, and waiting until the person reacts to tell them it’s a joke. Just … no.

What’s in a name?

If you’re fed up with the frankly boring names of most deathcare establishments, why not take a cue from this Singapore funeral service provider: Casket Fairprice? Perhaps something is lost in translation, but it looks like this funeral home’s claim to fame is — you guessed it — fair prices. Casket Fairprice’s website promises “transparent pricing” and that “all prices listed are nett!” [sic]. So yes, apparently in Singapore listing your prices online isn’t such a big deal, and neither is bragging about it.

Does this venue make me look dead?

Some New Jersey bridezillas — and groomzillas, for that matter — aren’t happy with the recent renovations in the venue they booked for their future weddings. The “once-golden room with ornate chandeliers” at the Madison Hotel has been “transformed into a black-walled and blue-carpeted space” that couples are calling “gothic beach house” and “beautiful … for a funeral home.” You can judge the aesthetic for yourself — and perhaps glean some design inspiration — from the venue’s Instagram post, below.

Grieving in the MCU

As someone who ugly cries when a beloved character dies in a TV show or movie (or when ESPN’s Gene Wojakowski narrates a super sad story about a dying athlete on College GameDay), I appreciate the fact that someone has taken the time to tie each of Kubler-Ross’ seven stages of grief to events in Phase Four of the Marvel Cinematic Universe (MCU). From shock and disbelief (stage one) in Black Widow to reconstruction (stage seven) in Black Panther: Wakanda Forever, it’s quite fascinating to see how grief and loss is accurately portrayed in comic adaptations.

Two things funeral homes need in 2023 are visibility and increased call volume. MemoryShare provides both of these things as well as a team of REAL people you can talk to if you ever run into trouble. So what are you waiting for? Learn more about  MemoryShare today!