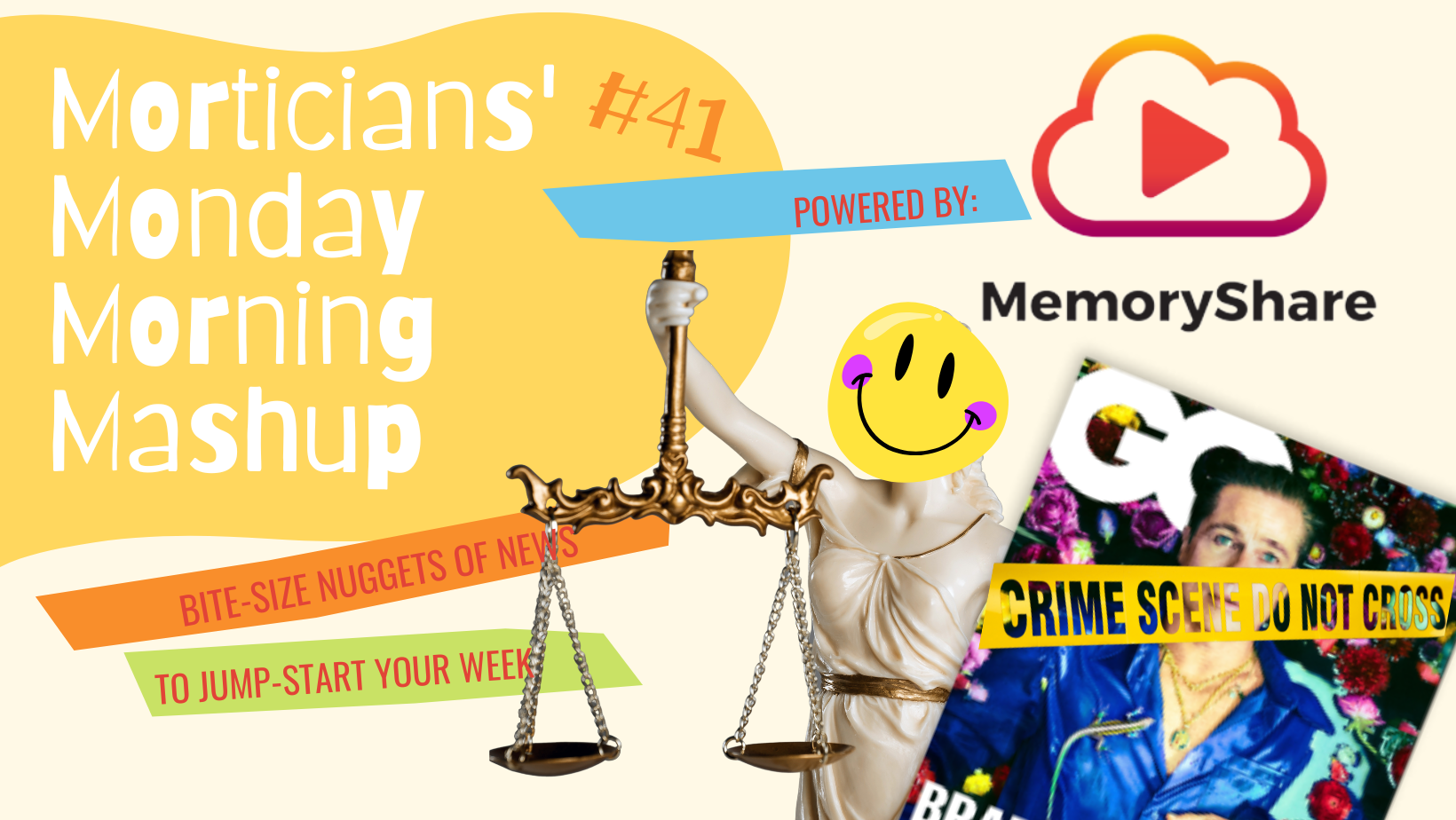 Welcome to the forty-first edition of Morticians’ Monday Morning Mashup, 4M #41, where we’ll serve up bite-sized, easily-digestible nuggets of the deathcare news you need to crush conversations in the week ahead. Bon appetit!

When a NYT writer pens your obit

When New York Times journalist Caity Weaver’s mom, Dr. Maureen Brennan-Weaver, died a few weeks ago, Caity did what only she could do: Write one helluva(n) obituary. Caity posted the tear- and laugh-inducing obituary on her Twitter feed on June 22 with the narrative, “Got the worst news I’ve ever gotten last week. My mom and I made each other cry laughing all the time. I hate to think about all the deals she’s going to miss out on. I hope she guides me to the best sales forever.” The post has garnered more than 32,000 likes and has been retweeted nearly 1,000 times.

A cemetery, an assault rifle, and a firebrand pastor

A group of Sioux Falls, South Dakota folks attending a cemetery association meeting at the church adjacent to the graveyard on June 12 were surprised to be greeted at the doors by armed guards — and to find an AR-15 assault rifle in the church closet. The meeting was supposed to settle an ongoing and escalating dispute over who legally controls the cemetery — the association or the church. Some cemetery association members aren’t happy with the church’s outspoken pastor, who since 2019 has brought the church back from “the brink” of death with his bold stances on social issues and recitation of the Pledge of Allegiance during Sunday Services. It looks like it’s now up to the attorneys to settle the arguments and lawsuits.

In 1921, two days of racial violence resulted in the devastation of homes, businesses, and lives in a prosperous Black neighborhood in Oklahoma. In what would become known as the Tulsa Race Massacre, white looters and arsonists caused millions of dollars in damage and took hundreds of lives; the burned bodies of many unidentified victims were buried with the hopes they’d be forgotten. In 2021, 14 sets of remains were exhumed in the hopes of identifying as many as possible, and last week, viable DNA found in two of those sets puts researchers a step closer to achieving that goal.

Also last week, the Army disinterred a grave thought to be holding the remains of 13-year-old Wade Ayres, a Catawba Native American who died in 1904. The grave was disinterred in an effort to identify unidentified remains of Native American students who died while being forced to “assimilate to white society” at Carlisle Indian Industrial school in Pennsylvania from 1879 to 1918. Last week’s disinterment revealed that Ayres’ grave held not a 13-year-old boy, but a 15- to 20-year old female. The exhumed female body was reinterred and marked as unknown.

The Twitterverse has reacted to GQ Magazine’s August cover featuring Brad Pitt, and they brought embalmer jokes. Apparently, the consensus is that Brad’s waxy face looks like the work of the “worst embalmer ever.”

A widower’s complaints about a StoneMor-owned cemetery, which first aired on a Memphis TV station’s Problem Solvers segment last summer, have resulted in more than 30 disciplinary actions against the company — which is three times more disciplinary actions than the Tennessee Board of Funeral Directors issued against StoneMor properties in the previous 12 months. Widower Eddie Hayslett’s segment on WREG-TV about Forest Hill Funeral Home and Memorial Park East not only prompted others to file complaints but also caught the attention of a state senator, who applauded the Problem Solvers segment for its role in prompting improvements. “For public knowledge to know what’s happening and going on is important and I think did play a big part in their reaction and in getting them making improvements,” the senator said.

Ohio funeral legalities will change in September when a new “consumer-friendly” and “business-friendly” law takes effect. Among other updates, the new law REQUIRES:

Lastly, the law also authorizes hearses and an escort vehicle to add a “flashing, oscillating, or rotating purple light” to their current amber lights.